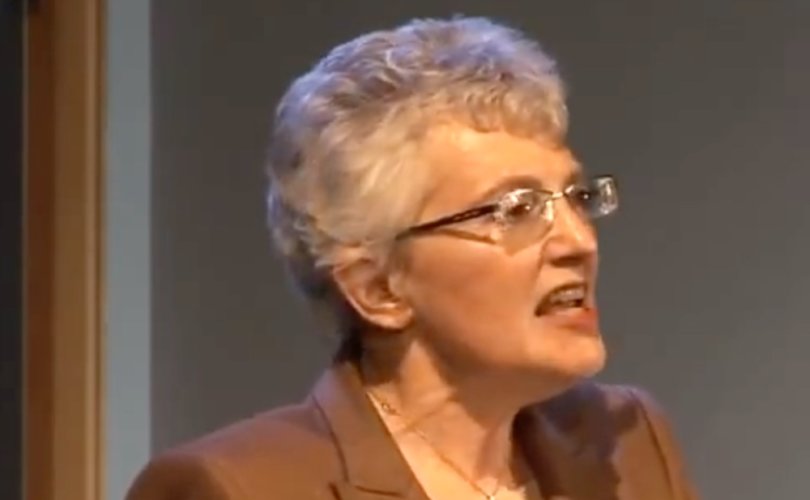 COPENHAGEN, Denmark, March 2, 2018 (LifeSiteNews) – An Irish government official has warned the country’s Catholic Church that homosexual partners should be “celebrated and not excluded” from the upcoming World Meeting of Families (WMOF) in Dublin later this year.

“LGBTI families, like all families, should be celebrated and not excluded – that’s the message that should be coming not just from the World Meeting of Families, but from all who believe in justice, equality and fairness,” she said.​

“Equality is hard-fought, difficult to achieve, but more importantly it is also very fragile,” Zappone went on. “As campaigners, as activists and as governments, we must ensure that no gathering, group or individual is ever allowed to undermine these rights.”​

Zappone said all facets of public life must be inclusive.

“There should be a welcome for all,” the Irish Government Minister said, and, “never again should public statements or remarks which seek to isolate certain families be tolerated.”

“The leadership of Pope Francis has given hope to many,” said Zappone, and recent efforts “to exclude our former president Mary McAleese from an event in the Vatican, together with the airbrushing out of images of LGBTI families from certain Church literature related to this event, is a source of serious concern.”

Zappone was referencing a recent dustup over McAleese having been reportedly struck from the speaking list of a Vatican conference by a Holy See official. The event slated for this month observes International Women’s Day and has been moved by organizers to a venue outside Vatican City.

She was also referring to the removal from WMOF material of the picture of two lesbians in an intimate embrace – the image had also been accompanied by text explicitly promoting homosexual relationships as a form of family.

Zappone made the comments while addressing a Conference on Private and Family Life for LGBTI People in Copenhagen Friday. The Irish Times covered a draft of her remarks prior to the address.

The World Meeting of Families will take place in August, hosted by the Archdiocese of Dublin. Pope Francis is expected to attend the event.

The WMOF has the Pope’s contentious exhortation Amoris Laetitia as its primary catechetical foundation.

The document continues to be the source of controversy due to its seeming tacit allowance of access to Holy Communion for couples living in objectively sinful situations – including divorced and remarried Catholics, those cohabiting and living in same-sex partnerships.

The WMOF gathering has been criticized for an apparent pro-LGBT agenda.

The text accompanying the photo with the lesbian couple stated:

“While the Church upholds the ideal of marriage as a permanent commitment between a man and a woman, other unions exist which provide mutual support to the couple. Pope Francis encourages us never to exclude but to accompany these couples also, with love, care and support.”

The text and photo was also placed below a heading in the WMOF promo material titled, “The Christian Vision for the Family.”

Aside from the photo and text putting the lesbian couple forth as a vision of the family, other WMOF promotional material put out by the Irish bishops had contained an interview with an LGBT activist saying she’s “upset” with Catholic teaching on homosexuality.

The video also contained an interview with another woman saying that the fact that she’s “gay” has “never been a huge problem in my family.”

It is part of a video in the WMOF promotional material titled, “God’s Mercy – No One Excluded.”

Dublin Archbishop Diarmuid Martin pledged last month that the World Meeting of Families will remain “an inclusive event, open to all families and family members.”

His comments came in response to the reported removal from the Vatican event speaker list of McAleese.

In an October 2016 speech preparing for the World Meeting of Families, Archbishop Martin declined to define family, saying, we must not “allow ourselves to be become entangled in trying to produce definitions of the family” because different cultural values mean family “cannot be defined simply.”

Last October Bishop Brendan Leahy of Limerick had said as well that homosexual couples must be welcomed at the World Meeting of Families.

Disturbed by the direction the WMOF is taking, a group of Irish Catholics is planning a conference to promote the Catholic Church’s constant and unchanging teaching on marriage and family life coinciding with two of the six-day WMOF event.

The Catholic Church teaches that marriage is the lifelong sacramental union between a man and a woman.

The Church also teaches that individuals who experience same-sex attraction, like all individuals, are to be chaste. Individuals with same-sex inclinations are to be accepted with respect compassion and sensitivity, the Church teaches, but homosexual activity is gravely depraved and can never be approved under any circumstances.

Various pro-homosexual factions continue to oppose the Catholic Church’s teaching on sexuality – including the Church’s catechetical language. LGBT supporters have also frequently leveraged Francis in their cause by way of his infamous “Who am I to judge?” comment, part of a response to a 2013 interview question regarding a gay priest and a gay lobby within the Vatican.

Zappone’s warning for the Catholic Church about the Church’s handling of the WMOF in regard to LGBT issues continued in her remarks for the Copenhagen conference.

Of the WMOF she said, “The international gathering is coming to a country where people want marriage equality, where adoption by LGBTI people is government policy, and where all families are fully respected. Organisers should reflect on that.”

Zappone also implied the WMOF should be used to advocate LGBT issues.

“The eyes of the world will be on Dublin,” she said. “Indeed some of the biggest audiences will be in countries where LGBTI people are discriminated against, threatened and abused.”

“The World Meeting of Families is a unique opportunity to confront such inequality, discrimination and hate,” stated Zappone. “It can provide global leadership on inclusion.”

The Catholic event for families should carry the message that LGBT families are to be celebrated, Zappone continued, saying as well that no group should be allowed to “undermine” the “right” to “equality.’

She also said that statements isolating “certain families” should not be allowed in public discourse.

“All aspects of our public life must be inclusive,” Zappone said. “There should be a welcome for all. And never again should public statements or remarks which seek to isolate certain families be tolerated.”