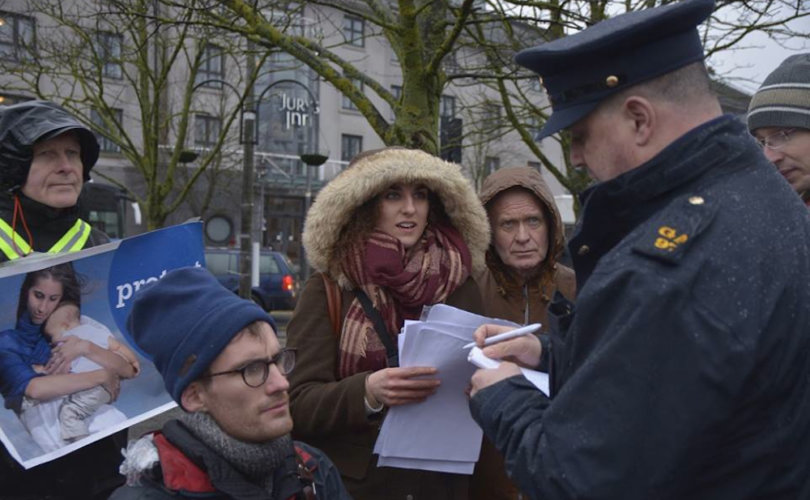 DUBLIN, Ireland, June 1, 2018 (LifeSiteNews) – With abortion no longer forbidden by its constitution, the Irish government is moving to ban pro-lifers from praying, protesting, or counseling outside of abortion facilities.

On May 25, the Irish people voted 66% to 33% to repeal the country’s 8th Amendment, which recognized a preborn right to life deserving of equal protection. Repeal did not directly legalize abortion, but cleared a path for a government proposal to legalize elective first-trimester abortions, with later abortions supposedly limited to medical emergencies or fatal fetal abnormalities.

Throughout the campaign, pro-lifers warned that the final law would be far more radical in practice, and now Health Minister Simon Harris has proposed a new addition to the plan.

Harris wants the final bill to include “exclusion zones” around abortion facilities, the Irish Independent reports. Details of the proposal have not been finalized, but he claims it will balance concerns about “harassment” with the right to expression and protest.

Supporters cite patients and families upset by pro-life protests and graphic images outside of hospitals as examples of why exclusion zones are necessary. 72% of respondents would support them, according to an Amárach Research poll.

Similar laws, also known as “buffer” or “bubble,” zones, are hotly contested issues in Canada, the United States, and the United Kingdom. Pro-life activists, including mothers who credit sidewalk counseling for convincing them to choose life, say it is vital to offer women considering abortion the information, alternatives, and support they won’t find inside an abortion facility’s doors.

If Ireland ultimately bans pro-life activism outside of abortion centers, it would represent the country going “full fascist,” according to The Daily Wire’s Paul Bois.

“Ireland is dead-set on killing unborn babies as soon as possible,” Bois added. “Even though abortion has not yet been enshrined into law by Parliament, lawmakers have actually proposed extending the summer session just so they can ram through the legislation.”

Last week’s pro-abortion victory was a source of deep grief for pro-lifers in Ireland and around the world. They blamed the country’s willful abandonment of the sanctity of life on a variety of factors, from the country’s declining religiosity to the compromise of every Irish political party to the silence of many Catholic leaders, including Pope Francis.

However, many have responded to the defeat with resolve rather than despair, vowing to continue fighting to affirm abortion’s evil and restore legal protection for the preborn.