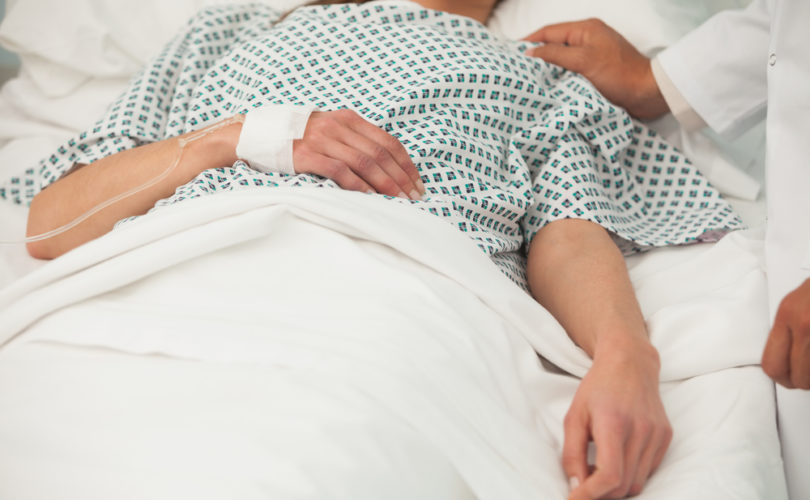 Following closely on the heels of a statement by Ireland's health minister that the nation’s constitutional amendment guaranteeing an equal right to life to both a mother and an unborn child is “too restrictive” with regard to abortion, a tragic case has come to light that will test the worth of the pro-life amendment.

A woman in her 20s was pronounced “brain dead” after suffering a brain trauma due to a blood clot, but is being kept on life support at Midlands Regional Hospital in Mullingar because she is 17 weeks pregnant, according to The Independent.

The 8th amendment to the Irish Constitution mandates that everything possible must be done to save the pre-born child, who has an equal right to life. The child is reportedly alive, but well below the gestational age where he could survive outside the womb.

The Independent says that the woman's parents have requested that their daughter be taken off life support, which the hospital cannot legally do without a court order.

“The legal advice would be there is one life here and it is the unborn child. Everything practicable has to be done – and that’s both under the constitution and the legislation passed last year. There is also a high possibility the unborn child will not survive,” a hospital spokesman said.

Judge Nicholas Kearns of the Irish High Court was reportedly made aware of the parents' request in a petition delivered to him on December 15. Justice Kearns has agreed to hear the case and deliver a ruling on December 23. In the meantime he ordered that the woman's identity remain undisclosed.

The Life Institute, which recently slammed the statements by Ireland’s health minister, Leo Varadkar, as “talking out of the two sides of his mouth on abortion,” said while the woman's situation was difficult for everyone involved, the life of the unborn child must be considered.

“Details only seem to be emerging but in this pregnancy, as with every pregnancy, there are two people involved and it seems that the medical staff here are trying to do their best in a very difficult situation,” Life Institute's Niamh Uí Bhriain told The Journal.ie.

“No one would like to see the baby’s life deliberately ended, after the tragedy with the mother,” Uí Bhriain said.

Meanwhile, The Independent reported that Minister Varadkar knew about the woman's case when he made his statement that the 8th amendment was “too restrictive” on abortion in that “while it protects the right to life of the mother, it has no regard for her long-term health,” raising conjecture that the medical dilemma he was aware of supported his agenda.

However, Prime Minister Enda Kenny distanced himself from the health minister's statement, saying he had not seen the speech beforehand, and that Varadkar was speaking in a “personal capacity.”

Kenny said that his government has encountered a number of “complex and sensitive” elements of the abortion debate that have proven “very difficult for people in my own party here.”

“That legislation is relatively new,” Kenny said, and, without referring specifically to the case of this woman, added, “I know that it has to be regularly assessed and monitored carefully. There are always, always unforeseen kinds of circumstances and kinds of cases that arise.”

“I do think it's important to have an understanding of the difficulties people go through here,” he said.

Uí Bhriain agreed that cases such as this demand debate on the implications of the abortion law, but pointed out that most people would agree it is a “human response” to want to save the life of the unborn child.

“I do think there needs to be a discussion around this. The legal position isn’t clear but from a human point of view it’s a terrible situation. I think if there is a chance to save the baby you have to take that,” she told the Irish Times.