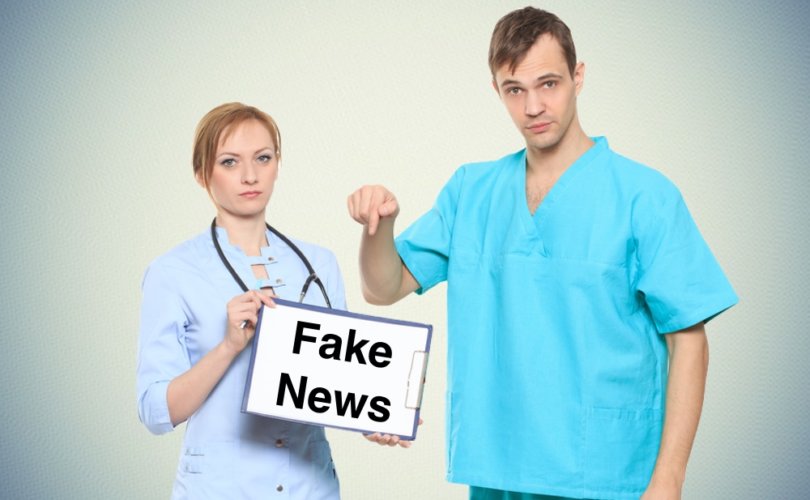 DUBLIN, Ireland, February 13, 2018 (LifeSiteNews) – An Irish newspaper was forced to retract an article after it admitted that it had published a fake poll about abortion, misleading its readers into believing a majority of Irish doctors support the abortion of pre-born babies in the first trimester.

The Irish Examiner splashed the headline “75% of doctors support 12-week access to abortion” over its front page on February 8. The sub-heading read: “Poll of 400 medics shows support for liberalising abortion regime”, and claimed that “three out of every four GPs and hospital consultants are in favour of allowing unrestricted access to abortion up to 12 weeks gestation.”

The newspaper stated that the poll was conducted by the Irish Medical Times, but no such poll existed.

The source of the Irish Examiner’s story was actually a survey conducted on Facebook and Twitter, which was open to all users.

Dr. Ruth Cullen, an Irish pro-life campaigner, stated that “For the Irish Examiner to claims the finders were ‘the most substantial survey of medics on the issue to date’ creates an entirely false impression. Anybody, not just medics, were able to vote in this poll. The only criteria for voting was a Facebook or Twitter account. The flippant use of such faulty methodology doesn’t auger well for the forthcoming referendum campaign.”

The referendum will decide whether or not to remove the Eighth Amendment from the Irish Constitution. The Amendment, added in 1983, protects the right-to-life of unborn children. The current Taoiseach, or Prime Minister, of Ireland, Leo Varadkar supports the introduction of abortion businesses to the Irish Republic.

John McGurk, the Communications Director of the pro-life “Save the 8th” campaign stated over Twitter that he had never seen “a more egregious example of fake news than the story about an alleged Irish Medical Times ‘poll’ being carried by @thejournal.ie and @irishexaminer this morning. They are reporting and actual twitter poll as scientific and reflective of doctors views.”

The false story was published also by the Irish Times and the Journal. Following a dramatic backlash on social media, both newspapers removed it from their websites. The editor of Journal.ie, Susan Daily, stated: “We misunderstood the methodology and have removed the article and all social [media] relating to it.”

“The era of fake news arrived in Ireland today as two of the country’s largest media organisations were forced to withdraw an entirely false story about the attitudes of Irish doctors,” commented Save the 8th in a report about the event.

“This has been a collective failure by the media. While we welcome the fact that the Journal and the Irish Times have corrected their error, the fact remains that a large number of Irish people will have read something entirely untrue in their morning newspaper, and may make decisions based on that,” the report continued.

“It is entirely unacceptable. Unfortunately the Irish media has taken a consistent pro-repeal line, and have been campaigning harder than anyone on that side of the debate. When zealotry replaces objectivity, the Irish people are the victims. We hope that the right lessons will be learned from this as the campaign progresses,” the report added.