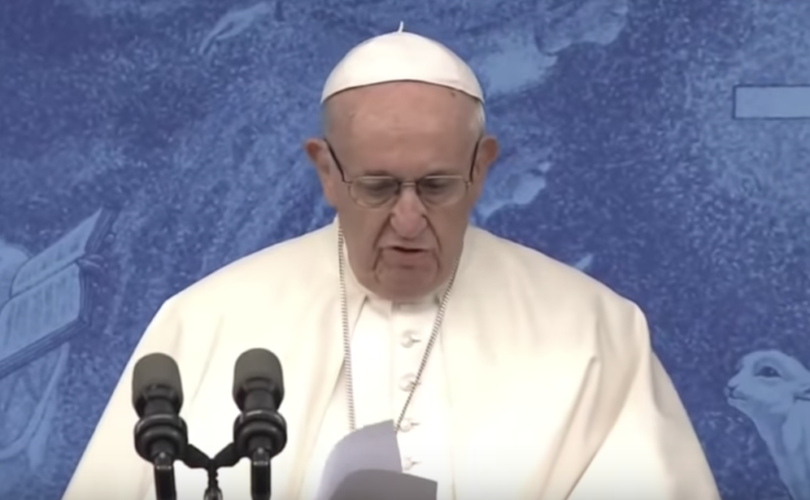 Pope Francis had just landed in Ireland, as a show of support for the controversial “World Meeting of Families” (WMOF). A Vatican conference, the WMOF was lauded by the secular press of Ireland and the UK for its “progressive” push for the normalization of homosexuality, featuring controversial speakers like Cardinal Blase Cupich, Cardinal Oscar Rodriguez Maradiaga, and Fr. James Martin, S.J.

As pilgrims arrived for the Sunday prayers at Knock, however, no one – not even some of the members of the secular press we spoke to – had heard of Archbishop Viganò’s report.

I was personally there in Knock to cover the arrival of Pope Francis – as was Stefanie Nicholas (of OnePeterFive.com) and my assistant, Catalina Ramos. As we arrived to the sequestered media center, we expected the place to be packed with press, buzzing about the scandal and preparing to try and engage the Pope from the risers. After all, the secular press of Ireland has a reputation for anti-Catholicism, and this news was easy meat to satisfy. What we found, however, was quite the contrary.

The media center was subdued, and mostly populated by Irish press – we were surprised to find ourselves the only Americans covering the Papal visit to the shrine, especially in light of all that had occurred. We set up our station, and began our work, during which I recorded a preemptive opening segment for an upcoming video report on the World Meeting of Families, featuring the Pope’s visit to Knock.

In this opening, I mentioned the breaking news on the Viganò testimony. That was where it got interesting.

A female reporter (later identified as Eileen Dunn of RTÉ) was sitting nearby as I was taping, getting her makeup done. She overheard me, and after I began reviewing the recording, she spoke with my assistant, Catalina. “Oh, I hear you talking about the news that came out this morning – we can’t report on this.”

By that time, I had joined the conversation, and asked Catalina what she said. Ms. Dunn, herself, replied with the same astonishing statement: “We were told we can’t report on that story – only on the events taking place, here.”

We walked away, shocked.

Ireland’s press embargo would mean no one in Ireland would know Viganò’s testimony as the Pope began his speech in Knock. None of the people in the audience would know of the massive scandal involving the Pope they came to celebrate, because members of the Irish press purposely withheld this information. The Irish Press had decided for the Irish people that the knowledge of this scandal could wait for the sake of optics.

Such actions raise the questions:

Later that evening as we returned to Dublin, we found that, still, very few of the the mainstream media had reported on the scandal. When we inquired with locals, we found them utterly unaware of it, and their shock quickly became anger.

By the time we arrived at the Dublin airport on Monday morning, media had begun to hint, deep within their articles, that all was not well in the Vatican. But nearly 48 hours after the news broke, their headlines still painted a narrative of near-adoration. It was very clear to those of us reporting for our U.S.-based outlets that the Irish press purposely censored the Viganò revelations. We will continue to investigate.

(Editor's note: An earlier version of this story misidentified the RTE reporter as Mary Kennedy rather than Eilieen Dunn. We regret any inconvenience this may have caused.)