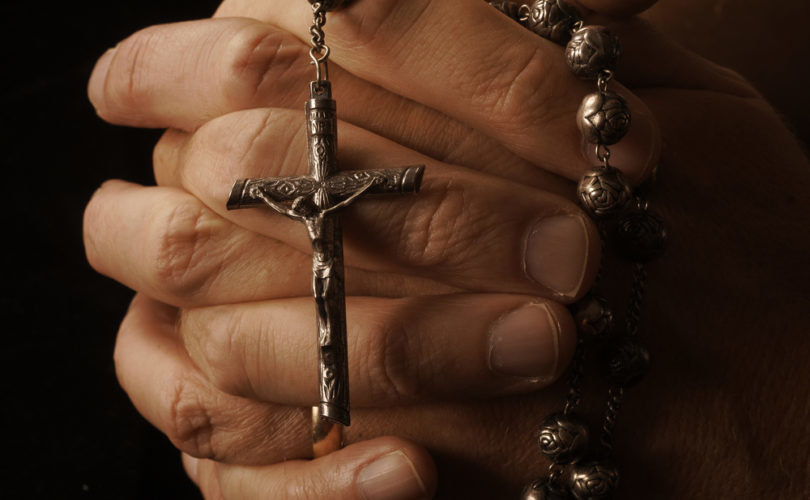 BELFAST, Northern Ireland (LifeSiteNews) – A men’s public rosary that started in Northern Ireland has now spread south to the Republic as Catholics there take on the responsibility of making public reparation for abortion.

Led by Patrick McCrystal of Human Life International, approximately 150 men attended the latest rosary in Northern Ireland on December 4 in Belfast, while another group met at the same time at the Marian Shrine of Knock in the Republic of Ireland’s County Mayo, also to make reparation.

Irish Catholic men organized a Rosary rally in Belfast on Saturday, December 4. Next month’s Rosary rally will take place in the city of Armagh.#SWNews pic.twitter.com/vyGrCQIrrX

Having already organized rosaries in Derry and Newry, McCrystal told LifeSiteNews that an increasing number of towns and cities are now setting dates to start the Five First Saturday devotions requested by Our Lady at Fatima.

“It feels like the last 20 years were preparation for what happened in Belfast last Saturday,” McCrystal said enthusiastically. “It’s spreading now to Athlone, Cork, Leitrim, Knock, Dublin, Limerick, Galway, and Letterkenny, with dates all being arranged for those cities and towns.”

Explaining the rationale behind the public rosary of reparation, the County Tyrone native told the men in Belfast how powerful St. Louis de Montfort considered public prayer to be, and that 2 Chronicles 7:14 demonstrates the importance of reparation.

“St. Louis de Montfort told us that public prayer is more powerful than private prayer, and Scripture tells us that if we repent, God will heal our land,” McCrystal said in the busy Belfast city center.

“Who here wants Ireland healed? Hands up!” he asked the crowd.

“Well, you couldn’t be in a better place, lads, because Scripture says… ’if my people…who are called by my name, will humble themselves and pray and seek my Face and turn from their wicked ways, then I will hear from heaven, I will forgive their sins, and heal their land.’”

Irish Men’s Rosary at Knock Shrine this past weekend. pic.twitter.com/9zwq18kb6P

The men also pondered some of the specific sins affecting society that require such repentance, not least abortion, while McCrystal also pointed to draconian COVID restrictions imposed by governments as signs of “growing tyranny”.

“Today we’re here to repent to the Lord for all the ways our nation has turned away from the Gospel and from the authentic teachings of the Catholic Church, and repenting for abortion, and contraception, and all forms of impurity,” McCrystal explained.

“And in His Mercy, we’re asking for an end to the COVID circumstances, for an end to the signs of the growing tyranny that’s very evident, coming upon us, and for the conversion of our nation back to God,” he added.

“And Our Lady promised at Fatima, (for) everyone who does the First Five Saturdays (devotion) … she will give you the graces necessary for salvation – all those who receive the Eucharist, go to Confession, pray the Rosary and meditate for fifteen minutes on the five decades (mysteries) of the rosary.”

The men’s public rosary was started in Ireland after McCrystal and his friend Owen Gallagher were inspired by the example of men in Poland on the Feast Day of St. Joseph this year.

Catholic men in Poland on their knees while praying the Holy Rosary led by a priest.

“The men’s public rosary of reparation and repentance was inspired by seeing a photo of hundreds of Polish men on their knees in rosary and repentance,” McCrystal previously told LifeSiteNews. “We put it out on social media and the response was tremendous.”

“We had 80 men show up praying on their knees! Many passersby joined us,” McCrystal continued.

“We would like to see it spread across all Ireland, then across the world. The initiative reached Lebanon, the Philippines, the Spanish-speaking world, and the Arabic-speaking world.”