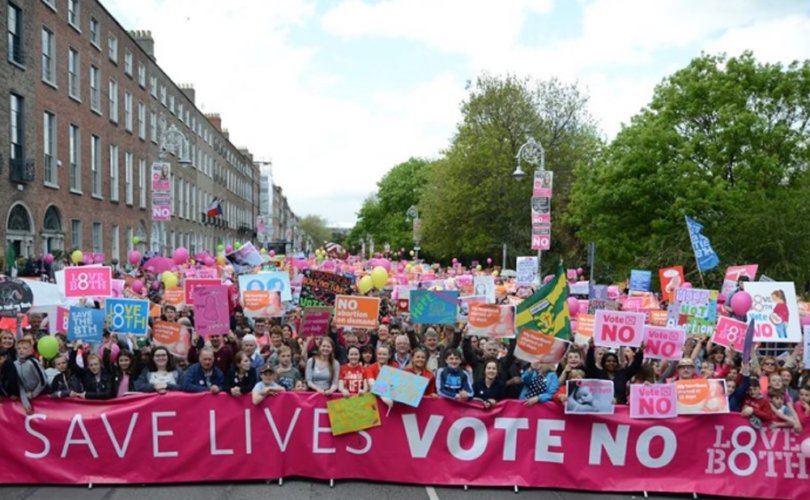 CADAMSTOWN, Ireland, May 21, 2018 (LifeSiteNews) – An Irish politician suspended by her own party for her pro-life stance is giving her side of the story in a new op-ed, just days before the country votes on whether to repeal its 8th Amendment protecting preborn humans' right to life.

Carol Nolan is a Teachta Dála (member of parliament) with the left-wing Sinn Féin party, which declared in February that there would be disciplinary action for any member who voted contrary to the party’s official support for repealing the amendment on March 25, and enacting abortion legalization legislation soon afterward. Ireland’s other major political parties will allow their members to decide the question for themselves.

Nolan voted against holding the referendum anyway, becoming the only one of the party’s 23 TDs to do so. In response, Sinn Féin Leader Mary Lou McDonald declared that the party’s elected representatives were expected to “vote in line with party policy,” and suspended her for her defiance.

“It is what it is. It’s a suspension, there was a clash between my conscience and their policy and that’s how it ended up,” Nolan said simply in April.

In an Irish Examiner column published Monday, Nolan explained that her conscience compelled her to break ranks with her party, revealed that she hasn’t yet “made any decision regarding my future in the Sinn Féin party,” and urged her fellow Irish citizens to vote against repeal.

“Friday’s referendum is about life and death,” Nolan declared. “It is about choosing whether to allow the most vulnerable, the unborn, to continue to have a right to life or to deny them this basic, fundamental human right, upon which all others are built.”

She argued that the 8th Amendment “has served this State very well” since its adoption in 1983, crediting it with saving as many as 100,000 lives. Ireland currently boasts one of the lowest maternal mortality rates in the world.

If it’s repealed, however, Nolan fears that abortion “would be normalised and liberalised, as it has been in England, where one in five pregnancies ends in abortion.”

Pro-lifers have predicted that the “mental health” exceptions in the government’s proposal are vaguely defined enough to authorize many late-term abortions. They are also concerned that liberalizing abortion laws will make Ireland the latest in a long string of countries where the vast majority of babies with disabilities such as Down syndrome are eliminated in the womb.

She rejected as “deceptive and dehumanising” any claim that abortion constitutes healthcare, noting that it “deliberately ends an unborn baby’s life and often causes emotional trauma for the mother.”

The Friday vote is expected to be close, but pro-life activists have been heartened by a steady decline in repeal support over the last several polls, which they attribute largely to a growing awareness that the government’s post-repeal plans are more extreme than initially advertised.

“As a republican with strong pro-life views, I feel that we, as a society, have no right to decide who lives or dies, as equality is for all,” Nolan declared. “We have no right to extinguish the right to life of the unborn baby. I would urge people to vote ‘no’ to the extreme proposal in the referendum on May 25.”