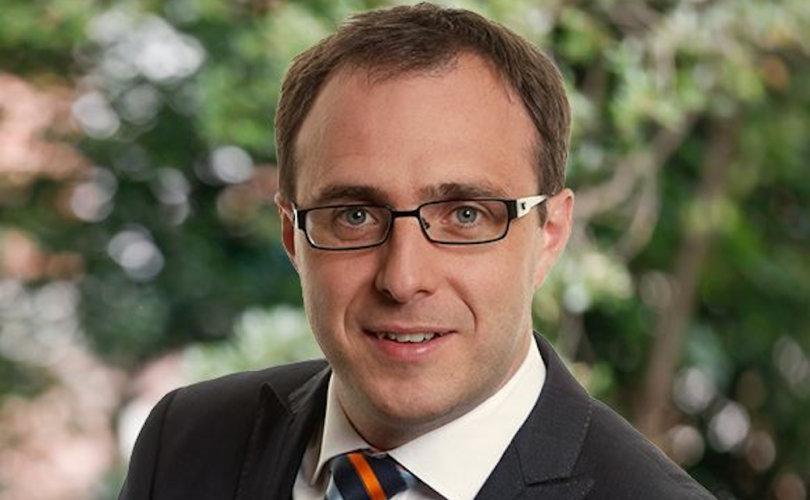 January 28, 2019 (LifeSiteNews) — Irish politician and Fianna Fáil member Robert Troy was refused Holy Communion at a Requiem Mass earlier this month because he admitted he voted in favor of the repeal of the Eighth Amendment to the Irish Constitution, paving the way for legalized abortion.

According to a report by the Sunday Times, Father John Hogan, parish priest of the Catholic parish of St. Nicholas, Multyfarnham in County Westheath withheld the Host from Troy at a funeral Mass on January 4th.

On January 1st, elective abortion became legal in Ireland during the first 12 weeks of pregnancy, and even later in cases where the pregnant woman's life or health is considered to be at risk, or in the cases of a fatal fetal abnormality.

Neither Father Hogan nor Troy has commented on the incident. Sources say Bishop Thomas Deenihan of the Diocese of Meath, where the incident took place, spoke to the priest about the matter, but nothing is known of that conversation.

Troy is a self-affirmed Catholic and the 12th child of a traditionally-minded Irish family. He was until recently known as a pro-life politician. In 2013, as a member of the conservative Fianna Fáil party that offered a free vote to its members on the issue, he voted against the landmark bill that would allow for abortion and Ireland in very limited circumstances.

Since then, Troy – a prominent frontbench member of the lower house of the Oireachtas, the Irish Parliament – has wavered on the subject. At Fianna Fáil’s Childcare Plan launch in February 2016, he was still saying the issue of removing laws in order to liberalize access to abortion even further was “not a priority for the party.”

But one month earlier, in January 2016, the Longford/Westmeath deputy who was at that point the party’s spokesman on children said he was in favor of “terminations” – the British and Irish euphemism for abortion – in cases of fatal fetal abnormality. Troy explained that he believed couples in these situations should be allowed access to abortion services, but only after a second medical opinion on the health of the unborn child had been obtained.

Nevertheless, that same year, Troy was still saying he was “pro-life” and believed “he should have the right to be.”

In January 2018, at which point the constitutional referendum on the removal of the Eighth Amendment that equally protected the pregnant woman and the unborn child was on the table, Troy – by then Transport spokesman – was even more confused – and confusing:

“There needs to be a referendum. In some cases, I’m supportive of it (abortion), such as fatal fetal abnormality. I still want to see what comes out of the Dáil debate. But I have reservations about allowing it up to 12 weeks. But I would support it in some circumstances,” he said.

When the debate was on in the Oireachtas, in March 2018, Troy claimed he was battling with his conscience over the referendum vote: “I have to say I'm very conflicted in relation to my own personal views. When I go to vote at the referendum, as it currently stands, I still have grave reservations in relation to 12 weeks. But I will pledge here tonight I will abide by the choice and the decision of the Irish people.”

At that point, it had become clear that a repeal vote would clear the way for wide access to elective abortion that would become freely available under a future law during the first 12 weeks of pregnancy.

While Troy gave no indication of his personal vote at the May referendum, according to the Oireachtas record, Troy on November 29th voted against an amendment prohibiting abortions on grounds of race, sex or disability in the regulation of Termination of Pregnancy Bill. That amendment would have saved at least some unborn children from death in their mother’s womb. It was defeated.

It should have come as no surprise, then, that Troy admitted in a wide-ranging interview with Hot Press on December 18th that he voted to repeal the Eighth Amendment:

“I have to say, I thought long and hard about it. In terms of repealing the Eighth, I would have no issue in terms of fatal fetal abnormalities, incest and rape. Other areas I’m uncomfortable with it. But when it came down to it, I asked myself the question: ‘By voting no, would it prevent one termination?’ And I then I said, ‘No, because what it does is, it victimizes women and it forces them to go abroad.’ While I had concerns about the 12-week nature, I ultimately came down with the decision to vote Yes.”

In the same interview, Troy recalled that he “campaigned in the same-sex marriage with the LGBT community in Mullingar and Athlone.” He added, “My brother is a year married; he got married to his (male) partner in Spain. I suppose that would’ve influenced my decision. I had no problem with it. I believe in equality for all our citizens. I would’ve been campaigning many an evening with the local community at a time when Avril Power was claiming she was the only liberal voice in Fianna Fáil on the matter.”

Now driving after having a glass too much is surely a bad thing, but killing unborn babies is in a different category altogether. The Catholic Church’s teaching is particularly clear on politicians’ responsibility regarding this question.

No later than in his New Year’s homily this year – three days before Father Hogan reportedly withheld Holy Communion from Troy, Bishop Kevin Doran of the Diocese of Elphin, Ireland, criticized Catholic politicians who had campaigned for the repeal of the Eighth Amendment for political reasons or “for their own personal advancement,” adding that they should repent for promoting “the taking of innocent human life.”

He said such politicians had “chosen a position which is clearly out of communion with the Church.” “There is no point in pretending otherwise,” he added.

He is the same Bishop who in May said Catholics who voted “Yes” should “consider coming to confession.” At that time, he said receiving communion would be “a matter for their personal conscience.” But in regard to politicians, his stance appears to be firmer.

A law favoring abortion or making easy access to it goes beyond the personal sin of abortion, creating a framework where the deliberate killing of unborn children is permitted, encouraged and even, in many countries, subsidized by the state.

In a note to (then) Cardinal Theodore McCarrick in June 2004 on “Worthiness to Receive Holy Communion,” Cardinal Joseph Ratzinger, who was then prefect of the Congregation for the Doctrine of the Faith, recalled that “it is never licit to cooperate formally in evil.” “There may be a legitimate diversity of opinion even among Catholics about waging war and applying the death penalty, but not however with regard to abortion and euthanasia,” he clarified.

“Regarding the grave sin of abortion or euthanasia, when a person's formal cooperation becomes manifest (understood, in the case of a Catholic politician, as his consistently campaigning and voting for permissive abortion and euthanasia laws), his Pastor should meet with him, instructing him about the Church’s teaching, informing him that he is not to present himself for Holy Communion until he brings to an end the objective situation of sin, and warning him that he will otherwise be denied the Eucharist,” he added.

“When ‘these precautionary measures have not had their effect or in which they were not possible,’ and the person in question, with obstinate persistence, still presents himself to receive the Holy Eucharist, ‘the minister of Holy Communion must refuse to distribute it’ (cf. Pontifical Council for Legislative Texts Declaration ‘Holy Communion and Divorced, Civilly Remarried Catholics’ (2000), nos. 3-4). This decision, properly speaking, is not a sanction or a penalty. Nor is the minister of Holy Communion passing judgment on the person's subjective guilt, but rather is reacting to the person's public unworthiness to receive Holy Communion due to an objective situation of sin.”

Father Hogan is now in the middle of a media (and social media) storm because of his reported decision to follow those clear guidelines.

On December 1st, 2018, he tweeted: “Looking over list of TDs [members of the lower house] who voted to reject amendments to the wicked abortion bill, I see the name of one who, only a few years ago, stood in my house & swore he was pro-life. The desire for power & popularity lead so many to do the most horrendous things. A salutary lesson.”