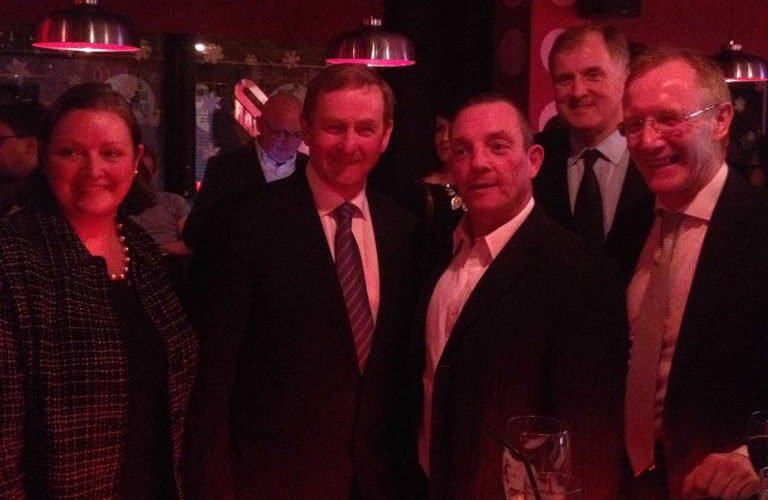 The homosexual cause has advanced so far in the once-Catholic Republic of Ireland that the country’s taoioseach or prime minister, Enda Kenny, is evidently comfortable posing for pictures with other party officials at a celebrated Dublin homosexual club.

The “Panti Bar” is owned by Rory O’Neill, himself a celebrity who performs in drag under the name Panti Bliss. While O’Neill/Panti was absent, the “LGBT” caucus within the ruling Fine Gael party was there for Christmas drinks and so was its founder and Fine Gael notable Jerry Buttimer, along with Education Minister James Reilly.

Buttimer, who arranged Kenny’s stopover from a previous event, appeared anxious to clarify that the taoiseach, though he was at the party, was not actually partying. He was, reported one columnist, “recognising their work on the gender recognition bill, the family relationship legislation and the gay marriage referendum.”

And while Kenny has not officially declared his support for the upcoming same-sex marriage referendum, his presence was seen as one more indication of which way he will swing when the referendum occurs.

Gloomily acknowledging that the Panti Bar appearance is as good a sign as any of Ireland’s march of folly away from traditional institutions and values was Patrick Buckley, head of the European Life Network. “The Irish Government is in lock step with Europe in deconstructing the family by implementing so called human rights policies that either ignore the family or are in direct opposition to it,” Buckley said.

Buckley told LifeSiteNews that Kenny’s government appears intent on undermining the traditional family, though the Irish constitution recognizes it “as the natural primary and fundamental unit group of society…and indispensable to the welfare of Irish Nation and the State.”

Last year the Fine Gael government liberalized the country’s abortion law, noted Buckley, while next year it plans a same-sex marriage referendum and is working on legislation allowing ummarried couples, including homosexuals, to adopt children.

Kenny apparently need not fear any backlash from the once-powerful Catholic Church. In the midst of liberalizing the abortion laws, he attended a Mass and received Communion in full view of the Bishop of Dromore, John Macareavey. Indeed, reported the Catholic Voice, he “was given VIP status,” receiving Communion without having to leave his pew, though as the Voice noted, he had “automatically excommunicated himself.”

Some laity still speak up. Buckley noted that while the government clearly believes homosexuality to be normal and healthy, “from a moral point of view the introduction of same-sex marriage stands in direct contradiction to the Sixth Commandment and the words of Our Lord Jesus Christ on the indissolubility of marriage.” Moreover, homosexuality’s unhealthiness was evident in the disproportion of male homosexuals with HIV-AIDS.

One of these, as it happens, is Rory O’Neill/Panti Bliss. O’Neill is a well-known drag performer who won his 10 seconds of real fame earlier this year when he appeared on the state broadcaster’s Saturday Night Show, talked about his homosexuality, his contracting HIV-AIDS, and the struggle to overcome “homophobia.” He accused several conservative Catholics and their organization, the Iona Institute, of homophobia. Coincidentally, one of Iona’s employees, Tom O’Gorman, was murdered in his home early the next morning.

O’Gorman had not been named by O’Neill but several he did name threatened to sue, so the network, RTE, took the video of that night’s show off their website until they had deleted the offensive passage. They then justified the deletion thus: “Last weekend’s The Saturday Night Show was removed from the Player due to potential legal issues and for reasons of sensitivity following the death of Tom O’Gorman as would be standard practice in such situations.”

Panti Bliss tweeted, “So my appearance on the Saturday Night Show has been taken off the RTE Player because someone I mentioned during the interview is upset. Legally upset.”