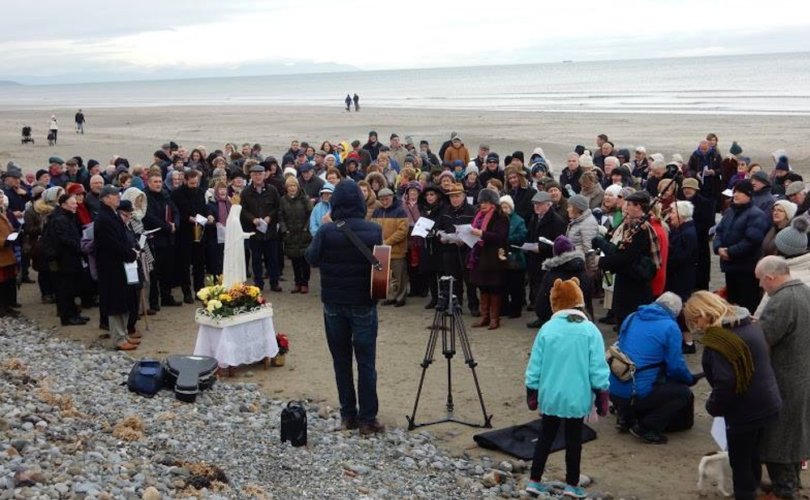 Pro-life advocates gather on the Irish coast to pray for life in November 2017.Credit: Rosary on the Coast for Life and Faith / Facebook

CORK, Ireland, May 31, 2018 (LifeSiteNews) — The pro-life group that rallied 30,000 people to pray the Rosary on the coasts of Ireland in the fall is now organizing a public penance in the wake of the abortion referendum.

“Forty Days of Reparation for Life and Faith” will give Irish Catholics the opportunity to “come before God and ask for His mercy and forgiveness” in response to last week’s right-to-life catastrophe.

But Rosary on the Coast organizer Kathy Sinnott told LifeSiteNews that the national will to abolish the right to life of the unborn child wasn’t as strong as has been reported.

“I was devastated not just by the loss of protection for the baby before birth but by the size of the vote,” Sinnott told LifeSiteNews. “[But] as the litany of irregularities in the voting process mounts up, I no longer am so sure that the election figures are real and the gap as big as it appears.”

Heartened by this suspicion, she is now organizing a spiritual battle against Ireland’s new culture of death.

“My focus now is countering our pro-abortion politicians who for the next 40 days will be in the Oireachtas/Parliament debating and passing abortion legislation,” she said.  “We will counter them with 40 Days of Reparation for Life and Faith.”

The “40 Days” began on May 30 and will continue until July 6.  A full schedule of devotions and activities can be found here.

Sinnott explained that unrepented sin and attachment to sin is a major block to God’s grace, and also cited the 2010 letter of Pope Benedict XVI to the Irish stating that penance, contrition and reparation were means of healing Ireland’s Church and people.

In a press release, “Rosary for Life and Faith” explained that reparation is the act of making amends for wrongdoing.

“To understand it, think of ourselves,” the group advised. “If we have fallen out of grace with God, we have to go to confession with a contrite heart so that we can make our peace with God, so that He can again begin to flood our hearts with His grace, and we can receive that grace.”

As with the individual, so with an entire country.

“We as a people have to come before God and ask for His mercy and forgiveness,” the group continued, “so He can shower us with His grace and we can receive it. When we fail to do this, there is a blockage.  This is one of the problems currently in Ireland.”

The Irish Republic, once a bastion of Catholicism, has experienced rapid change in the forty years following its rapturous reception of Saint John Paul II, the first pope to visit the Emerald Isle. In his letter to the Irish, Benedict XVI acknowledged “new and serious challenges to the faith” including  the clerical child abuse scandals that rocked the nation.

“Fast-paced social change has occurred, often adversely affecting people’s traditional adherence to Catholic teaching and values,” he wrote.  “All too often, the sacramental and devotional practices that sustain faith and enable it to grow, such as frequent confession, daily prayer and annual retreats, were neglected.”

“Significant too was the tendency during this period, also on the part of priests and religious, to adopt ways of thinking and assessing secular realities without sufficient reference to the Gospel,” the pontiff continued.

“The programme of renewal proposed by the Second Vatican Council was sometimes misinterpreted and indeed, in the light of the profound social changes that were taking place, it was far from easy to know how best to implement it. In particular, there was a well-intentioned but misguided tendency to avoid penal approaches to canonically irregular situations. It is in this overall context that we must try to understand the disturbing problem of child sexual abuse, which has contributed in no small measure to the weakening of faith and the loss of respect for the Church and her teachings,” Benedict stated.