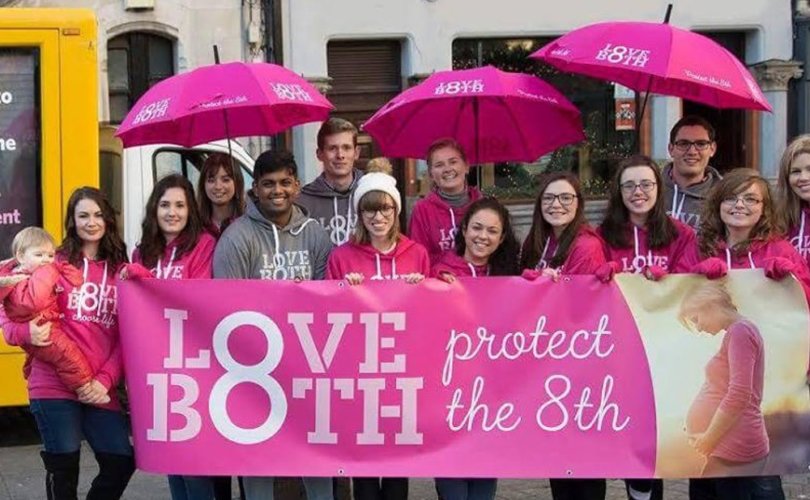 IRELAND, May 18, 2018 (LifeSiteNews) — Support for repealing Ireland’s Eighth Amendment continues to decline with a week to go before a national referendum on abortion, according to a new poll.

Although the poll suggest that the pro-abortion side currently enjoys more support, Irish pro-lifers say the numbers represent a steady trend in their favor that will ultimately save the day on May 25. Three weeks ago, the same poll showed that 47 percent favored repeal and 28 percent opposed it.

“The results confirm what we all expected: the gap between the Yes and No sides is closing,” Irish Times reporter Pat Leahy wrote in response to the news. While he still predicted a victory for repeal, Leahy said the poll shows that it “is no foregone conclusion.”

Campaigners to preserve the Eighth Amendment took that previous poll as a decline in abortion support as well, which they attribute to increasing awareness that repeal would legalize far more abortions than advertised.

If they win, pro-abortion lawmakers plan to introduce legislation legalizing first-trimester abortions with a 72-hour waiting period, and only permitting later abortions for risks to a mother’s life or health or fatal fetal abnormalities. But pro-lifers warn that the proposal contains significant loopholes in the name of “mental health,” including that it may open Ireland to prenatal extermination of children with Down syndrome.

Highlighting these and other facts, pro-lifers say, is the key to overcoming pro-repeal forces’ media, activist, and celebrity support, as well as the blow pro-life internet communications took last week when Google decided to ban all advertising related to the referendum on its platforms.

“People look more to the fact, and appreciate, that if the Eighth is rejected all unborn babies would be at risk of abortion,” LoveBoth spokeswoman Caroline Simons explained.

This week, the LoveBoth campaign launched an advertisement featuring Conor O’Dowd, a man with Down syndrome urging Ireland to “not repeal us.” Pro-lifers have also been engaged in intensive grassroots efforts to spread the facts in person, which they say is cutting through the misinformation and converting former repeal voters.

“My friends who were considering voting yes have been shocked to see that there are no protections for people with disabilities at all in the proposed legislation. … I tell them it's ok to vote no” Al Byrne #LoveBothVoteNo pic.twitter.com/ARZ6RX5Y9j

But while pro-lifers remain hopeful that Ireland will continue to protect the preborn after next week, they’re also keeping in mind the stakes of defeat.

“Essentially what we're talking about here is removing the most fundamental right to life for all and handing a blank cheque over to our politicians to legislate how they see fit for abortion,” LoveBoth’s Síle Quinlan told the BBC. “And more than likely if we vote Yes on May 25th, we, the Irish people, will never again be asked for our view on the issue.”