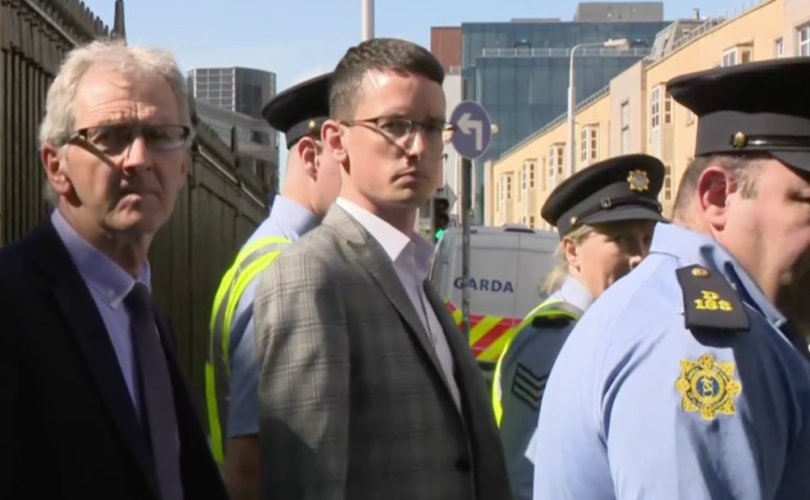 Enoch Burke being led away by police, September 5, 2022.Video screenshot

(LifeSiteNews) – A teacher in Ireland has been jailed as part of the fallout for refusing to address a student by a transgender pronouns.

Enoch Burke, a Christian and a teacher at Wilson’s Hospital secondary school in Multyfarnham, Co Westmeath – which is a Church of Ireland school – was arrested on September 5 for contempt of court, in a case which has emerged from his refusal to call “a boy a girl” in the classroom.

RTE News reported that Burke was sentenced to Mountjoy Prison after breaking an injunction issued against him and will remain in prison for an unspecified period of time.

Burke is at the center of a disciplinary process which was begun against him after he refused to address a male student – reportedly in the process of “transitioning” – as a girl, and also refused to use the pronoun “they.”

Burke reportedly refused to comply with the school principal’s May 9 order to use the new name and pronoun and was consequently placed on paid, administrative leave August 22 while the school board held a disciplinary process.

— Article continues below Petition —
Free Enoch Burke, the teacher jailed after not using teen's "they" pronoun
Show Petition Text
17724 have signed the petition.
Let's get to 20000!
Thank you for signing this petition!
Add your signature:
Show Petition Text

Upon Burke’s continued attendance at the school, he was then handed an interim order on August 30, wrote the Irish Times, to prevent him from entering the school.

Burke, who teaches German, history, and politics, had told the court that he refused “to call a boy a girl” as it was “manifestly wrong” and against his conscience. He continued to attend the school despite the injunction.

The school board was determined to remove Burke from the school and consequently sought the intervention of law enforcement after his rejection of the August 30 order, claiming that he could be disruptive to the students.

The court permitted this in a hearing Friday. Burke was then arrested for contempt of court on Monday, while sitting in an empty classroom in the school and taken directly to the court for a hearing.

“My religious beliefs are not misconduct. They are not gross misconduct,” he told the court. “They never will be. They are dear to me. I will never deny them and never betray them, and I will never bow to an order that would require me to do so. It is just not possible for me to do that.”

He added that upholding the biological reality of male and female could not lead to a charge of gross misconduct, and such a charge was the only thing which could lead to a suspension.

“Transgenderism is against my Christian belief. It is contrary to the scriptures, contrary to the ethos of the Church of Ireland and of my school,” the teacher added. “I love my school, with its motto Res Non Verba, actions not words, but I am here today because I said I would not call a boy a girl.”

It is insanity that I will be led from this courtroom to a place of incarceration, but I will not give up my Christian beliefs.

He was sentenced to serve an unspecified jail term, to last until he purges his contempt or until further order of the court.

Many have expressed outrage at Burke’s arrest, with social media users suggesting his refusal to use transgender pronouns was the underlying cause of the arrest.

However, Judge Michael Quinn stated that he was sentencing Burke to prison based only on his contempt of court, not on his beliefs. But, with Burke sentenced to prison until he “purges his contempt” or the court orders otherwise, it is unclear when he might be released.

Please send letters of support to Enoch Burke, an evangelical Christian, given an INDEFINITE prison sentence by Irish Judge Michael Quinn for his Christian beliefs.

Send your letters and cards to:

Genspect, an international group promoting transgender ideology, were among many who expressed outrage at Burke’ sentencing to jail. Noting how the group did not agree with many of Burke’s “views,” Genspect wrote that “this is irrelevant.”

“We need to protect freedom of conscience and the right to free speech,” the group stated. “Although Enoch Burke is in jail for contempt of court,  this case is rooted in the fact that the teacher’s beliefs prevented him from calling a student they/them. As he said ‘it’s plural’. It’s the fruit of the poisonous tree.”

Burke is due to appear in court on Wednesday for a reviewal of the August 30 injunction placed upon him.