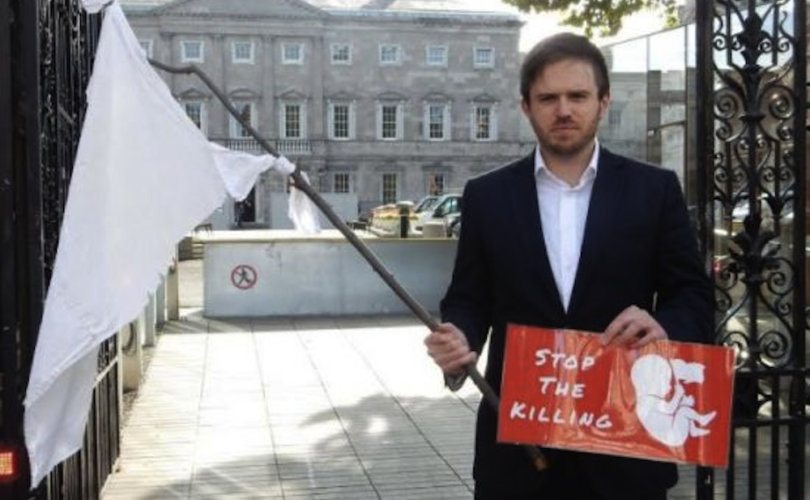 DUBLIN, Ireland, September 20, 2017 (LifeSiteNews) — A young Irish aid worker has begun a hunger strike in hopes of persuading the Irish prime minister (or Taoiseach) to watch a video about abortion.

Tim Jackson, 28, of Donegal ran as an independent in Ireland’s last general election and has done aid work in Syria, the Central African Republic and India. He began his fast on September 18 outside the gates of the Irish parliament (or Dáil) building in Dublin. He intends to drink water and not to fast until death.

Jackson has written to Taoiseach Leo Varadkar and the Parliamentary (or Oireachtas) Committee on Abortion asking them to watch this video about abortion procedures. His letter is as follows:

“I am very disappointed that your government seems intent on having a referendum to decide which human beings can be legally killed in the womb. I am therefore calling on An Taoiseach and the Oireachtas Committee on Abortion to first watch a video of how children are killed in the womb, before any discussion of whether we should vote on their lives.

“Such a vote would be the single worst policy-decision ever made by an Irish government, turning ballot papers into death permits. Democratic votes do not extend to robbing humans of fundamental rights. We would never consider legalising such evils as rape, and neither should we consider further legalising the murder of human beings in the womb.

“If An Taoiseach and the committee refuse to view an abortion before proceeding further with deliberations, I can only assume you wish to be willfully ignorant of the barbarity of the procedure and what Irish children will suffer. If you do not reply within three days agreeing to this reasonable request, I will take proportionate, peaceful action to rectify the situation.

“I’m doing well, I have to say,” Jackson told LifeSiteNews. “It’s been two days now. I‘m not suffering much. It’s better than I expected, and they say the first few days are the hardest.”

Jackson said he hadn’t yet heard from the Taoiseach or the Committee. “I don’t expect, quite honestly, that they’re going to speak to me,” he admitted. “But hopefully [my hunger strike] will change opinions.”

Jackson has already been the subject of five or six interviews, and many people have clicked on the video that Jackson hopes the Irish legislators will watch.

“My fast is about offering a strong witness about life and death,” Jackson told LifeSiteNews. “Abortion should not be part of a civil society.

Currently, the lives of unborn children are protected by the Irish constitution. The proposed referendum could overturn the Eighth Amendment to the constitution, which was approved by referendum in 1983. Abortion was already illegal in Ireland, but pro-life campaigners feared the laws would be struck down by judges. The Eighth Amendment, which constitutionally protects unborn Irish babies, passed with 66.9 percent of the vote.

Jackson told LifeSiteNews that there is quite a significant difference between his generation and that of his parents. “It’s because we lost the faith and the morals,” he said. “The media has had a huge influence, and it has a greater influence in Ireland now than it ever has in history. The transformation has happened quite quickly, and we haven’t known how to stop it.”

The changes haven’t necessarily come from within Ireland, either. Jackson says money has been pumped into the country from abroad. He named American George Soros as one of the agents of Irish social change.