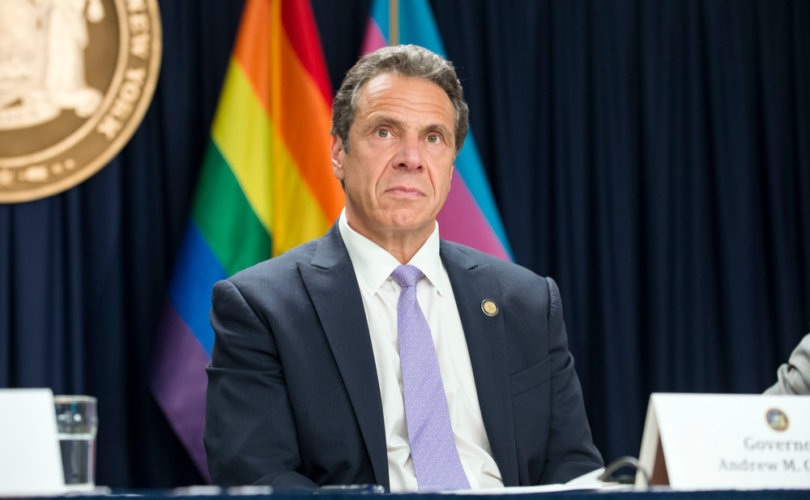 NEW YORK, November 27, 2020 (LifeSiteNews) – In the wake of the Supreme Court ruling against New York Governor Cuomo’s capacity limits in places of worship, President Trump has welcomed the decision, whilst Cuomo termed it “irrelevant” and a mere “statement.”

In a 5-4 ruling late on Wednesday, the Supreme Court blocked Cuomo’s extreme limits of places of worship, stating that “the regulations cannot be viewed as neutral because they single out houses of worship for especially harsh treatment.”

The regulations had forced churches and synagogues to have as few as 10 people inside, no matter the size of the building, whilst “essential businesses” were allowed to operate as normal, with no limit on the capacity.

Commenting on this apparent hypocritical treatment, whereby “it may be unsafe to go to church, but it is always fine to pick up another bottle of wine,” Justice Gorsuch stated in the ruling, “Who knew public health would so perfectly align with secular convenience?”

In Wednesday’s ruling, the Supreme Court wrote, “Even in a pandemic, the Constitution cannot be put away and forgotten. The restrictions at issue here, by effectively barring many from attending religious services, strike at the very heart of the First Amendment’s guarantee of religious liberty.”

Cuomo continued: “It’s irrelevant of any practical impact because of the zone they were talking about is moot. It expired last week. It doesn’t have any practical effect.”

Speaking to the New York Times, Cuomo took aim at the conservative members of the court: “You have a different court, and I think that was the statement that the court was making. We know who he appointed to the court. We know their ideology.”

However, President Trump shared news of the victory, by a tweet with the words, “HAPPY THANKSGIVING!”

House Republican Leader, Kevin McCarthy, also welcomed the news, saying “Power-hungry Democrats like Cuomo have used the pandemic as an excuse to target people of faith with radical restrictions. It has no basis in science, and the Supreme Court agrees. This is a win for religious liberty, and a reason to be thankful today!”

Brooklyn and Staten Island Congresswoman Nicole Malliotakis, said “Last night’s Supreme Court decision is a victory for religious institutions, their congregations and all freedom-loving Americans. Governor Cuomo’s arbitrary restrictions not only infringed on our First Amendment rights but did not take into account building capacity or safety protocols put in place.”

“It is fitting that the Court’s decision was made on the eve of Thanksgiving, a holiday founded by Pilgrims who settled in North America in search of religious freedom. New Yorkers & all Americans have one more thing to be thankful for today.”