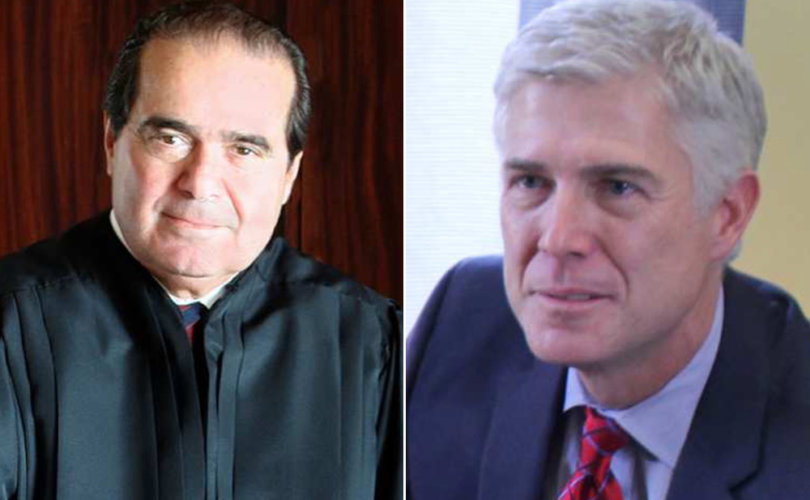 March 3, 2017 (LifeSiteNews) – Is The New York Times signaling that Supreme Court nominee Judge Neil Gorsuch is pro-homosexual, in the same way that it reported that then-Education Secretary nominee Betsy DeVos was a friend of “LGBT rights”?

Conservatives and same-sex/transgender activists are debating the significance of a Feb. 11 article by veteran Times reporter Sheryl Gay Stolberg. It reports that in his personal relationships with homosexual friends and co-workers, Judge Gorsuch has been very approving of homosexual relationships.

The Gorsuch confirmation hearings are scheduled to begin Monday, March 20.

LifeSiteNews reporter Matthew Hoffman, in his in-depth report on Gorsuch’s judicial philosophy, his private moral views, his church, and his interactions with homosexuals, describes a man who differs in some big ways with the jurist whom he could replace and to whom he is most often compared: the late Antonin Scalia.

“Gorsuch’s liberal Episcopal affiliations and his ambiguous views on some social issues have resonance with those who find him uncomfortably similar to David Souter, a vaguely conservative Republican and Episcopalian whose views on social issues were largely unknown when he was appointed to the Supreme Court by George H. W. Bush in 1999,” Hoffman writes. “Souter went on to side with the Supreme Court’s liberal wing in crucial decisions upholding Roe v. Wade and striking down Texas’s anti-sodomy law.”

Hoffman reports that Gorsuch’s record is “likely strong” on right to life, “ambiguous, but likely weak” on homosexual agenda issues such as “non-discrimination” laws, and “strong” on religious freedom. “With regard to religious liberty, Gorsuch has taken very strong interpretations of constitutional protections,” he reports.

The Times on Gorsuch and Gays

The New York Times reported how Gorsuch reacted when his close friend and former Harvard classmate Phil Berg told him that he had a “boyfriend.”

“He [Gorsuch] didn't skip a beat,” Berg said, saying that the conversation led to a “special bond” between he and Gorsuch. “It was a huge deal for me, and it made a lasting impression.”

Similarly, the Harvard Crimson reports that Gorsuch offered Harvard classmate Berg “unwavering support” when Berg “came out” to him as homosexual.

“Neil was among the first ones that I told, and his reaction was instant and without skipping a beat and just gave me a sense ever since then of absolute respect for the relationship,” Berg said. “[He] did not treat me any different than he did the moment before I said that or different from any of the other friends.”

Along the same lines, Joshua Goodbaum, a former clerk to Gorsuch, told the Times that his boss was “thrilled” for him and his “husband” when they got same-sex-“married” in 2014:

“He was actually kind of syrupy about it. I remember him saying, ‘You’re going to see how wonderful this is for your relationship,’’’ Goodbaum said.

The Times also reported that prominent “gay Republican” Ken Mehlman—the former chairman of the Republican National Committee who “outed” himself in 2010–is circulating a letter of support for Gorsuch. Mehlman is pro-homosexual-“marriage” and is crusading for the GOP to abandon its pro-family platform opposing rights based on homosexuality and transgenderism.

“Let’s not forget that we were told similar things about John Roberts when George W. Bush nominated him to the Supreme Court in 2005. The New York Times at the time reported how he’d done pro bono work for gay groups in the historic Romer v. Evans case before the Supreme Court in 1996 ― the first case in which Justice Kennedy, writing the majority decision, gave LGBT people a victory,” Signorile writes in the liberal Huffington Post. “We were told Roberts had a lesbian cousin … But none of that stopped Roberts from writing a full-throated dissent in the Obergefell case.”

Signorile, like many LGBT activists, loathes Scalia for his robust, conservative dissents against liberal, pro-homosexual SCOTUS rulings, particularly the 2003 Lawrence v. Texas decision throwing out Texas’ anti-sodomy law. So his bottom line is: “It’s not ‘everybody’ else who has Gorsuch pegged as being like Scalia ― it’s Gorsuch who has willingly, unequivocally pegged himself that way.”

Attorney Andy Schlafly, son of the late pro-family icon Phyllis Schlafly, is not convinced about Gorsuch’s reported judicial originalism. He has been the most outspoken conservative critic of Trump’s Supreme Court choice, telling LifeSiteNews that Judge Gorsuch “is like a liberal Republican” who is “going to be another Anthony Kennedy.”

Justice Kennedy, appointed by Ronald Reagan, is as much derided by social conservatives as he is revered by “gay” activists—for inventing a legal “right” to homosexuality-based “marriage” in his 2015 Obergefell v. Hodges decision, and for his prior pro-LGBT SCOTUS rulings. He has been pilloried on the Right for claiming that opposition to “gay rights” is based on “animus” against homosexuals rather than moral disagreement with unnatural homosexual behavior. Schlafly also compared Gorsuch negatively to Justice Souter.

Asked about Gorsuch’s reported encouragement and affirmation of homosexual relationships as reported by the Times and other media, Schlafly said that most social conservative would not celebrate “gay” relationships in such a way. Rather, “they would try to steer their friends away” from that lifestyle, or encourage them to be celibate so as not to violate historic Judeo-Christian admonitions against sexual sin, he said.

Schlafly worries that the same Gorsuch who respects judicial precedent will be very reluctant to overturn Obergefell—particularly given his reported “gay”-affirming sensibilities. Many conservative opponents of the homosexual and “transgender” agenda share Schlafly’s apprehensions, based on conversations with this reporter.

Ditto on abortion, Schlafly says. He points to this portion of an article in Politico last month to show that Gorsuch cannot be trusted to reverse Roe v. Wade:

When he met with Sen. Susan Collins (R-Maine) earlier this month, she pressed him on his views on judicial precedent: If five current justices disagree with a previous Supreme Court decision, is that sufficient grounds to overturn the ruling? Gorsuch said no.

Brian Camenker, a leading opponent of the LGBTQ agenda as president of Mass Resistance, said the New York Times article shows that, “Clearly, Gorsuch personally supports the homosexual agenda and other left-wing positions. But he also has a record of clear-headed judicial rulings which ignore that.”

“Will it continue when he gets on the Supreme Court? The whole thing is pretty unnerving,” Camenker told LifeSiteNews.

Virginia conservative attorney Bill Olson has his own unique take on Gorsuch: “My view of Neil Gorsuch is colored by the fact I was friends with his mother Anne during the Reagan Administration. [Anne Gorsuch was the first woman Administrator of the EPA (Environmental Protection Agency) under Reagan.] Anne was highly principled and totally trustworthy.  No one can know how a lawyer will rule once on the bench, but he comes from great stock.”

Pro-family attorney and author Scott Lively of Defend the Family International chose to focus his criticism on the New York Times itself rather than Gorsuch.

“I don’t trust the New York Times on anything, especially LGBT issues,” Lively told LifeSiteNews. “If they really thought he was pro-‘gay,’ they’d spike it until it was too late for conservatives to do anything about it.

“So my guess is that the Times is trying to sabotage Gorsuch,” Lively said.

In recent decades, the New York Times has become a blatant advocate for homosexuality and transgenderism in both its “news” and opinion pages. Articles like Stolberg’s routinely cover LGBTQ issues from the perspective of homosexual activists, leaving out critics.

The Times is hardly alone in this regard: most major media cover homosexuality and now transgenderism as a “civil rights” cause for which there is no legitimate opposition. The religious liberty of people to oppose homosexual “marriage” is covered, but journalists routinely cast pro-freedom-of-conscience legislation and actions as “anti-LGBT.”

The one-sided, pro-LGBTQ “news” coverage has been encouraged for decades by leftist, pro-homosexual, pro-transgender organizations, led by GLAAD. The powerful media-pressure group castigates opponents of homosexuality as hateful bigots and pushes media to use its favored terminology, e.g., not using the word “homosexual,” which it calls “offensive.”

Neil Gorsuch: The new Scalia…or something else?

Antonin Scalia’s most consequential views on life and family