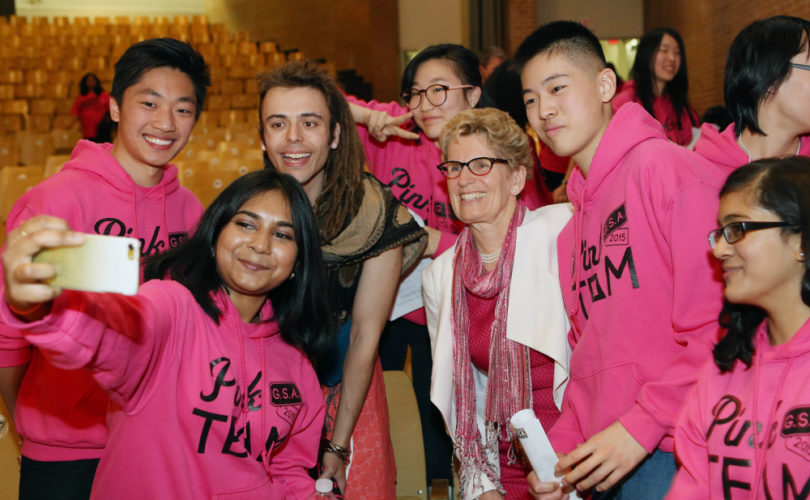 OTTAWA, April 27, 2015 (LifeSiteNews.com) — The pro-gay organization that organizes the Day of Pink in schools across Canada every April appears to have altered an essential historical fact about how the day originally began 8 years ago, with a direct consequence for its use of the day to promote the homosexual agenda.

Jer’s Vision, now known as the Canadian Centre for Gender & Sexual Diversity (CCGSD), states in their brochures and posters that the original victim of bullying was a “gay student” (see here and here).

However, LifeSiteNews has found that the bullied student was, and remains, a heterosexual male who was bullied simply for wearing pink.

The organization highlights this “gay student” to promote its message of ending “homophobic” bullying.

“The International Day of Pink was started in Nova Scotia when 2 straight high school students saw a gay student wearing a pink shirt being bullied,” the CCGSD states. “The 2 students intervened, but wanted to do more to prevent homophobic and transphobic bullying. They decided to purchase pink shirts. The next day they got everyone at school to arrive wearing pink, standing in solidarity against bullying and discrimination. The result was that an entire school took a stand and began working together to prevent homophobic and transphobic bullying.”

LifeSiteNews asked Travis Price, one of the two students who stood up for the bullied student, on Twitter if the student was insulted for identifying as ‘gay.’

Price responded that the student was “just insulted” for wearing pink.

Price’s answers are backed by media coverage of the event at the time. A CBC report states nothing about the bullied student identifying as gay, but only that bullies “harassed the boy, called him a homosexual for wearing pink and threatened to beat him up.”

Dias maintained that the student was “gay,” responding: “The student who was being bullied, we were informed by the student 7 years ago, and the teacher, that he identified as bisexual.”

After presenting Dias with Price’s statements and media reports from that time, LifeSiteNews asked if he still stood by his statements. He replied, “Yes.”

The CCGSD’s interpretation of the event is fast becoming the predominant one, and is used by government-run organizations across the country, including police forces such as Hamilton Police, has come out in support of the Day of Pink.

Day of Pink posters state that the boy's name is “Charles McNeill.” Price told LifeSiteNews, however, that this information is false. According to the 2007 CBC report, the bullied boy has “never been identified.”

While the CCGSD appears on the surface to be an organization devoted to ending bullying, a quick look through its website reveals that its only focus is the promotion of homosexuality to young people by way of promoting ‘safe and inclusive’ school environments. The organization works exclusively to eliminate what it calls “homophobia” and “transphobia” in schools, but not bullying over other issues such as economic status, body size, or intelligence. The CCGSD’s latest initiative to promote homosexuality includes making a sweater exclusively from hair of people who identify as ‘gay’ and calling it the “world’s first and only gay object.”

Critics say that the homosexual movement has a well-known track record of changing historical facts to gain the public’s sympathy for their agenda. Some have referred to this as the “gay grievance industry.” One of the most glaring examples is the 1998 murder of Matthew Shepard, who it turns out was murdered over drugs and money, not because he identified as gay and was the victim of a hate crime. LifeSiteNews has compiled a list of outright lies perpetrated by homosexuals to bring public sympathy to their cause.

Lou Iacobelli, former teacher and current chairman of the Parental Rights and Education Defense Fund, told LifeSiteNews that he was “not surprised” to see a pro-gay organization change historical facts to suit its agenda.

“The gay movement is acting to pervert and undermine the traditional family unit–the true building block of any good society. It’s also pushing to rewrite history to make it fit better with the homosexual narrative.”

One example of historical revisionism often practised by homosexual activists is to claim that certain historical figures were homosexual. This year on Good Friday, the day Christians commemorate the death of Jesus, one activist even claimed that Christ himself was homosexual. “It’s easy enough to find evidence to suggest Christ was gay, starting with the fact that he led a homosocial life, surrounded by men,” the activist wrote, concluding that there is “something sacred” about having “faith in a gay Christ.”

Iacobelli said there has been an agenda for years by the so-called sexperts such as Alfred Kinsey to redefine human sexuality, marriage, and natural sexual practices between a man and a woman. The purpose has too often been to justify same-sex behaviors that health studies have shown lead to increased rates of sickness, disease, and even death.

“It's all about homosexuals having greater societal control and power so they can legitimize their lifestyle. They speak of ‘diversity’ and ‘equality,’ but they want to force everyone to think as they do,” he said.