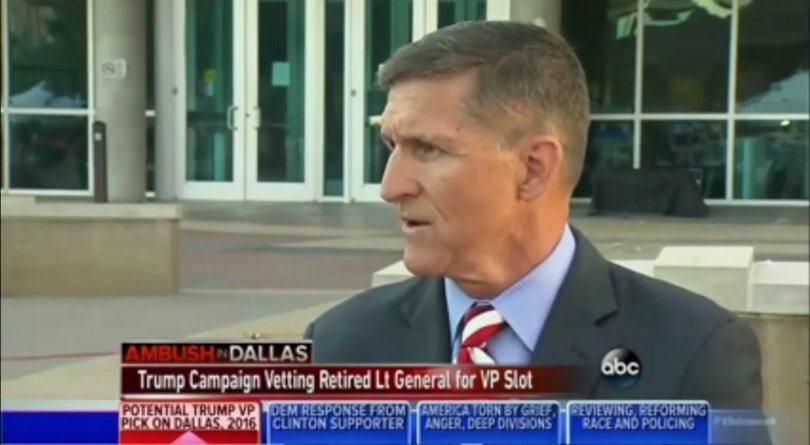 NBC News reported on Sunday that it had confirmed the Trump campaign is vetting Lt. Gen. Michael Flynn (ret.) for vice president.

Yesterday, he made remarks about abortion and same-sex “marriage” that social conservatives say have “disqualified” him from serving on the ticket.

On ABC's “This Week” program Sunday, he tried to brush off questions about social issues, saying, “I'm about national security.”

When cornered, he gave a slow and uncomfortable answer.

“These are difficult issues, but I think women have to be able to choose…sort of, the right of choice…but I think that's a difficult legal decision,” Flynn stammered. “They are the ones that have to make the decision, because they’re the ones that are going to decide to bring up that child or not.”

When asked about the right to same-sex “marriage,” Lt. Gen. Flynn responded, “What people do in their private lives, these are not big issues that our country’s dealing with that will cause our country to collapse.”

“I'm more concerned that our country could collapse, because we are not dealing with education issues, immigration issues,” he said.

Flynn is a dark horse entry into the veepstakes, as a registered Democrat from Rhode Island who served as President Barack Obama's director of the Defense Intelligence Agency (DIA) from 2012 until retiring in 2014.

“'Trump-Flynn.' I've heard [Donald Trump] say that,” an unnamed source outside the formal Trump campaign told The Washington Post. “I think it's a brand he finds appealing.”

“It seems that General Flynn might bring more to the table for the Hillary Clinton for President campaign than Donald Trump,” evangelical leader David Lane told LifeSiteNews.

Lane, a pivotal evangelical activist who works largely behind the scenes, has recruited hundreds of pastors to run for office this year through his American Renewal Project.

Marjorie Dannenfelser, president of the Susan B. Anthony List, agreed.

“General Flynn has disqualified himself from consideration as vice president,” she said. “His pro-abortion position is unacceptable and would undermine the pro-life policy commitments that Mr. Trump has made throughout the campaign.”

Two other pro-life candidates seemingly threw cold water on the possibility that they would be Trump's running mate, as well.

Oklahoma Governor Mary Fallin on Sunday said on CNN, “It’s certainly a great honor to be mentioned with numerous other people across our nation” as a possible vice presidential choice. “But I have not been asked to provide information.”

Last week Rep. Marsha Blackburn, R-TN, responded to a question about whether she had submitted papers for the vetting process by saying, as “a conservative from a red state, I am a very unlikely candidate.” Rep. Blackburn chairs the House Select Panel on Infant Lives.