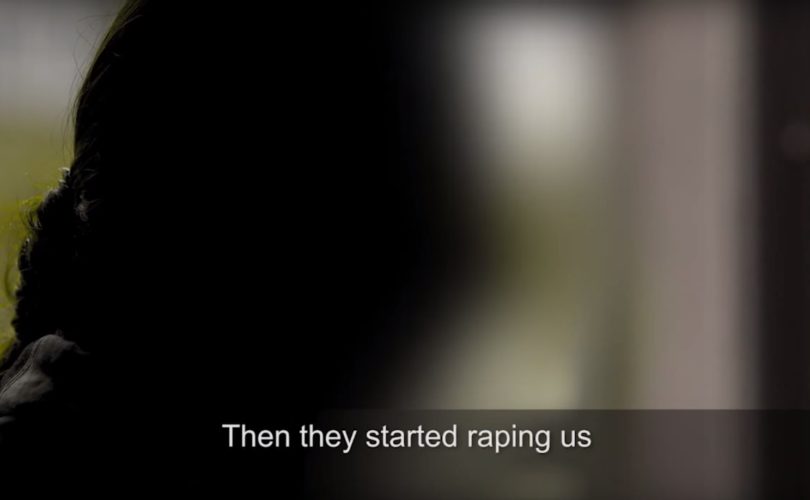 October 7, 2015 (LifeSiteNews) – ISIS fighters in Iraq forced captured Yazidi women to have abortions, then raped them, according to three such women who survived to tell what happened.

The young Yazidis were first forced to watch as their husbands, fathers and brothers were shot. Then they were themselves sold like cattle by warriors of the Islamic State of Iraq and Syria, and forced to abort their unborn children, finally surviving not only multiple rapes daily but, in some cases, their own suicide attempts to put an end to their suffering.

They told their stories in videotaped interviews made by the AMAR International Charity in London.

One woman, Munira, 16, remembered how her captors examined her “belly, teeth, breasts” before selling her to one of their number.

After being sold and raped repeatedly, another woman, Bushra, 21, saw a friend kill herself, and decided to do the same. But she was stopped by her owner and taken to the hospital where he said, “he was going to rape me that same day however ill I made myself.” He did so after tying her hand-and-foot. Later he raped her five or six times a day till she managed to escape.

Another woman, Noor, having failed at her first escape attempt, was locked by her “owner” in a hotel room with six other ISIS men for a punitive gang rape.

So systematic were the ISIS invaders about raping Yazidis they brought their own doctors to examine their captives and perform abortions on those who were pregnant so that they too could be raped.

“One of my friends was pregnant,” Bushra said. “Her child was about three months in the womb. They took her into another room. There were two doctors and they did the abortion,” leaving her friend bleeding and in such pain “she could not talk or walk.” After that they took all the pregnant women to a guarded house for their abortions and recovery.

The AMAR Foundation concluded each video by quoting Mohammed, the founder of Islam, enjoining merciful treatment of non-Muslims. “He who hurts a non-Muslim citizen of a non-Muslim state, I am his adversary and I shall be his adversary on the judgement day,” stated one of these.

But one expert, Robert Spencer, author of 14 books on Islam and founder of the Jihad Watch website, told LSN, that his research shows that rape and forced abortion “are in complete accord with Islamic teaching. Muslim men may have as many as four wives as well so-called ‘captives of the right hand’” or slaves.

Spencer added that Mohammed himself set the pattern when he took the wife of one of his slain, Jewish opponents after the battle of Khaybar “and had sex with her right on the battlefield.”

Islamic proponents dispute these accounts, however, claiming Islamic teaching recommends that Muslim men who cannot afford the dowry marry Muslim free women, should marry Muslim-believing slaves. These are the “captives of the right hand.” They also respond that Mohammed’s action after the Battle of Kaybar was aimed at protecting a captive woman of high social standing by taking her as another wife.

Spencer noted that the Nigerian Muslim terrorist group Boko Haram has recently practiced the same actions of capturing, raping and selling young women. “Taking non-Muslim women as sex slaves is all in accord with Islam,” he said.

The chaos reigning in Syria began, according to the annual report of the United States Commission on International Religious Freedom, in 2011, with peaceful protests by Sunni Muslims against Bashar al-Assad’s regime. The regime’s violent response let to armed resistance and a conflict that has spread into neighbouring countries.

Says ISCIRF’s 2015 report: “In support of the regime were U.S.-designated terrorist groups, such as Hezbollah and Shabiha. In opposition to the Assad regime, dozens of domestic and foreign groups, varying widely in goals, emerged. Some of these groups, including the U.S.-recognized National Coalition of Syrian Revolution & Opposition Forces (commonly known as the Syrian National Coalition (SNC)), espouse democratic reform. Others, such as ISIL, are motivated by religious ideologies espousing violence.”

But none is respectful of religious minorities. More than 50,000 Yazidis have fled their villages. According to AMAR, 5,000 Yazidi women remain enslaved to ISIS. Out of a population of 22 million, there are more than 3.3 million Syrian refugees living in camps in surrounding countries and another 6.5 million displaced persons within the country.

It is the refugees belonging to the Middle East’s religious minorities, according to Jason Kenney, Canada’s Minister of Defence and also Multicultural Affairs, who need most protection: Christians, Yazidis, Druze, who stay away from refugee camps because the majority Muslims would oppress them there as much as they used to do in their own villages, or more so.