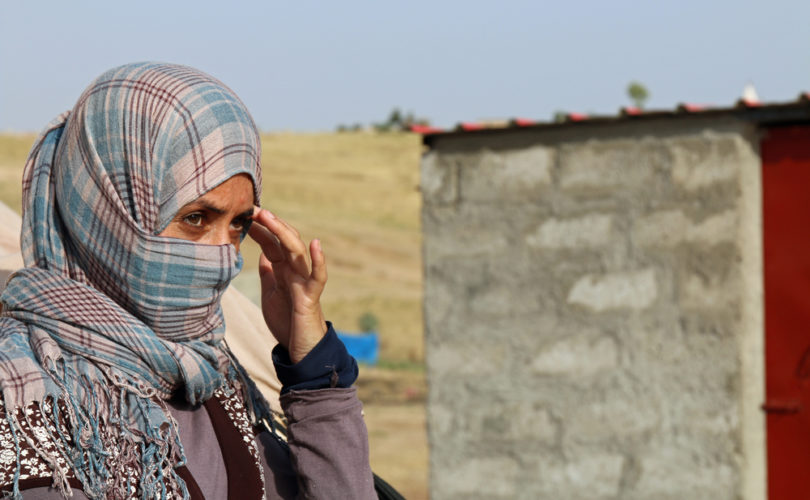 A Yazidi woman who escaped abuse from ISIS stands outside her tent in a Kurdistan refugee camp.Owen Holdaway / Shutterstock.com

March 18, 2016 (LifeSiteNews) – ISIS warriors and officials are forcing sex slaves to take birth control in order to maximize the times they can be raped under Islamic law, according to the New York Times.

The Times reported this week that “an obscure ruling in Islamic law,” forbidding sexual intercourse with pregnant women, is leading ISIS warlords to force contraceptive pills and injections on their female prisoners in order to increase the number of times they can rape them.

Escapees, many from about 5,000 women of the Yazidi people reportedly kept captive for sex by ISIS occupiers of parts of Iraq and Syria, have already reported being forced to undergo abortions for the same reason, while a related but unverified report held that ISIS was killing Down Syndrome children born to sex slaves, also to maximize access to the women and girls.

The Times interviewed three dozen Yazidi women in Middle Eastern refugee camps who “described  the numerous methods the fighters used to avoid pregnancy, including oral and injectable contraception, and sometimes both.” One reported undergoing a forced abortion as well.

The women told of being passed from owner to owner, with a negative pregnancy test often a condition for a successful sale. “They awaited their results with apprehension,” reports the Times. “A positive test would mean they were carrying their abuser’s child; a negative test would allow the Islamic State fighters to continue to rape them.”

When women and teenage girls were sold, the seller often displayed the bottle of birth control pills he had been feeding her to prove she was child-free. One girl told the Times that this did not impress her third owner. “He quizzed her on the date of her last menstrual cycle, and, unnerved by what he perceived as a delay, gave her a version of the so-called morning-after pill, causing her to start bleeding.”

The Times notes the contrast with the Balkan conflict at the end of the last century, where victors repeatedly raped captive women with the expressed intent of impregnating them.

While contraception is generally hailed by contemporary feminists as a key element in reproductive freedom, one pro-life leader has noted that its use here by ISIS reveals its true impact on women. “Isis is the most horrific example,” Monica Migliorino Miller, Director of Citizens for a Pro-Life Society, told LifeSiteNews, “of the way in which women can be and are exploited and abused by de-sexing them through the use of contraception for male amusement.”

Miller added that, “Contraception often leads to the exploitation of women, whose bodies rendered impotent may be put to the use of male pleasure, without love, commitment, responsibility or marriage. Even when women choose to use contraception, this is often the result.”

Miller’s views were reinforced by Simon Fraser University economist Douglas Allen, who told LifeSiteNews that widespread use of contraception had lowered the “shadow” price that women could ask in the dating and marital market. Whereas before the pill, women could demand from their sexual partner a commitment to marry, after its use became widespread, women had less leverage to extract vows of marriage in exchange for pre-marital relations. “None of my students under 30 has ever even heard of a shotgun wedding,” said Allen, in reference to a marriage forced on the couple by pregnancy—and the bride’s father carrying a notional firearm.

But in the Islamic State, as in the broad swathe of countries conquered by medieval Islam, it is the Muslim males who bear arms and who force their will on their female captives, with no marriage contemplated. At least in the Middle Ages, Miller told LifeSiteNews, “if such a slave became pregnant due to the repeated acts of rape, sex with the slave would have to cease.”  Now in the Islamic State, “We see an almost unheard of application of contraception–in which ISIS males ‘force-feed’ contraception to their slaves to ensure that they will never become pregnant–and thus enable them to abide by the Islamic law–already perverse to begin with!”

Robert Spencer of the Jihad Watch website told LifeSiteNews that rape of captives is “in complete accord with Islamic teaching. Muslim men may have as many as four wives as well as so-called ‘captives of the right hand’” or slaves.