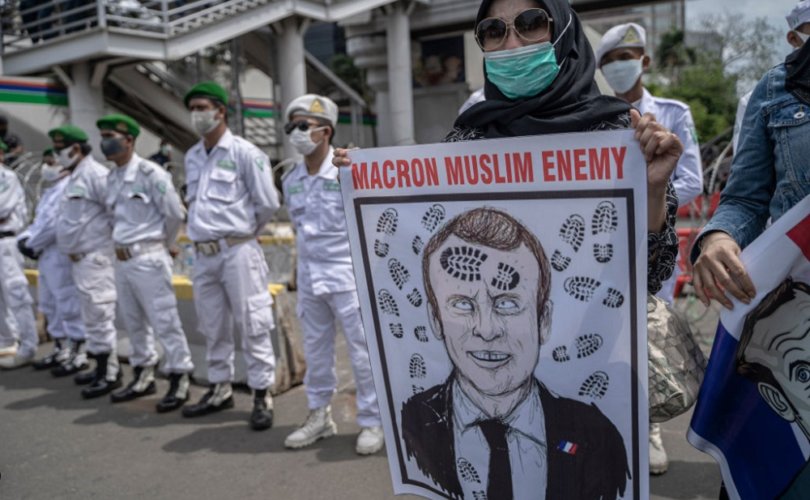 November 10, 2020 (Daily Signal) — There hass been a reprisal in the past month of a disturbing trend in Europe: Islamist terror attacks.

On Oct. 4, a migrant from Syria attacked two tourists in the German city of Dresden, killing one. He had arrived in 2015 and had recently finished a three-year juvenile sentence for assaulting a police officer and causing bodily harm.

On Oct. 16, French teacher Samuel Paty was beheaded in a terror attack in the Parisian suburb of Conflans-Sainte-Honorine. Paty was killed after he had shown cartoons of Muhammad published in Charlie Hebdo magazine to his class on free speech.

The terrorist responsible had been in contact with Islamist fighters in Syria and reportedly paid around $350 to two students to identify Paty.

On Oct. 29, three people were killed at the Notre Dame Basilica in Nice, France, by a 21-year-old Tunisian who illegally entered the European Union on Sept. 20 through the Italian island of Lampedusa, a favored landing site for migrants coming from North Africa.

After trying once before to reach Europe and not succeeding, he returned, and on his second attempt was transferred to the city of Bari on the Italian mainland where he was put into COVID-19 quarantine.

Tunisian authorities did not flag him as a threat and cited him for minor crimes. He was given an expulsion order on Oct. 9, but because he was not flagged as a terror threat, he was allowed to leave and traveled shortly thereafter to France.

More than 11,000 Tunisian migrants have arrived in Italy in 2020 alone, yet Italy has only successfully repatriated 1,186, via twice-weekly flights carrying 40 people. Many migrants arrive without documents and are from nations that refuse to take their citizens back or from which European nations either have no repatriation agreement or refuse to repatriate migrants because of humanitarian concerns.

Italian reception centers are overwhelmed with migrants whose home nations have flagged them as potential security threats and cannot hold others.

On Monday, a terror attack in Vienna killed four people and injured 22 before the 20-year-old attacker was shot dead by police.

The perpetrator had been imprisoned for trying to travel to Syria to fight with ISIS. An ethnic Albanian born in Austria, he was given early release last December, along with a subsidized apartment on account of good behavior and participation in a nonprofit-run deradicalization program. Karl Nehammer, Austria’s interior minister, stated that he had “deceived” his handlers.

Robin Simcox, director of the Counter Extremism Group in the U.K., last July wrote about the threat to Europe posed by frustrated travelers who could not travel to Syria and instead were planning attacks on the countries where they resided, warning, “Frustrated traveler plots have outlived the existence of the caliphate. In current form, there is a possibility there may even be a very small uptick in Europe.”

French Minister of the Interior Gerald Darmanin said in August the country had 8,132 people on its terrorism watch lists and that the threat “remains extremely high in the country.”

Following the terror attack in Vienna, Austrian Chancellor Sebastian Kurz called for a Europe-wide anti-terror pact targeting Islamism. Whether anything comes from it remains to be seen.

What’s for certain is that Europe remains in the crosshairs for Islamist terrorists, and the sheer scale of the problem has overwhelmed security services and made it likely this horrific recent trend will continue.