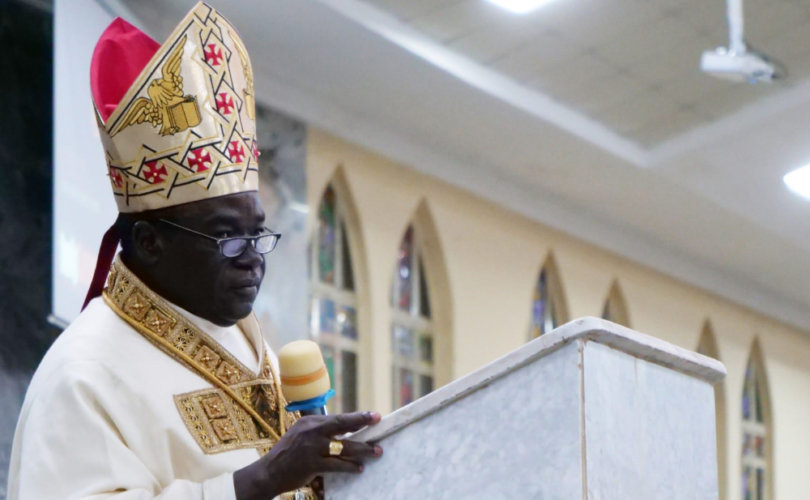 On May 11, Deborah Samuel, an economics major at Shehu Shagari College of Education in Sokoto, was accused by fellow students of posting a “blasphemous” statement about Mohammed in a WhatsApp group chat. She was subsequently dragged from the school building, beaten, and burned.

Video footage of the horrific murder allowed police to identify participants, who were immediately arrested. In response, Muslim youth in the capital attacked Holy Family Catholic Cathedral, another church, and a hospital.

The Diocese of Sokoto reported the following details of the incident:

During the protest, groups of youths led by some adults in the background attacked the Holy Family Catholic Cathedral at Bello Way, destroying church glass windows, those of the Bishop Lawton Secretariat and vandalized a community bus parked within the premises.

St. Kevin’s Catholic Church, Gidan Dere, Eastern By-pass, was also attacked and partly burnt; windows of the new hospital complex under construction, in the same premises, were shattered. They were promptly dispersed by a team of mobile policemen before they could do further damage. The hoodlums also attacked the Bakhita Centre located along Aliyu Jodi Road and burnt down a bus within the premises.

The city’s government declared a 24-hour curfew to stem the riots.

Bishop Matthew Hassan Kukah of the Sokoto Diocese called upon government authorities to bring those who murdered Deborah Samuel to justice. “The only obligation that is owed her immediate family, her fellow students, and the school authorities,” the Bishop declared, “is the assurance that those who are guilty of this inhuman act, no matter their motivation, are punished according to the extant laws of our land.”

Insisting on the criminal nature of the killing, the bishop said: “This has nothing to do with religion. Christians have lived peacefully with their Muslim neighbors here in Sokoto over the years. This matter must be treated as a criminal act and the law must take its cause.”

READ: The Western world is turning a blind eye to the Islamic attacks against Christians in Nigeria

The bishop also called upon the faithful to pray for the soul of Deborah Samuel, writing: “Meanwhile, I wish to call on all Christians in Sokoto and around to remain calm and to please pray for the repose of the soul of Ms. Deborah. It is the first obligation we owe her. May God grant her eternal rest and console her immediate family.”

The Pontifical Foundation, Aid to the Church in Need (ACN), said in a statement on the events that it is shocked by the “terrible murder,” underscoring the long train of violence that has increasingly destabilized Nigeria.

“ACN decries this most recent act of violence,” executive president Thomas Heine-Geldern said. “The levels of extremism and violence reached in Nigeria over the last few years are absolutely appalling. Hardly a week goes by without news of kidnappings and dozens of deaths, but this barbaric act leaves us speechless.”

“Since 1999, twelve states in northern Nigeria have adopted Shariah-based legal codes which operate in parallel with secular courts. Many of these Shariah laws include heavy penalties for blasphemy, including death,” noted ACN.

“However, at least Shariah guarantees a form of due process, without resorting to lynching and summary execution, as happened with this most recent case in Sokoto, which is not unprecedented.”