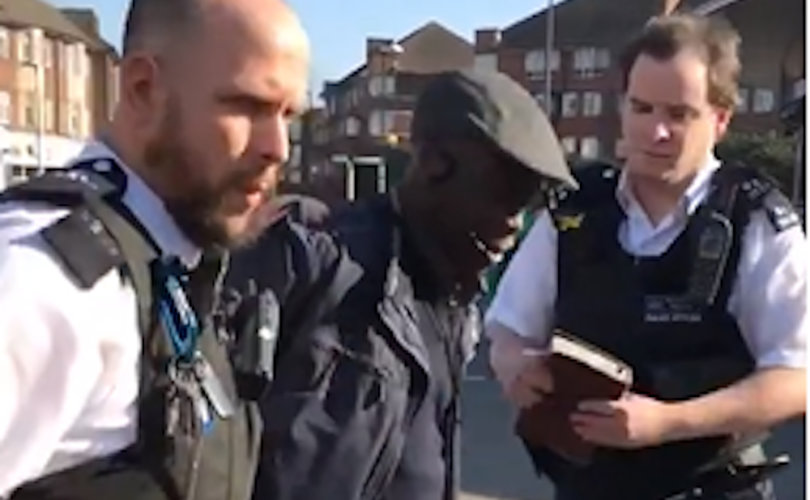 LONDON, February 25, 2019 (LifeSiteNews) — A viral video depicts a street preacher facing arrest in England for supposed “racism” as he shares the Gospel.

Now shared more than two million times, the video shows the exchange between the as-yet-unidentified preacher and two police officers. Beginning in mid-conversation, the preacher told the two officers, “I can be arrested if you want.” The preacher told an officer, “Give your life to the Lord, Jesus Christ.” When one of the officers asked him what he was doing, the preacher responded, “I am preaching.”

A Christian preacher this afternoon was arrested at Southgate station London N14 for preaching about Jesus . @CConcern the police told him it’s because public had said he was being islamophobic . We have the full video and wondered when preaching was now illegal ? @Campaign4T pic.twitter.com/ZxC1DhlZCf

“You don't want to listen to that? You will listen when you are dead,” the preacher says. It is then that the officers cuffed the preacher and seized his Bible. When the man asked the officers not to take his Bible, the other officer retorts, “You should have thought about that before being racist.”

While it is not clear what the man was preaching before the camera began to roll, the Twitter account that posted the video, Eye on Antisemitism, claimed that police told him he had been accused of Islamophobia. EyeonAntisemitism wrote that just before the incident unfolded, the preacher had been engaged in a debate with a Muslim man that became heated. According to the group, the Muslim man who debated the Christian preacher referred to the Bible as “s**t.”

Christian Concern, a group that advocates for Christian values and parents’ rights, tweeted Monday that it has contacted the preacher and has offered help. The group offers legal assistance to Christians whose rights have been infringed because of their faith.

Update: we have found out the name of this preacher and have been in contact to offer help. #StreetPreacher #Southgate

According to Premier news service, police were called to the Southgate subway station in south London on Saturday “in response to concerns raised about a man's behaviour.” While he was arrested to “prevent a breach of the peace,” a police statement said, he was then then de-arrested and no further action was necessary.

Rev. Dr. Gavin Ashenden of the Church of England, a former chaplain to Queen Elizabeth, expressed deep concern and support online for the street preacher. According to Premier, Rev. Ashenden said, “Perhaps the Archbishop of Canterbury and the House of Church of England bishops might like to protest in favour of the poor and marginalised street preacher at the hands of policemen who neither know nor apply the law?” Others wondered if the police would have handled a copy of the Koran in the same manner as officers handled the preacher’s Bible.

Emails from LifeSiteNews to Eye on Antisemitism and Christian Concern were not answered by deadline.

Obianuju (“Uju”) Ekeocha, a Nigerian pro-life advocate, said in a YouTube video that London police apparently arrested the Christian preacher on the basis of “hearsay.” She called on police to apologize for the arrest and to question the officers involved.

Is the @churchofengland #synod discussing the protection of free speech for preachers in our country?

No. They’re too busy with mindless waffling about over vacuous subjects like transphobia and climate change. ����‍♀️ https://t.co/kroAveBbID