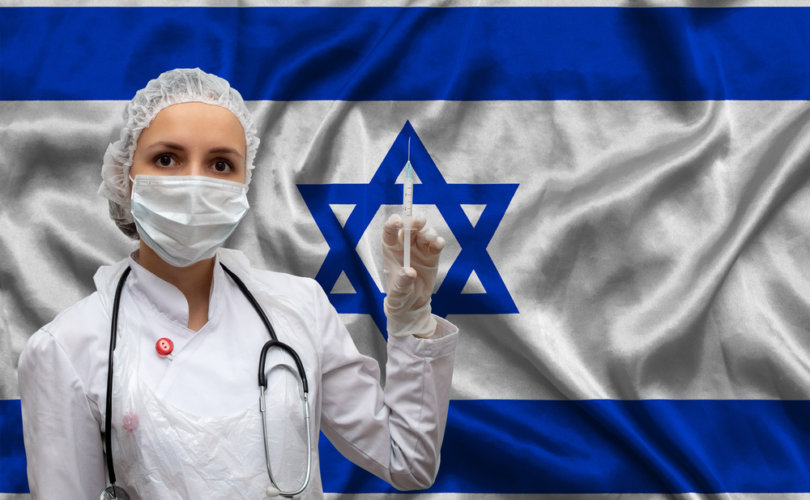 (LifeSiteNews) — Israeli researchers have concluded that the immunity provided by two doses of the Pfizer vaccine decreases rapidly only weeks following vaccination, and offered COVID booster shots as a solution.

A newly released study, which was conducted by Leumit Health Services in Israel and the U.S. National Institutes of Health (NIH), and published in the British Medical Journal (BMJ) earlier this month, presented evidence that the risk of contracting COVID-19 doubles only 90 days after receiving a second dose of the Pfizer shot, and keeps increasing as more time elapses.

“In [a] large population of adults tested for SARS-CoV-2 by RT-PCR after two doses of mRNA vaccine, a gradual increase in the risk of infection was seen for individuals who received their second vaccine dose after at least 90 days,” the study’s investigators concluded.

The findings were interpreted by the team as a possible explanation for the dramatic surge of COVID cases that Israel has been experiencing over the past few months.

“Since June 2021, … a resurgence of individuals with SARS-CoV-2 has been seen, which could be at least partially because of decreasing levels of anti-SARS-CoV-2 antibodies in vaccinated people,” the investigators said.

Israel was one of the first countries in the world to roll out a large-scale vaccination campaign and to impose a vaccine passport on its citizens. It also achieved one of the highest vaccination rates with more than 62% of its entire population having been fully vaccinated to date, and nearly 70% having received at least one dose, according to  Our World in Data.

In spite of this, the country recently logged one of the world’s highest infection rates in the world, with more than half of the total number of cases being among fully vaccinated people.

Despite this, the team still concluded that booster jabs are a good idea to counteract the waning immunity among vaccinated people.

“The results suggest that consideration of a third vaccine dose might be warranted,” the investigators said.

In August Israel saw 14 breakthrough COVID cases in people who had received their third dose within only week prior to testing positive. A biomedical scientist quoted in a report published at the time suggested that boosters were inefficient against the Delta variant.

“Do not think that the boosters are the solution,” he said.

This is not the first time that health authorities have called for booster shots, while admitting at the same time that even multiple doses of the experimental mRNA vaccines don’t seem to provide efficient and long-lasting protection against COVID-19.

Leading national and international health authorities have repeatedly assured the public that vaccines are the way out of of the coronavirus crisis.

In June of this year, the U.K. minister for COVID vaccine deployment, Nadhim Zahawi, said the coronavirus vaccines are “our way out of this pandemic,” echoing the words of U.K. Health Secretary Matthew Hancock who described them as “the dawn … lifting all of the gloom” in a televised interview.

And in November last year, Professor Sir John Bell of the Scientific Advisory Group for Emergencies (SAGE), which is advising the U.K. government in its coronavirus policy, said that life would go back to normal by spring of 2o21.

But he was quickly corrected by WHO special envoy professor David Nabarro who instead said that after a vaccine rollout, life would go back to “a new normal.”

Meanwhile, the European Commission has warned countries against unilaterally rolling out boosters for the experimental COVID shots saying that there is not enough information available about potential risks linked to giving patients a third dose.