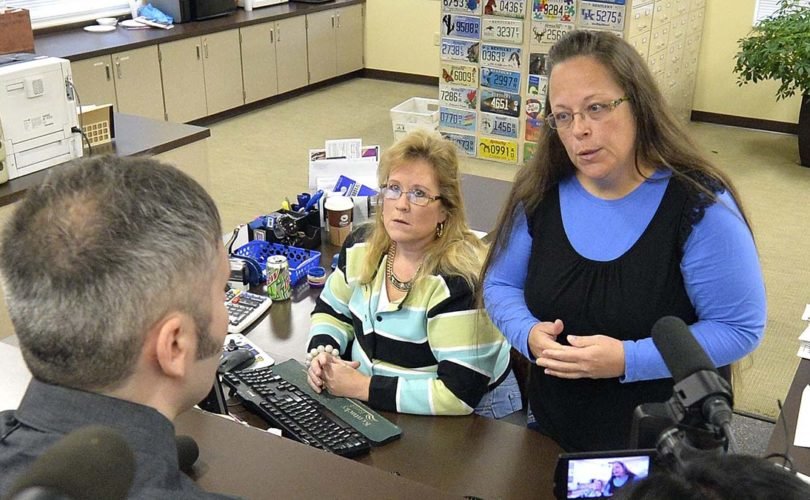 ROWAN COUNTY, KY, September 2, 2015 (LifeSiteNews) — Kim Davis, the embattled Christian county clerk, says that she has “no animosity toward anyone and harbor[s] no ill will” — but nor will she violate “marriage and God's Word.”

In a statement released by Liberty Counsel, Davis — who has appealed a lower court decision requiring her to give marriage licenses to gay couples —  said that to provide the licenses would be “to violate a central teaching of Scripture and of Jesus Himself regarding marriage.”

“To issue a marriage license which conflicts with God’s definition of marriage, with my name affixed to the certificate, would violate my conscience,” she said. “It is not a light issue for me. It is a Heaven or Hell decision. For me it is a decision of obedience. I have no animosity toward anyone and harbor no ill will.”

Two presidential candidates, Kentucky Gov. Steve Beshear, and the ACLU have said that Davis should hand out the licenses because she is a public employee, and her duty to the public supersedes her religious beliefs. However, she says, “To me this has never been a gay or lesbian issue. It is about marriage and God’s Word. It is a matter of religious liberty, which is protected under the First Amendment, the Kentucky Constitution, and in the Kentucky Religious Freedom Restoration Act [RFRA].”

“In the bill analysis that was available to all state legislatures, it says that a public employee needing accommodation was acceptable,” Gannam told LifeSiteNews. “Making the accommodation was required, if statutory conditions were met, even at a high cost or expense to the government.”

“There is no dispute to the sincerity of Kim Davis' belief that authorizing and affixing her name to a marriage license for a same-sex couple would violate her faith. She has also clearly faced a substantial burden on her religious exercise, given the lawsuits, threats, and the threat of a criminal case.”

“There are over 130 clerk offices in Kentucky, so the government's requirement to provide the least restrictive solution would easily allow Davis to keep her job. Nobody would go without a license, and she would keep her job. Even the current governor, who vetoed the RFRA law, has said the legislature could change the marriage licensing law” to accommodate Davis.

Gannam said that Davis' request for an exemption is not new. “People who don't want to be combatants, who don't want to work on Sundays, who oppose abortion” have all received exemptions in the past because of religious beliefs, he explained.

“The general proposition that working for the government means you have no rights is false. Before 15 years ago, no country in the world had a thing called same-sex marriage. Certainly, no Muslim or Jew who has the same beliefs as Kim Davis should have their conscience rights violated in this way.”

Davis says that she “want[s] to continue to perform my duties, but I also am requesting what our Founders envisioned – that conscience and religious freedom would be protected. That is all I am asking. I never sought to be in this position, and I would much rather not have been placed in this position.”

“I intend to continue to serve the people of Rowan County, but I cannot violate my conscience,” says Davis.

Davis has worked in the Rowan County Clerk's office for 27 years, and was elected to her position in November 2014. She was preceded in the position by her mother, who passed away in 2011 and was the impetus for Davis' born-again Christianity.