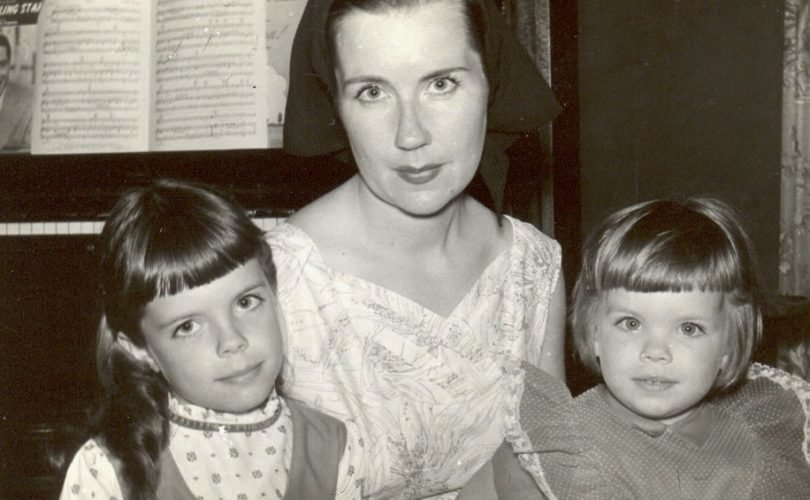 Beck, right, with her mother and sister.Courtesy of Robin Beck

Robin Teresa Beck, 59, is not afraid to tell anyone, even Pope Francis himself, that homosexuality turned her life into a living hell of suffering, darkness, smashed dreams, and lasting regret. And after 35 years of homosexual behavior over the course of 12 relationships, Robin knows exactly what she’s talking about.

“From my experience, it is impossible to have a healthy gay relationship because it goes against the way God made us to be,” she told LifeSiteNews, calling it “cruel” for any religious leader to look favorable upon such a relationship.

It was only five years ago that everything changed for Robin, a staunch Protestant who twisted scripture to suit her gay lifestyle, when one day — on a whim — she decided to enter a Catholic Church to receive ashes during the Lenten Ash Wednesday service. She only came for the ashes, but God had other plans.

Robin tells the dramatic story of her life in her 2012 book I just came for Ashes. She came from a broken home where both her parents were alcoholics. Her father was physically abusive to her mother and struggled with anger.

At a young age Robin witnessed how her father hit, shoved, and did “degrading things” to her mother. She remembers standing nearby watching her mother cry as she suffered abuse. Robin lived in deadly fear of her father, believing that he could kill her at the slightest provocation.

She has only one memory of any tenderness from her mother. She was about 3 years old when her mother one day unexpectedly drew her close to nestle her in her arms. It was the only time in Robin’s entire childhood that she felt “safe and happy.”

By age 5, Robin became the one who consoled her mother after she had suffered abuse at the hand of her husband. She remembers thinking of herself as a rescuer.

Religion became an escape for Robin. Going to church services with her elder sister became her life. She longed for God to come and rescue her from the daily verbal, emotional, and physical abuse she experienced at home.

Robin will forever be haunted by the day she learned as a seven-year-old that her father had left home for good. She remembers storming out of the house, looking up at the sky and shouting: “Why God? Out of all the kids in the world, why did you choose this to happen to my family?”

Robin was now in high school. Her dad was physically absent and her mother struggled with a debilitating illness. Looking back at this time, she now realizes she had a huge void in her heart and was desperate for someone — anyone — to love her.

A male high school music teacher recognized in her a gift for singing. He began to treat her like the daughter he never had. She basked in his attention. She spent many happy moments with his family, experiencing a life of love and laughter that was so alien to her, but so refreshing and life-giving. But after graduation, the relationship faded and Robin felt betrayed by him. She vowed to never let another man into her heart again.

At college, 19-year-old Robin met a woman who invited her to a charismatic prayer meeting where she experienced an outpouring of God’s love and became on fire for the Christian faith. Robin grew close to her newfound female friend. An intimate relationship developed. It quickly became sexual. It lasted seven months and Robin was devastated and heartbroken when it ended.

Robin tried to run away from her problems by switching to a Bible college. She was enraged one day to find out that her former female friend had started dating a man. She sought advice from one of her female teachers, only to strike up a close friendship that became intimate and then sexual in a matter of months.

She remembers becoming a “total basket case” during that time and concluded that there was “something terribly wrong with me.” The women’s homosexual relationship eventually came to the attention of the college’s administration, which wanted to fire the teacher and dismiss Robin but allowed them to finish the semester.

Robin and the teacher lived together for a number of years. They became part of a church where gay people congregated. They decided early on to put a stop to their homosexual activity. Robin hoped their relationship would last forever. But it didn’t. Robin believes her struggle with rage, insecurity, possessiveness, and jealousy eventually drove the woman away.

‘Looking for the mom I never had’

“Things would start out great, and I was always sure that this time, I had finally found the right partner. But in less than a year, I’d be miserable, wonder[ing] what in the heck I was doing, and leave,” she wrote in her book.

She bounced from one lesbian relationship to another, often overlapping them, making sure that she would never have to spend a moment where she was alone and unloved.

Looking back, Robin now realizes that she continually chose partners who, like herself, were psychologically challenged. “I kept hoping to find a stable, loving, nurturing woman to heal my heart (in other words, I was looking for the mom I never had),” she wrote.

Robin told LifeSiteNews that she now believes the “majority of lesbians who are craving relationships with other women have a deficiency in their relationship with their mother.”

“I know it’s true for me. I did not get the nurturing I needed from my mom. I had this woundedness from my mother and I tried to have it healed by turning to other women and asking them to give me what my mother was not able to.”

Robin was now 46 and on her eleventh relationship with a married woman who had children. “I should have run for the hills, but pitiful, weak-willed, foolish me caved in to my emotional neediness and got involved with her,” she wrote.

A serious sickness sent her to the hospital for two weeks. She partially regained her health only to discover that this woman had already decided to leave the relationship.

“It was one of the most painful and heart-wrenching days of my life,” she wrote.

The heartbreak afforded Robin an occasion to examine her life.

“I looked at this 11-car train wreck and knew that God wanted me to sort through the wreckage, but most days, I just couldn’t deal with it. I would lie face down on the floor and cry out, ‘Oh, God, please tell me this isn’t my life!’ I kept hoping to wake up and find it was all just a really, really bad dream. But it was my life, and I had to own it—every last bit of it.”

‘Repent and believe in the Gospel’

It was around this time that on a whim she entered a Catholic Church on Ash Wednesday and went up to receive blessed ashes. The ashes were traced on her forehead in the sign of the cross with the words: ‘Repent and believe in the Gospel.’ She felt God stirring her heart. She attended Mass the following Sunday and felt inexplicably drawn to the white host that the priest called the “body of Christ.” She continued to attend the weekly Sunday mass.

But Robin remained unconvinced that homosexuality was wrong. She believed that her problem was that she did not know how to create a “healthy gay relationship.” Yet another woman entered her life. Robin took things slowly hoping that a friendship would grow into a lifelong commitment.

“The bad and sad news is that what started off as a terrific friendship, which was two years in the making, ended up in ruins when we started to cross the line and go places where God said, ‘Do not trespass!’ As had been true with the 11 relationships that preceded it, this one became crazy and dysfunctional literally overnight, and all hopes of a blissful union evaporated (or, more likely, blew up in my face).”

Robin had now hit rock bottom, accepting that there “could never be a ‘right’ relationship with another woman.” In the midst of her brokenness and anguish, she cried to God for help. She received the strength to surrender her sexuality over to God, vowing to follow his word on the matter from that day forward. This happened five years ago, on the weekend of her 54th birthday.

“As painful as my birthday weekend was, I am so grateful that it was awful enough to wake me up and bring me to my senses (and my knees). I walked away from gay life and haven’t for a split second thought about going back,” she wrote.

Robin began instruction in the Roman Catholic faith and was received into the Catholic Church during Easter of 2010. She just celebrated five years of what she called “walking in victory.” She believes this is a “huge miracle.”

“And the miracle is that for the last five years, I have been OK with being God’s special ‘somebody.’ I’ve been OK with everyday waking up by myself and waking rejoicing that I have a right relationship with God now. It’s just his amazing grace that sustains me being alone. That’s the miracle,” she told LifeSiteNews.

To anyone who will ask, Robin will say that the last 5 years of her life have taken her completely by surprise.

“You have to believe when I tell you, I never planned on any of this. I was caught off guard, taken by surprise, hoodwinked, and ambushed by Sovereign mercy. Seriously, no kidding! It’s the truth—I just came for ashes!” she concludes her book.