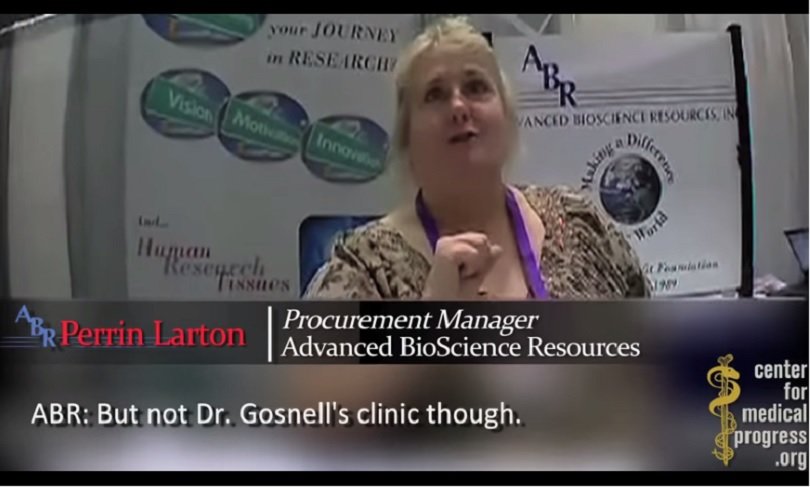 LOS ANGELES, September 1, 2015 (LifeSiteNews) – Kermit Gosnell has lurked behind the scenes in much of the recent discussion of Planned Parenthood's organ harvesting business. In a newly released video, the head of a human biologics company mentions Gosnell by name and discusses how women are often so dilated that their babies “just fell out,” giving the company an intact fetal cadaver.

The latest investigative video from the Center for Medical Progress features footage of Perrin Larton, the Procurement Manager for Advanced Bioscience Resources, Inc. (ABR). The company, which was founded in 1989 by Linda Tracy, procures fetal organs from Planned Parenthood for medical experimentation.

“I literally have had women come in and they’ll go in the [operating room] and they’re back out in three minutes, and I’m going, ‘What’s going on?’” Perrin said. “Oh yeah, the fetus was already in the vaginal canal whenever we put her in the stirrups. It just fell out.”

Previous videos have shown that such companies prefer to have intact bodies, which maximizes the number of organs that can be culled. Since some Planned Parenthood facilities are compensated by the organ, intact deliveries are beneficial for them, as well.

In a previous video the director of research for Planned Parenthood Gulf Coast, Melissa Farrell, told investigators, “If we alter our process, and we are able to obtain intact fetal cadavers.”

“This latest video reveals a sickening disregard the most basic human values. We don't allow people to do these things to dogs, cats or turtles. How can we allow Planned Parenthood to do these things to innocent babies?” said Jack Hart, the president of Right to Life of Greater Cincinnati. “And we fund this with our tax dollars!!”

The video also reveals that organ brokers vying with one another for access to Planned Parenthood's “volume” of aborted babies' body parts sometimes boast that, by paying taxes, they fund the abortion giant.

Cate Dyer, who worked for ABR before starting StemExpress, said she cited the fact that her company is a for-profit corporation – as opposed to ABR, which does not pay taxes – in an attempt to convince Planned Parenthood facilities to work with her.

Dyer reveals she would tell Planned Parenthood officials, “I pay tax that actually donates – ends up funding programs back to you guys.”

She said certain Planned Parenthood employees received double compensation, working for ABR, as well. Dyer complained, “For a long time there were certain clinics that, because they had paid advisers that were sitting on boards for these clinics, that were also an advisor to ABR, you were just never going to go anywhere [but] with them.”

Dr. Katharine Sheehan, who was medical director of Planned Parenthood of the Pacific Southwest (PPPS) until 2013, confirms on the video that the organization has had a longstanding relationship with ABR.

Perrin also discussed taxpayer funding of abortion. she said that federal policy had focused on banning taxpayer funding of embryonic stem cell research, but medical experimentation on aborted cadavers “got lost in the mix,” so ABR “continued to send tissue to people like NIH [National Institutes of Health], even though the government was paying for it.”

“Now they're trying to make abortion illegal, and that's where we get our tissue,” Perrin said.

She said the company tries to be “politically correct” to avoid attracting legal scrutiny.

“As we detailed in our letter to Congress, for Planned Parenthood and their partners, being politically correct should now be the least of their concerns,” said Charmaine Yoest, president of Americans United for Life. “In six separate areas, these videos reveal possible felonies. Americans are reacting in horror to the accumulated weight of unethical and calloused behavior revealed by these videos.”

“If what we are seeing isn’t illegal, it should be,” she said.

Today's video follows the release of additional footage yesterday that corrected an error in the timestamp in a previous video. Although it did not add additional context to the previously released video, Fusion GPS – a Democratic opposition research firm – had cited such minor technical details in a Planned Parenthood-funded report stating that CMP's videos have no “evidentiary value” and “lack credibility as journalistic products.”

CMP's lead investigator, David Daleiden, agreed with Yoest that “it is imperative for lawmakers and law enforcement to act decisively to determine the full extent of Planned Parenthood and their proxies’ lawbreaking, hold them accountable, and stop the taxpayer funding of these barbaric atrocities against humanity.”