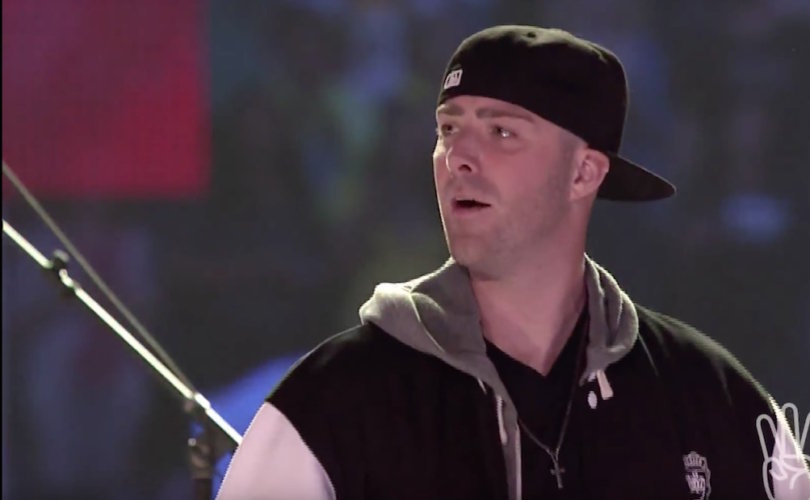 OTTAWA, November 10, 2016 (LifeSiteNews) — Canadian rapper “Classified” told the 16,000 students attending WE Day in Ottawa that “it should be illegal to vote for Trump” — a statement that drew enthusiastic cheers from the waving teens and ’tweens who packed Ottawa’s Canadian Tire Centre.

But as Jack Fonseca of Campaign Life Coalition points out, the implicit message is that it would have been better to vote for abortion extremist Hillary Clinton.

Abortion extremist Prime Minister Justin Trudeau also spoke at the Ottawa WE Day, his second appearance in as many years. Despite telling the youths at WE Day 2015 that what people say “matters deeply,” Trudeau has banned anyone with pro-life convictions from running as a candidate for the Liberal Party and refuses to allow Liberal MPs vote their conscience on life issues.

Fonseca noted that the Ottawa Catholic School Board (OCSB) is a WE Day “educational partner,” and Catholic students take part in the event.

Of the rapper’s comments, he said, “It’s simply inappropriate in the presence of Catholic students to have someone suggest that voting for a rabid pro-abortion candidate is somehow acceptable or desirable. It’s absolutely terrible that they did that.”

The WE Day movement, which grew out of the Free the Children charity, also lists Toronto, Halton, Edmonton and Calgary Catholic school boards as educational partners, as well as the Archdiocese of Chicago Catholic Schools in the U.S.

Moreover, having children aged 12 and up listening to an entertainer who sings about smacking his girlfriend and going to strip joints is itself highly questionable.

Indeed, 38-year-old Nova Scotian Luke Boyd, the married father of three who “raps” under the name Classified, has penned such lyrics as: [vulgarity alert, reader discretion advised]: “…one time my girl talked sh*t and I smacked her up”, boasts about going to “the cheapest strip club getting a lap dance…b*ner in my track pants”, or relating how “At the Jr. High Prom party, we was gonna f*ck (YUP!)”

Kelly McKibbin, co-chair of the OCSB United Way Campaign, told LifeSiteNews in an email that “we have no comment at this time” on “Classified’s performance at yesterday’s WE Day celebration.”

Trudeau told the youth on Wednesday, “I know that a number of you probably stayed up a little later last night to watch some of the election returns with your families, and I know that some of you might have had questions for your parents this morning.”

Trudeau stated he will work with “President-elect Trump’s administration as we move forward in a positive way for, not just Canadians and Americans, but the whole world.”

WE Day grew out of the Free the Children charity founded 21 years ago by Catholic Craig Kielburger, then aged 12, to fight child poverty and oppression.

Marc Kielburger subsequently joined his younger brother in the enterprise, and in July 2016, Free the Children was rebranded and, along with the Me to We “social enterprise,” became WE — a movement that, it claims, “empowers people to change the world.”

WE Days are the “manifestation” of WE, and the high-energy, stadium-sized events feature celebrities, entertainers, and speakers who exhort their impressionable audience to be agents of change.

Students “earn” their right to attend WE Day by signing on to the WE Schools program and committing to one global and local action for change during the academic year.

While students can choose any charity or cause they wish, WE encourages activism that falls into five themes: environment, diversity, reconciliation, youth service, and Canada and the world, Craig Kielburger explained in an Ottawa Citizen video.

While doubtless the students contribute to many good causes, WE Days have inexplicably and consistently featured guests whose views undermine Christian morality and contradict Catholic beliefs, particularly the dignity of women, sanctity of human life and the sacrament of marriage as a permanent union of one man and one woman.

Performers have included U.S. rapper Macklemore, whose song “Same Love” became an anthem for the campaign for homosexual “marriage”; Kardinal Offishall, whose music and videos demean women as sex objects, and glorify loose living, promiscuity, and sexual hedonism, in Ottawa in 2015; rapper Big Sean, whose lyrics refer to women as “b*tches” and “whores”, in Toronto, and Jennifer Lopez, who performed a sexually-charged mock striptease in Vancouver in 2014, and abortion advocate Harry Potter film star Emma Watson in Ottawa 2015.

There are other troubling issues with WE: Mark Kielburger admitted in March 2011 in a letter to the Ottawa Catholic School Board that the then Free the Children charity stocked contraceptives at their Baraka Medical Clinic in Kenya. The Kenyan bishops asked Canadian and U.S. Catholics to stop funding the charity for this reason.

In 2014, the organization defended the hire of an employee who worked directly with children while moonlighting as a graphic sex-show performer in a homosexual-themed troupe. The employee stepped down after LifeSiteNews went public with the story.

The brothers signed a Mother’s Day Manifesto in 2011 denouncing the Conservatives’ planned funding cuts to the International Planned Parenthood Federation, describing the abortion provider as “an organization that provides reproductive health services abroad,” and the government’s action as a “paternalistic refusal to offer women in Africa the same rights offered to women in Canada.”

The Kielburgers stated in 2012 that they are Catholic but take no position on abortion.