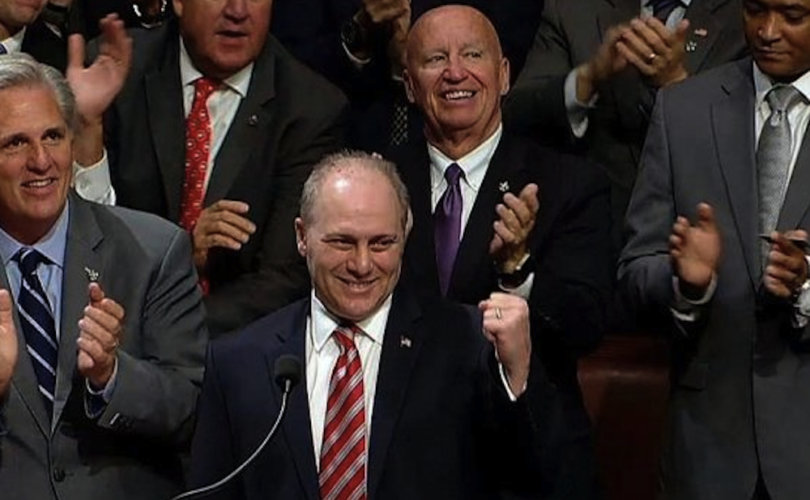 WASHINGTON, D.C., October 2, 2017 (LifeSiteNews) — U.S. Rep. Steve Scalise credits “the power of prayer” for being alive after a bullet nearly killed him.

The Majority Whip returned to Congress on Thursday to thunderous applause. He walked in leaning on leg supports but under his own power. As soon as he entered the chamber, the entire House of Representatives erupted with shouts and cheers.

“It starts with God,” the Louisiana Republican told his peers. “He really did deliver for me and my family.”

He told them that since the shooting he has experienced a spiritual revival. “It just gives you that renewed faith and understanding that the power of prayer is something you cannot underestimate.”

On June 14, James Hodgkinson slipped into a Congressional baseball practice just outside Washington, D.C., asked if Republicans or Democrats were on the field. He then started shooting.

Scalise told the packed House that after he was shot, he was unable to move. “I just started to pray,” he shared. “And (prayer) gave me an unbelievable sense of calm. At that point, it was in God’s hands.”

“I prayed for very specific things. And, I will tell you, pretty much every one of those prayers were answered,” Scalise said, barely keeping his composure. “I’m definitely a living example that miracles really do happen.”

Scalise thanked those who had prayed for him and visited him in the hospital through multiple surgeries and in rehab during his three-month recovery. He thanked his wife and family and his colleagues.

Scalise took special note to thank Capitol Police officers Crystal Griner and David Bailey, who were assigned to his detail that day. At the risk of their own lives, they stopped the rampage.

He praised the officers for acting “so quickly – and even after being shot both themselves, continue(d) to engage the shooter and ultimately got him down – which not only saved my life but saved the lives of a lot of other people who are here in this chamber today,” he said.

“You are my hero,” he said as he pointed to one of the officers. “You saved my life.  Thank you so much.”

Virginia police officers Nicole Battaglia, Alex Jensen, and Kevin Jobe were also first responders who stopped the shooter. All five were honored by President Donald Trump with the Medal of Honor.

Scalise also thanked Rep. Brad Wenstrup, R-Ohio, a physician who rushed to his side and applied a tourniquet to stop the bleeding so he could be taken to an ambulance.

“The tourniquet he applied saved my life so that I could actually make it to the hospital,” Scalise said, attributing Wenstrup’s presence to yet another of the “little miracles” that he and his wife thank God for that fateful day.

He also thanked Dr. Jack Sava and his team of surgeons at MedStar Hospital, who through a series of operations brought Scalise from near death to walking back into Congress.

Scalise especially expressed great gratitude for the “outpouring of love and warmth” that even opposing members of Congress showed both him and his family.

While admitting he’s a political fighter with passionate beliefs, Scalise said his ordeal reminded him of how important it is to “rise above” differences. “The People’s House” is the appropriate place for discourse and argument in working out America’s concerns, he said, but of paramount importance is that opponents respect each other.

Scalise also was impressed by the number of foreign leaders he had never met who visited him and sent him well wishes. In thinking about that, Scalise concluded that the freedom and democracy that America represents is crucial to the world.

Scalise has a long road of outpatient rehabilitation ahead of him. But if sentiment in the U.S. House is any barometer, Washington, D.C., is exuberant over his recovery so far.

Scalise tweeted a picture of his wife and himself in silhouette, gazing out at the National Mall.

Hodgkinson, a Bernie Sanders supporter, had posted on Facebook before his shooting rampage at the congressional baseball practice: “It’s Time to Destroy Trump & Co.” He ‘liked” several liberal pages, including the Southern Poverty Law Center that falsely labels pro-life and pro-marriage organizations as “Hate Groups” alongside neo-Nazis and the Ku Klux Klan.

The pre-planned terrorist attack was described by one eyewitness as designed “to kill as many Republican members (of the U.S. House) as possible.” Hodgkinson was killed on the scene by police.