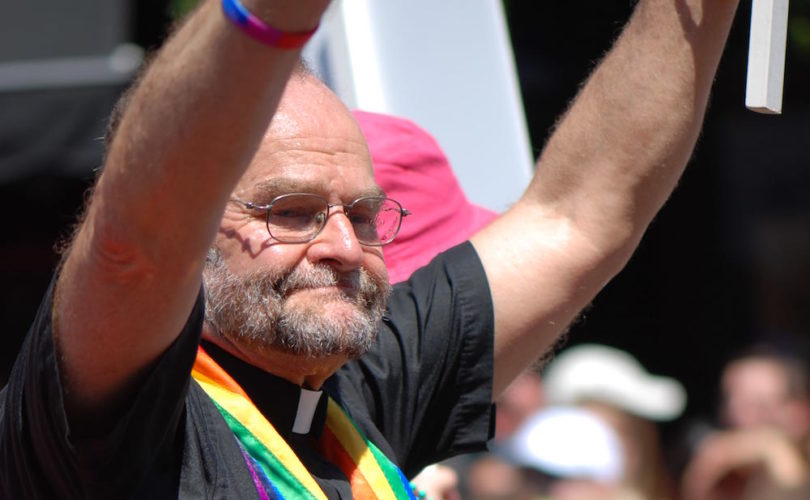 The Court in Kentville heard the first witness testify that he saw Hawkes performing oral-genital actions on a teenage male at the pastor’s Nova Scotia home about 40 years ago.

Witness Douglas Aylward said he was 16 years old when a group of friends returned to Hawkes’ home after drinking at a local tavern. At one point, the minister pulled the teenager inside a small bathroom, told him he had been watching him and was “80 percent sure I was gay.”

“It was pretty uncomfortable,” the witness said.

It was when they returned to the living room that Aylward said he looked over to see Hawkes sexually abusing his friend.

“I couldn’t believe it,” the witness testified.

Hawkes, a senior pastor at Metropolitan Community Church of Toronto who lives with his male “husband,” has become a major icon of homosexual activism in Canada.

He famously flouted Canadian law by illegally “marrying” a homosexual couple in his Toronto church in 2001. When the Canadian government would not recognize it, he took the government to court. Subsequently, the Ontario Superior Court of Justice recognized the “marriage” as legal, beginning a process of judicial activism that eventually culminated in the legalization of homosexual “marriage” by Canada’s Parliament in 2005.

For his “lifetime of distinguished service” in promoting homosexual ‘rights’ and ‘equality,’ Hawkes received Canada’s highest civilian award — the Order of Canada — in 2007. In 2014, the WorldPride Parade in Toronto honored Hawkes by making him grand marshal of the event.

Hawkes has pleaded not guilty to the charges.

He is being represented by civil rights lawyer Clayton Ruby, known for his work in defending abortionist Henry Morgentaler and convicted child pornographer Benjamin Levin, as well as for bringing legal action against the British Columbia government for approving a Christian-based school of law with its Christian code-of-conduct governing sex.

Ruby challenged the witness during the morning’s proceedings on his ability to remember an event from 40 years ago.

“It’s not what I remember, sir. It’s what I cannot forget,” the witness said, adding: “After 40 years, I’m trying to forget everything I can about that night.”

A number of witnesses are lined up to testify against Hawkes during the trial that is expected to last the rest of the week.