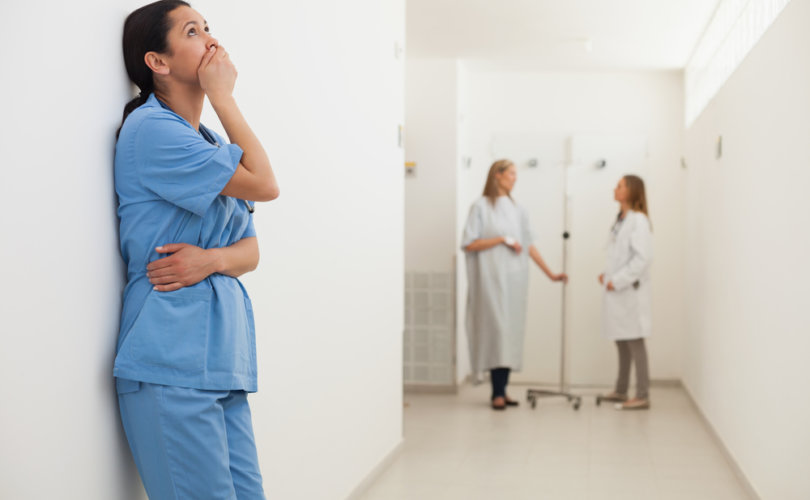 March 13, 2017 (LiveActionNews) — In a damning new video released by Live Action, former Planned Parenthood manager Sue Thayer describes the horrifying situations she experienced while assisting with abortion procedures, and the desensitization workers had to the deaths of innocent children.

Thayer describes how when she first began her tenure at Planned Parenthood, she was asked to stand outside the abortion room to watch a procedure because most workers fainted if they saw the abortion up close. Gradually, Thayer was ushered farther into the room until she was able to stand by the foot of the bed and assist with the procedures.

“The contents of the uterus, or products of conception,” Thayer describes, “are emptied into this gallon jar, and they turn it off and take this suction thing off the gallon jar, and set it in this passthrough.”

Thayer describes workers taking the bodies of aborted children and bringing them into a separate room to piece the body parts back together. She describes a particular moment, when she sifted through the organs and remaining parts, when she discovered that the woman was pregnant with twins.

“I remember standing there looking at that, and I said, ‘Why are there three arms?'” Thayer recalled. “And the gal that was training me said, ‘Twins — it was twins!'”

Instead of informing the mother, the Planned Parenthood worker told Thayer they concealed the information in order to avoid upsetting women. Thayer adds that children were dumped into a sink after abortions, and workers would “hint the plunger, and then it would flush.”

“I just remember standing there thinking, ‘All those babies are in the Des Moines sewer system,'” Thayer said.

Other body parts were stuffed into “little red bags with a twist tie” and thrown into the freezer, the former Planned Parenthood manager revealed.

“I remember kind of thinking, ‘I wonder what they do with those. Because if there is a buck to be made, they will sell those.'”

Thayer’s prediction was confirmed after the Center for Medical Progress released over a dozen videos exposing top-level Planned Parenthood staff discussing the harvesting and trafficking of aborted baby parts. In the chilling tapes, executives — some over meals — discuss altering abortion procedures in order to procure “intact” fetal parts in order to make a profit.

As Planned Parenthood’s taxpayer funding is on the line with the new pro-life Congress and administration — both of which have vowed to redirect taxpayer subsidies toward comprehensive health centers — the corporation is propelling the false narrative that its focus is health care, not abortion.