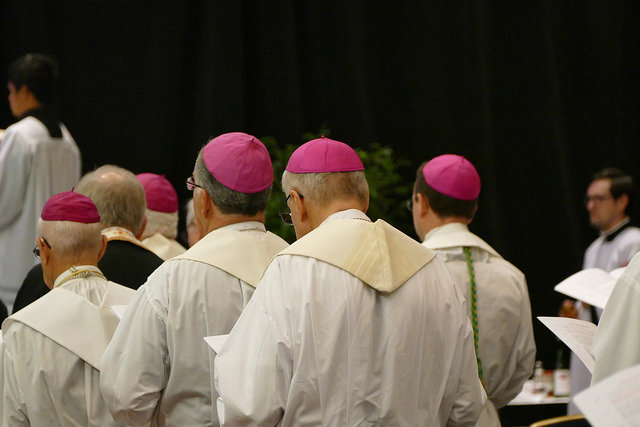 Catholic prelates pray at the fall 2016 meeting of U.S. bishops.

December 1, 2016 (LifeSiteNews) – Under the Catholic Church's Code of Canon Law, it would be difficult for Pope Francis to remove from the cardinalate the four cardinals whose dubia on Amoris Laetitia has gained so much attention, according to renowned canon lawyer Dr. Edward Peters.

A Spanish news agency has majorly corrected its story claiming Archbishop Vito Pinto, the dean of the Roman Rota, said that the questions of Cardinals Raymond Burke, Joachim Meisner, Walter Brandmüller and Carlo Caffarra on Amoris Laetitia could be punished with demotion. The agency says that they “put words in” the archbishop's mouth and that he really said the opposite: that Pope Francis won't “withdraw from them the Cardinalate dignity” even though in “other times…those measures were used.”

But as Peters laid out on his popular canon law blog, regardless of what Pinto may or may not have said, the eleven sections (canons) of the Code of Canon Law that deal with the removal of cardinals are generally seen as limited. The Code of Canon Law grants cardinals certain rights and specifies that they can be removed from their appointments for “grave cause” or for committing a “canonical crime.”

“Appointments to the office of cardinal are made for an 'indefinite period', meaning that one holding such an appointment can be 'removed' from said office for 'grave causes according to the manner of proceeding defined in law' (1983 CIC 193 § 1) or could be 'deprived' of said office as punishment for a canonical crime duly alleged and proven (1983 CIC 196 § 1),” Peters wrote. The suggestion that any of the four cardinals have committed a canonical crime (an action defined by the Church as a crime) is absurd, he wrote, so “that leaves only the possibility of Francis treating a cardinal’s asking questions about his document Amoris as constituting 'grave cause' to remove four cardinals from office (and along the way eliminating two electors currently eligible for the next papal conclave).”

At this point, any talk of removing the four cardinals is speculative, Peters wrote, because Pope Francis is the one with that authority and he hasn't publicly commented on it.

“Assuming, against all precedent and common sense, that one’s publicly asking the pope to clarify important questions raised in the wake of his document amounts to canonical 'grave cause' for stripping several prelates of their offices,” they would still be entitled to defend themselves in the appropriate Church court, Peters explained.

Of the substantial “clarification” of Pinto's remarks, Peters commented: “It seems Pinto meant that OTHER popes could remove cardinals but Francis is not one of them. Huh? Either popes, all popes, can remove cardinals from office or they can’t. (I hold they can, I thought Pinto held so too.) Either popes, all popes, are morally bound to observe due process in such removals, or they aren’t (I hold they are, I could not tell whether Pinto thought so too).”

Peters also noted that in nations governed by common law, it's frowned upon and extremely rare for judges to “weigh in on the political or social controversies swirling around them.” This makes it likely that “controversy over Pinto’s ominous remarks were the most intense among Catholics coming from common law nations, where the sight of judges speaking this way is foreign to our sensibilities about judges and justice.”

“I'm not sure that's such a bad thing,” he concluded.