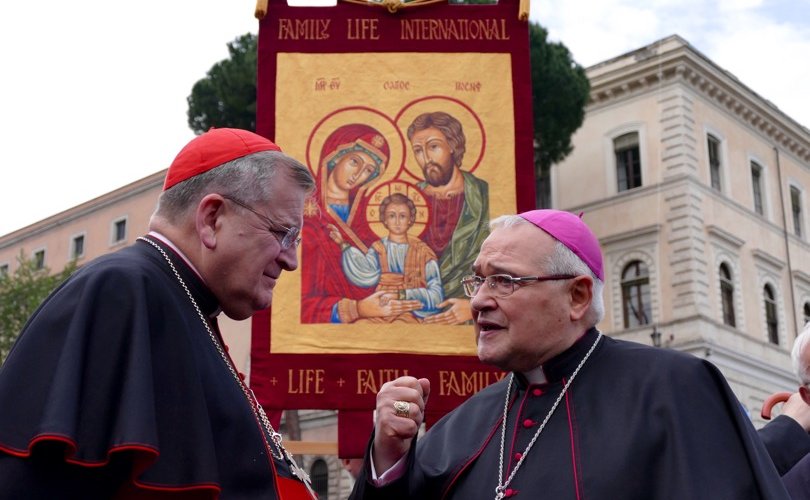 March 7, 2017 (LifeSiteNews) – An Italian archbishop close to Pope Benedict XVI says the former pope decided to resign as a result of “tremendous pressure.”

Archbishop Luigi Negri who says he has visited Pope Benedict “several times” since his resignation in 2013, is the only Italian bishop to have ever participated in the annual pro-life march in Rome. Negri resigned as archbishop of Ferrara-Comacchio in February after reaching the mandatory retirement age of 75.

In an article published Monday by news outlet Rimini 2.0, Archbishop Negri said that while he has little knowledge of the inner workings of the Curia, “I am certain that the truth will emerge one day showing grave liability both inside and outside the Vatican.”

“It is no coincidence that in America, even on the basis of what has been published by Wikileaks, some Catholic groups have asked President Trump to open a commission of inquiry to investigate whether the administration of Barack Obama exerted pressure on Benedict,” he said. It remains shrouded in mystery for now, he said, “but I am sure that those responsible will be found out.”

Concluding the point, he said that as he approaches his death the first question he will ask St. Peter will be “exactly about this issue.”

In his February 11, 2013 speech where he announced his resignation, Pope Benedict XVI cited his deteriorating “strength of mind and body” leading to his “incapacity to adequately fulfill the ministry entrusted” to him. He noted that he renounced the papacy with “full freedom”

Nevertheless, the resignation, unprecedented in modern history, sent shockwaves throughout the world with a flurry of suggestions that Benedict was forced to resign. The concerns were reinforced by words that Benedict himself said at his own election to pontificate in 2005. At his first Mass as Pope, the Holy Father said, “Pray for me, that I may not flee for fear of the wolves.”

Archbishop Negri was also asked about the dubia of the four Cardinals – Burke, Brandmuller, Caffarra and Meisner – who are seeking a clarification from Pope Francis on Amoris Laetitia.

“Amoris Laetitia needs clarification, unfortunately, the current leader of the Church still remains silent,” he said. “I think that the Holy Father should respond, although he seems to have decided to the contrary.”

“Unfortunately it has unleashed a real hysteria against these four cardinals who were all blamed,” the archbishop said. He called the suggestion of some to remove them from the College of Cardinals “disgusting.”

Those who are normally papal critics, he said, “for a time have become hyper papists for their own ends,” he said.