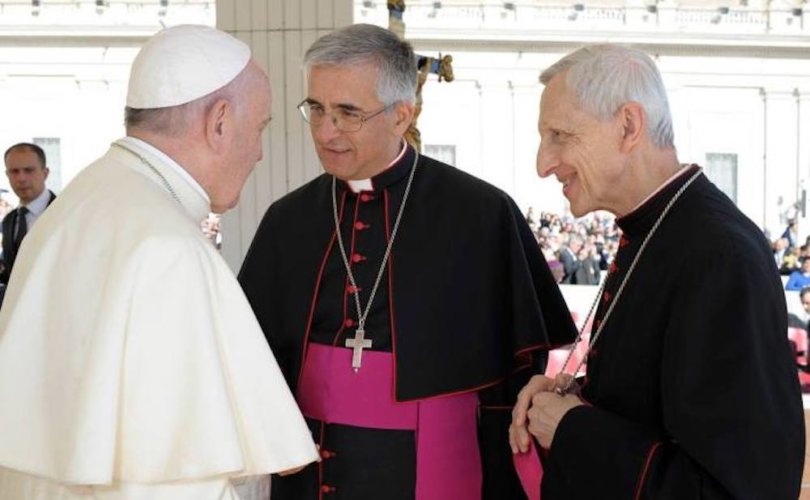 ROME, April 19, 2019 (LifeSiteNews) — Documents obtained by LifeSite show that an Italian bishop has ordered a priest to cease celebrating the Mass in the Extraordinary Form, after the traditional liturgy drew an increasing number of young lay faithful.

Bishop Antonio Napolioni, of the northern Italian diocese of Cremona, is upholding a ten-year ban on the Latin Mass begun by his predecessor, on the grounds that such “objectively disharmonious initiatives” threaten “ecclesial communion” and should not be introduced into the diocese.

Bishop Napolioni has claimed that the Vatican backs his decision, despite its apparent incongruity with Pope Benedict XVI’s 2007 motu proprio Summorum Pontificum which fully liberalized the celebration of the Traditional Latin Mass if a “stable group” of faithful asks for it.

Observers therefore see Napolioni’s latest crackdown on the traditional Mass as an abuse of power with consequences reaching beyond the confines of Cremona.

The case has been submitted to the Congregation for the Doctrine of the Faith (CDF), following Pope Francis’s suppression of the Pontifical Commission Ecclesia Dei and transferal of its work to a special section of the CDF.

In a letter (obtained by LifeSite) to Cardinal Luis Ladaria, SJ, Prefect of the Congregation for the Doctrine of the Faith (CDF), dated Mar. 13, 2019, representatives of a group of lay faithful in Cremona chronicle the ten-year ban on the Latin Mass in their diocese, provide supporting documentation, and request that the CDF intervene.

According to the letter, a first attempt to establish the traditional Latin Mass in Cremona was made in March 2009, when representatives of a group of more than 100 lay faithful wrote to then-Bishop Dante Laffranconi.

In May 2009, Bishop Laffranconi responded in writing, rejecting the initiative on the grounds that “in our diocese disharmonious initiatives” should not be introduced “forty years” after the promulgation of the Novus Ordo by Paul VI.

In June 2009, the group sent a second letter to the bishop, asking him to reconsider his decision. One month later, Bishop Laffranconi responded reiterating his decision, saying it was “in harmony both with the letter and spirit” of Summorum Pontificum.

In January 2010, the group wrote to the Pontifical Commission Ecclesia Dei, informing them of the correspondence. One week later, the Commission replied in writing that they had “contacted the local Ordinary in question.”

Meanwhile, the group heard nothing further from the diocesan curia in Cremona. Their efforts halted when the priest who offered the Mass passed away.

In 2016, following Laffranconi’s retirement, Antonio Napolioni was appointed by Pope Francis as the new bishop of Cremona. With renewed hope, the group, now decreased but still numbering around 40, organized a monthly afternoon of catechesis followed by the traditional Mass, at a little chapel privately owned by a layman.

According to the letter obtained by LifeSite, after just two meetings, the owner, under pressure from the diocesan Curia, withdrew his permission for the group to use the chapel.

In response, on January 31, 2017, Mr. Luigi Casalini (a layman from Bozzolo in Cremona and founder of Messainlatino.it) wrote to Bishop Napolioni and his Vicar General, Fr. Massimo Calvi, notifying them that a “stable” group of lay faithful had formed to “promote the regular celebration” of the extraordinary form of the Mass in accord with Summorum Pontificum.

Casalini said the group was motivated not by a “sterile nostalgia for the past” nor by any form of “diffidence towards to the celebration of the ordinary form” (which many of them also attended) but by the “desire to foster [their] shared liturgical sensibility and to be able to do so within the diocese.”

He also said the group had located a church in Bozzolo where the parish priest would welcome them, as long as they found a priest who could celebrate the traditional Mass.

Three months later, Bishop Napolioni responded with a letter rejecting the request on the same grounds given by his predecessor.

In April 2017, Casalini wrote to Ecclesia Dei informing the commission of the correspondence and asking them to intervene. Three weeks later, Archbishop Guido Pozzo, then-head of the pontifical commission, wrote to Casalini, informing him that the commission had contacted Bishop Napolioni to ascertain “his reasons.”

Then, in September of the same year, Casalini received a letter from Bishop Napolioni claiming that, in August, he had received a definitive response from Ecclesia Dei supporting his decision regarding the Latin Mass in Cremona. In his letter to Cardinal Ladaria, Casalini notes that neither he nor anyone else he knows has seen the contents of the alleged “rejection letter” from Ecclesia Dei.

In December 2017, Casalini again wrote to Bishop Napolioni asking him to clarify his reasons for denying the group’s request. The vicar general for the diocese, Msgr. Massimo Calvi, replied by email expressing the bishop’s wish for a private meeting.

At the Feb. 2018 meeting, the Bishop reiterated his refusal to allow the Latin Mass in Cremona.

Then, in late spring, 2018, several members of the lay group met Fr. Giorgio Viganò, a young religious priest belonging to the Congregation of the Barnabites, who was stationed at the Church of St. Luke in Cremona.

Subsequent to their meeting, three members of the group began to attend a traditional Mass sine populo celebrated by Fr. Viganò, in accord with Summorum Pontificum (art. 2, art. 4). As word spread, the number grew to around 60, mostly young people ages 20-35.

Given the sustained interest by the laity, Fr. Viganò decided to celebrate the traditional Latin Mass weekly, beginning on the first Sunday of Advent, 2018.

Two months later, on February 2, 2019, Fr. Viganò’s superior, Fr. Emiliano Redaelli, was summoned to the Curia offices by the vicar general. One day later, both he and Fr. Viganò were called in again.

According to the letter obtained by LifeSite, in both meetings Bishop Napolioni and his vicar general firmly ordered Fr. Viganò to stop celebrating the Mass in the Extraordinary Form. Fr. Viganò obeyed the order, despite its evident contrast with Summorum Pontificum.

On February 10, 2019, Fr. Viganò communicated the decision to the faithful. One month later, he wrote to Cardinal Ladaria confirming his willingness, if asked, to continue to celebrate the Extraordinary Form of the Mass for the faithful, in whom he said he observed a “true and serious devotion.”

News of Bishop Napolioni’s ban on the Latin Mass was soon picked up by Italian Catholic and secular media.

In an interview with La Provincia, Italian Cardinal Giovanni Battista Re, former prefect of the Congregation for Bishops (who is not regarded as a staunch proponent of the traditional liturgy), said he was “stunned” by Bishop Napolioni’s response and doesn’t understand why what is normal in the rest of the world is banned in Cremona.

“The Tridentine Mass is celebrated everywhere, I don’t know why in Cremona it’s not,” he said. “If you go to New York, you find a church at a certain hour with the Latin Mass. Across the world, it’s generally enough to find a priest who is available to say the Mass,” he said.

“I don’t know his reasons, but I will look into it,” the 85-year old cardinal told the Italian daily.

Regardless of his reasons, sources in Cremona who were present at a recent parish meeting told LifeSite that the bishop openly doubled down on his decision, saying he will never allow the traditional Mass in the diocese, that his decision is in keeping with canon law, and that the matter is closed.

While Bishop Napolioni has actively opposed the celebration of the traditional Mass in his diocese, he has welcomed other controversial initiatives.

Last November, following the Vatican Youth Synod, the diocese of Cremona hosted its second “Table of dialogue” with “LGBT Christians.” At least one of the groups present at the meeting has ties with the international coalition that sought to pressure bishops attending the Youth Synod to change the Church’s teaching and pastoral approach on homosexuality.

LifeSite contacted the vicar general of the diocese of Cremona, Msgr. Massimo Calvi, by email to inquire about Bishop Napolioni’s reasons for banning the Latin Mass but has received no reply.

Beyond the ramifications for the Cremona diocese, sources close to the case are concerned that if one bishop can disregard established general norms for the Church (i.e. those laid out in Summorum Pontificum), it will set a dangerous precedent for other bishops who want to close the door on the traditional Mass.

The Cremona case therefore now remains in the hands of the Congregation for the Doctrine of the Faith.