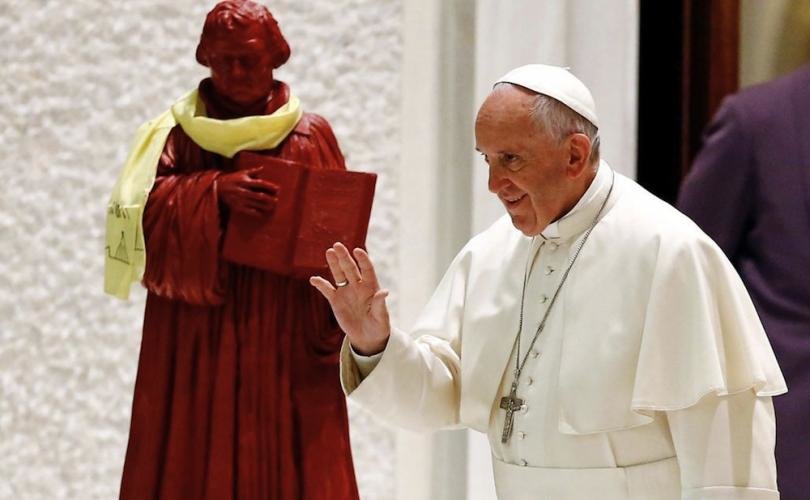 ROME, Italy, June 15, 2020 (LifeSiteNews) – An employee of the Italian bishops’ conference has published a book that he says is drawn from Pope Francis’ teachings found in Amoris laetitia that calls for the Church to overturn its condemnation of homosexual acts.

A new book published by Luciano Moia, a senior journalist for the Italian Bishops’ Conference’s daily newspaper Avvenire, argues that the Church should look at “chastity” within a same-sex relationship the same way she looks at chastity within marriage.

According to a report by the Catholic News Agency (CNA), the proposed change in Christian anthropology “would call for theological and doctrinal changes away from the Church’s teachings on homosexuality, as delineated in the Catechism of the Catholic Church or the Congregation for the Doctrine of the Faith’s statement on the Pastoral Care of Homosexual Persons, which is not quoted by Moia.

In his book, Church and Homosexuality: An investigation in the light of Pope Francis’ magisterium, Moia focuses on the question of chastity, arguing that the definition of the term chastity needs to be revised. He wonders whether chastity in the context of homosexuality is to be understood like marital chastity, namely as “(r)espect, fidelity and commitment to mutual help in the relationship,” or as “absolute abstinence.”

“Maybe the desire to read the issue from a different lens, to open the debate, to listen to the perspective of the base could be the prevailing result, in the conviction that ‘not all discussions of doctrinal, moral or pastoral issues need to be settled by interventions of the magisterium,’” Moia wrote.

Moia also recounted the episode of a leader of the Catholic scouts in Italy being involved as one of the partners in a homosexual “marriage” in 2017, shedding light on what Moia accepts as a way forward in advancing the homosexual agenda.

He praised the way local Archbishop Carlo Roberto Maria Redaelli of Gorizia “threw everyone off. He refused the role of the judge, he didn’t absolve, but neither did he condemn. He invited the community to reflect together to understand if, even from such a divisive occurrence, one can receive aspects of grace. An intervention in search of moderation and of that invitation to welcome, discern and integrate that impregnates the magisterium of Pope Francis.”

Contrary to the attitudes of Moia and Archbishop Redaelli, the Catechism of the Catholic Church is very clear on homosexuality:

“Basing itself on Sacred Scripture, which presents homosexual acts as acts of grave depravity, tradition has always declared that ‘homosexual acts are intrinsically disordered.’ They are contrary to the natural law. They close the sexual act to the gift of life. They do not proceed from a genuine affective and sexual complementarity. Under no circumstances can they be approved.”

Only after stating that homosexual acts cannot be approved does the catechism move on to a discussion of chastity. In other words, chastity for people with homosexual inclinations plainly means absolute continence.

The preface to the book was written by the archbishop of Bologna, Cardinal Matteo Zuppi. News that Zuppi was going to be made a cardinal in 2019 caused the Italian left to cry out, “We have a Cardinal!”

At the time, Zuppi had already contributed an essay to the Italian edition of pro-homosexual Jesuit Fr. James Martin’s Building a Bridge: How the Catholic Church and the LGBT Community Can Enter into a Relationship of Respect, Compassion, and Sensitivity.

As pointed out by CNA, “Alongside Moia’s own take on homosexuality in the first chapter, the book includes interviews from 12 ‘experts,’ of varying levels of professional status and credibility, on the issue of pastoral care for persons with same sex attraction, all of whom were interviewed by Moia in 2018 and 2019.”

One chapter was written by Gianni Geraci, a spokesman for a conglomerate of advocacy groups for homosexuality and gender ideology in Italy.

Even though the book is obviously biased against traditional Catholic teaching, it was published by the Society of Saint Paul, a religious congregation dedicated to spreading the message of Christ through technology and media.

In May, a book commissioned by the Austrian Bishops’ Conference had also argued for a recognition of homosexuality in the Church.

One of the contributors to the book, Fr. Ewald Volgger OT, said, “Just as marriage between a man and a woman is an image of God’s creative love, so is a same-sex relationship an image of God’s attention to human beings.”

“If partners live the gift of mutual love in faithfulness to one another and live their lives with the spiritual gifts of God such as kindness, forbearance, patience, reconciliation, etc., their relationship is also an image of God’s goodness and humanity,” Volgger added.