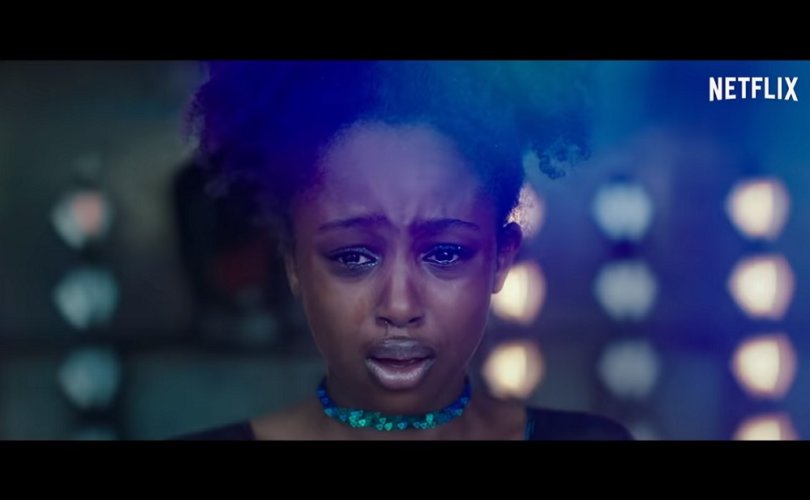 WARNING: The following report contains graphic descriptions of a sexual nature that are not suitable for all audiences.

ITALY, September 17, 2020 (LifeSiteNews) — The daily national newspaper of the Italian Catholic Bishops’ Conference has published an article in defense of the recently released Netflix film “Cuties” which shows girls as young as 11 performing sexualized dance acts that critics have described as child pornography and as a promotion of pedophilia.

“There is no explanation for the campaign against Netflix: there is no ‘scandalous sexualisation of teenagers’ as some of the 600,000 signatories of a petition have written,” the byline the article published in Avvenire reads. The article was authored by Andrea Fagioli.

The article contends that those who are objecting to the film “either didn't view it or really limited themselves to the poster.”

“Otherwise they did not understand it or they have watched it through an incorrect viewpoint,” the article continues.

Clips from the film released last week on social media provoked increased outrage online, with many saying the film is promoting pedophilia.

IMDb’s guide for parents for the film has been updated a number of times since the film has been released. Last week, one detail outlined that in one scene “A pair of tight leather pants on an 11 year old girl are forcefully pulled down in the midst of a scuffle; the camera glances at her underwear exposed bum.”

Below is a list of scene descriptions from the film which all currently appear in IMDb’s guide for parents.

When the film was first released, the text which previously appeared on IMDb’s website included the following:

Texas legislator Matt Schaefer has called for an investigation into the film.

Shaefer announced on social media last week that he is asking the state’s Attorney General’s Office to “investigate the Netflix film ‘Cuties’ for possible violations of child exploitation and child pornography laws.”

A number of US politicians have also condemned the film.

Senator Ted Cruz from Texas urged Attorney General Bill Barr in a letter to Attorney General Bill Barr that the Department of Justice must “investigate the production and distribution of this film to determine whether Netflix, its executives, or the individuals involved in the filming and production of ‘Cuties’ violated any federal laws against the production and distribution of child pornography.”

Senator Tom Cotton from Arkansas, in a statement provided to The Daily Caller, said, “There’s no excuse for the sexualization of children, and Netflix’s decision to promote the film ‘Cuties’ is disgusting at best and a serious crime at worst.”

Like Cruz, Cotton urged “the Department of Justice to take action against Netflix for their role in pushing explicit depictions of children into American homes.”

Senator Mike Lee, R-Utah, wrote a separate letter to Netflix. “While I have concerns with the movie’s young actresses’ influence on other young girls, my larger concern is with the possibility that the inappropriate scenes might encourage the sexual exploitation of young girls by adults.”

Robby Starbuck, a director and producer, said, “The whole team behind Cuties needs to be investigated.”

Starbuck highlighted a January interview with Cuties director Maïmouna Doucouré in which she says that “more than 700 young girls” had auditioned for the film, “none of whom had ever done theatre before coming on set.”

“As a director I call [sic] tell you it’s not normal to audition 700 little girls with no acting experience,” Starbuck posted to Twitter. “What were they told to do during auditions? They preyed on inexperienced people starstruck by Hollywood.”

The whole team behind Cuties needs to be investigated. Look what I found. As a director I call tell you it’s not normal to audition 700 little girls with no acting experience. What were they told to do during auditions? They preyed on inexperienced people starstruck by Hollywood. pic.twitter.com/8hXBrVVvE0

Writing last week in an article for LifeSiteNews, Dr. Joseph Shaw, an Oxford University philosophy teacher and father of eight children, argued that the “producers of the series are themselves sexualizing and exploiting the child actors, and serving up their sexualized performances for consumption by male critics like themselves.”

“If there is a power dynamic going on here, the consumers are at the top, Netflix as pimp or enabler is in the middle, and these poor children are at the bottom,” Shaw writes.

“The real story here is not about girls spontaneously organizing a twerking troupe in order to stick to ‘the man’; no, that is a made-up story. What is happening in the real world is ‘the man’ corralling girls into a twerking troupe to tickle the jaded appetites of Netflix subscribers.”

Nevertheless, according to the article in Avvenire the film “does not revolve around a ‘scandalous sexualisation of teenagers’ nor obviously ‘promotes paedophilia’, instead of how some of the more than 600,000 signatories of a petition have written, against the colossus of the distribution of films and TV series through the internet.”

Fagioli claims that “the director absolutely does not force her hand on the sensual aspect at all.”

“[O]n the contrary,” he continues, “she tries to highlight, even if in a contradictable viewpoint, their innocence, the fact that they are children (one is ugly, one is fat, one has pimples…) who do things out of their reach, that they never manage to arrive at the extreme consequences.”

The director of the film, Maimouna Doucouré, says that she was prompted to make the film after attending a local party and seeing “a group of young girls aged around 11 years old, going up on stage and dancing in a very sensual way while wearing very revealing clothes.”

Reflecting on that event in an interview with Cineuropa, Doucouré says: “I was rather shocked and I wondered if they were aware of the image of sexual availability that they were projecting.”

The director says that the film was part of her effort to prompt debate about the growing trend of young girls attracting large numbers of social media followers by posting sexualized photos of themselves online.

“I saw that some very young girls were followed by 400,000 people on social media and I tried to understand why. There were no particular reasons, besides the fact that they had posted sexy or at least revealing pictures: that is what had brought them this ‘fame’,” Doucouré said.

“Today, the sexier and the more objectified a woman is, the more value she has in the eyes of social media. And when you’re 11, you don’t really understand all these mechanisms, but you tend to mimic, to do the same thing as others in order to get a similar result. I think it is urgent that we talk about it, that a debate be had on the subject.”

But Dr. Chad Pecknold, a theology professor at the Catholic University of America and father of a six-year-old daughter, told CNA last month that attempting to start a debate by producing a film sexualising young children “is a rationale that only Jeffrey Epstein could love.”

“I was utterly shocked to see young girls just a bit older than my daughter in sexually suggestive poses,”  Pecknold said.

“But my moral revulsion at what can only be the normalization of pedophilia only increased when I realized the producers claim to be criticizing the sexualization of children by, in fact, sexualizing children.”

Prominent social and political commentator Ben Shapiro has said that he thinks “the actual message of the film is actually quite conservative.”

“I have some complex thoughts about this film ‘Cuties’,” Shapiro says before beginning his analysis of the film.

“Okay so the point of the movie is that France has basically broken down into a society where because of its multicultural ethos it tolerates radical fundamentalist Islam in which people are shipping in second wives from Senegal on the one hand and on the other hand is providing as a lived alternative the secular hedonistic lifestyle that over-sexualizes children and that there's bleed over effect from that sexual, that over-sexualized lifestyle from adults to children,” he said during his show aired last week.

“So that's a pretty conservative message,” he continued. “Like the actual message of the film is actually quite conservative.”

In his Avvenire article, Fagioli even claims that “if it is read correctly and presented well, Mignonnes can become an educational film.”

Catholic priest Fr. John Zuhlsdorf, in a post on his popular blog, says Fagioli’s article is typical of what he says is the frequent demand of liberals “that you deny the facts right in front of your eyes.”

“This is what liberal obsession about understanding ‘nuance’ produces: dung for brains,” Zuhlsdorf writes.

“The Italian Bishops’ newspaper defends “Cuties”. What does that tell you?” Zuhlsdorf concludes.

Avennire is a newspaper of the National Office For Social Communications Of The Italian Episcopal Conference, whose director is named Corrado Dott. Vincenzo.