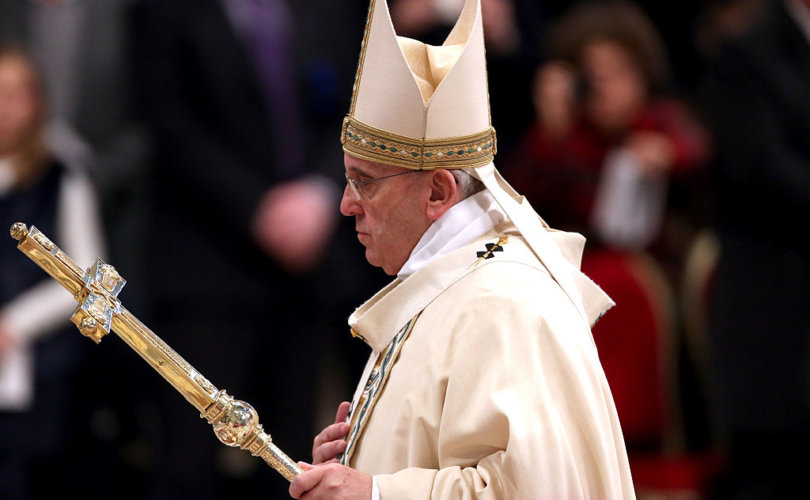 On Friday, August 28, Pope Francis was presented with the new, three year cycle Missal of the Italian Episcopal Conference by its president, Cardinal Gualtiero Bassetti. The new missal will be mandatory for Italian celebrations of the Mass of Paul VI from Easter (April 4) 2021. It will cost €110 ($131 US).

Avvenire confirmed that the new translation includes Francis’s changes to the Lord’s Prayer, made last year, and a change to the Gloria.  The first of the Pontiff’s change to the Lord’s Prayer is the word “anche” (also) inserted into the line about our forgiveness of others, i.e. “come [anche] noi li rimettiamo ai debiti” (as we forgive our debtors). The second is the retranslation of Greek “kai mē eisenenkēis hēmas eis peirasmon” (“lead us not into temptation”) into the Italian “non abbandonarci alla tentazione” (“abandon us not into temptation”).

In a December 2017 interview on the Italian Bishops’ official television network, Pope Francis said that the then-current Italian translation “non ci indurre in tentazione” (“lead us not into temptation”) was “not good” and should be changed.

The pontiff said that he did not like the traditional translation because “it’s not [God] who throws me into temptation, in order to then see how I’ve fallen. No, a father doesn’t do this … The one who leads us into temptation is Satan. That’s Satan’s task,” he said.

Pope Francis observed that the Church in France had already changed their traditional translation of the prayer.

Other changes to the Italian Missal are expected but not as yet confirmed.

“Is it really more comforting to know that the Lord cannot lead up into temptation, but can abandon us in it?” he asked.

When the Italian bishops first approved the new missal, Di Pippo wrote that the hitherto current Italian Lord’s Prayer had been used for hundreds of years, that every Italian, churched or unchurched, knew it, and that there was no pastoral reason to change it. The linguist also took issue with the translation’s lack of authenticity.

“The Greek verb in question “eisenenkēis” does not mean ‘abandon,’ he wrote.

“It is a form of a highly irregular verb “eispherō – to bring in, lead in, carry in, introduce,” he continued.

“No dictionary lists ‘abandon’ or any synonym thereof as a translation. It is as if Christians have not been praying ‘lead us not into temptation’ in countless languages for over 19 centuries, as if no one has ever bothered to consider what these words mean, and comment on them.”

St. Thomas Aquinas was one of the many theologians who pondered “lead us not into temptation.” In his Summa Theologiae he wrote that in the Lord’s Prayer we do not ask not to be tempted at all but not to be conquered by temptation:

We are directed to beatitude accidentally by the removal of obstacles. Now there are three obstacles to our attainment of beatitude. First, there is sin, which directly excludes a man from the kingdom, according to 1 Corinthians 6:9-10, “Neither fornicators, nor idolaters, etc., shall possess the kingdom of God“; and to this refer the words, “Forgive us our trespasses.” Secondly, there is temptation which hinders us from keeping God's will, and to this we refer when we say: “And lead us not into temptation,” whereby we do not ask not to be tempted, but not to be conquered by temptation, which is to be led into temptation. Thirdly, there is the present penal state which is a kind of obstacle to a sufficiency of life, and to this we refer in the words, “Deliver us from evil” (ST, IIa IIae, 83.9).

Scholar Anthony Esolen weighed in shortly after Pope Francis’ interview to point out that Jesus’ wording of His prayer, transmitted through the Gospels, is canonical.

“I believe that the Greek means what it means, and what it means is accurately rendered as ‘lead us not into temptation,’ exactly the same in Matthew as it is in Luke,” Esolen wrote in First Things.

Esolen believes, however, that we are literally asking to not be tempted, even though temptations will certainly come. He believes we should embrace the strangeness of Jesus’s words

“The words of Jesus, as words, are clear,” he wrote.

“Their implications are profound. They are hard for us to fathom. They strike us as strange. That is as it should be. Let them stand.”

Di Pippo found the change to the translation of the fourth century Latin Gloria in excelsis even “more grotesque and unjustifiable.”

“I hazard a guess, and no more than that, as to the rationale behind this,” he wrote.

“To speak of ‘men of good will’ implies that there are men who are not of good will, one of the most basic facts about human existence, and one which the Church has for over half a century wasted enormous time and effort on denying.”

“The new reading permits the insertion of a comma, turning the phrase “loved by the Lord” into a nonrestrictive adjectival phrase, (“men, who are loved by the Lord”), in a way that cannot be done by translating the actual text.”

Philosopher and author Dr. Peter Kwasniewski told LifeSiteNews that the re-translation of the Italian Missal was a useless exercise.

“To use a hackneyed but terribly accurate saying, it's just more rearranging of deckchairs on the Titanic,” Kwasniewski said via social media.

“Church attendance is already plummeting catastrophically throughout Europe; the COVID shutdown will accelerate the process; the liturgy is already in shambles; and the Italian bishops think it's a great idea to monkey with liturgical texts, moving them away from what the original Greek and Latin say, to something idiosyncratic?” he continued.

“Leave it to the bishops to redefine parody.”

Kwasniewski also said that Pope Francis’ “misinterpretation and mistranslation” has already been “thoroughly critiqued, but truth never mattered much to liturgical reformers.”