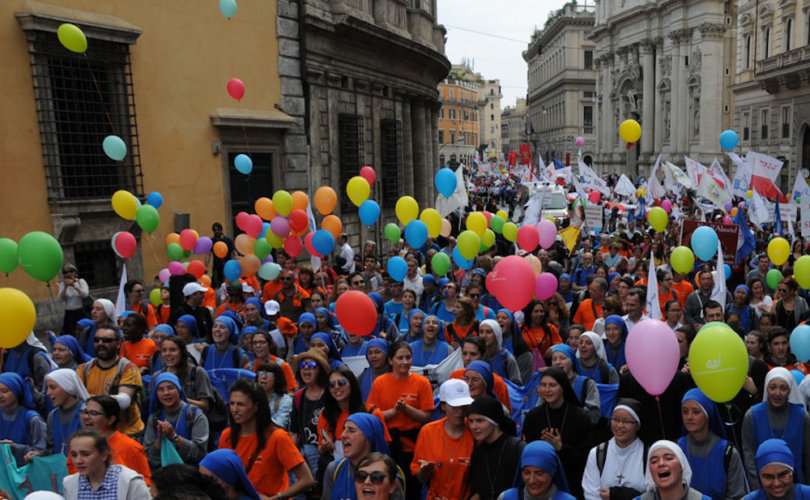 The Italian Bishops Conference did not participate as a group in recent pro-life marches.RallyforLife.net

ITALY, October 26, 2016 (LifeSiteNews) — The Italian bishops have decided to take part in the March for Amnesty, Justice and Freedom organized by the anti-Church Transnational, Non-violent Radical Party of Italy.

The Bishops Conference of Italy (CEI) confirmed its participation in the fourth annual march in support of amnesty, justice and liberty, named after Marco Pannella and Pope Francis. The march will take place November 6 in Rome on the occasion of the jubilee of prisoners and will lead to St. Peter’s Square.

The bishops’ participation in the radicals’ march comes as a surprise because the CEI did not take part in the recent pro-life demonstrations in Rome, although individual bishops did show up on their own initiative. A “Family Day” rally was completely snubbed by the CEI.

The March for Amnesty on November 6 will end in a call for prisoner amnesty and coincide with the Jubilee of Mercy for prisoners that day.

Father Ivan Maffeis, spokesman of the Italian bishops conference, explained that Bishop Nunzio Galantino gives his “steadfast commitment” to the march, as the bishops see it as an opportunity to “raise awareness” in the political world, as the National Catholic Register reports. The protest will coincide with a hunger strike on November 5-6 in which 720 inmates in Italian prisons will demand reform and a promised re-education program that hitherto has not come to fruition.

A press statement on the website of the Radical Party affirmed the CEI’s decision and stated that the president of the CEI, Angelo Bagnasco, shares the initiative. The march is also supported by the Community Sant’Egidio.

The Radical Transnational Party was founded in 1956 by Marco Pannella and understands their own mission as a fight for human rights and liberty. The party is active in numerous causes, among them the abolition of the death penalty, a strong secularity of civil society. Among its members are the Italian Radical party, which coins itself libertarian, and the Radical Association of Certain Rights, which is lobbying for transsexual and gay rights.