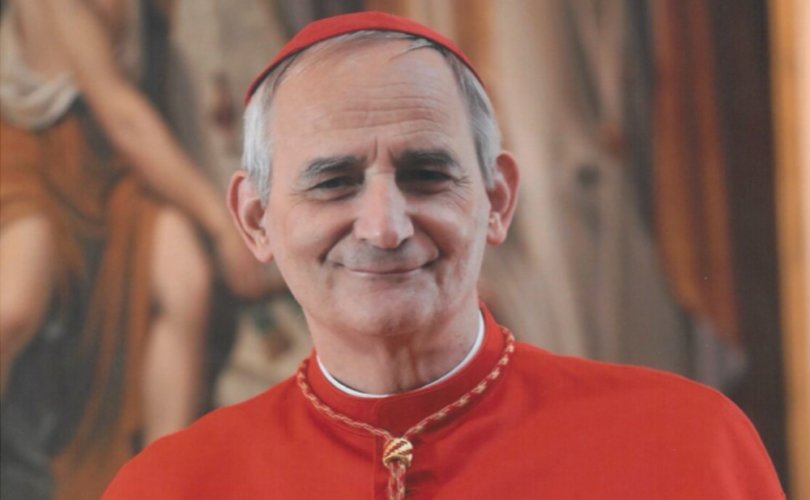 BOLOGNA, Italy (LifeSiteNews) — The President of the Italian Bishops’ Conference, Cardinal Matteo Zuppi, has been accused of attempting to cover up a Mass celebrated to honor and bless two homosexual men who obtained a civil union in Italy earlier this month.

On June 11, Fr. Gabriele Davalli, a priest of the Bologna archdiocese, celebrated a “Mass of Thanksgiving” for a same-sex couple, Pietro Morotti and Giacomo Spagnoli, who had just obtained a civil union license the same day. According to the Daily Compass, the Mass intentionally included “all the typical paraphernalia of weddings.”

“Once in the church a second ceremony, a Mass, began for Pietro and Giacomo, their parents, relatives, and friends, after the ‘yes’ that had just been pronounced in front of the official audience,” the report stated. “A Mass in which the two – declared homosexuals – were also celebrated by the Church. There was all the typical paraphernalia of weddings: the flowers, the formal suits, the songs, the photographer and the two ‘newlyweds’, protagonists of the celebration, in the front row.”

The Daily Compass says that “in order not to make it look like an open violation of the laws of the Church”, rather than host a a formal blessing ceremony “the priests invented the idea of a Mass of Thanksgiving.”

The Archdiocese of Bologna, under Cardinal Zuppi, has since issued a statement on the event in which they denied what was apparently clear to those present, namely, that it was a special Mass for the homosexual couple, equivalent to an ecclesiastical blessing.

— Article continues below Petition —
Pope Francis: Don't make Bishop McElroy a cardinal - he knew about McCarrick
Show Petition Text
12643 have signed the petition.
Let's get to 15000!
Thank you for signing this petition!
Add your signature:
Show Petition Text

The statement read, “In reference to the Mass celebrated last June 11 in the parish of S. Lorenzo di Budrio, in the Diocese of Bologna, with the presence of a same-sex couple, so as not to give rise to misleading interpretations, it is clarified that there was no blessing of the couple.”

The pastor of the parish of S. Lorenzo, however, understood the Mass differently. According to Breibart News, the pastor, Father Antonio Bai, said, “It was a blessing of two men just civilly united… A blessing is not denied to anyone, right?”

La Nuova Bussola Quotidiana (The Daily Compass) has accused Cardinal Zuppi of lying about the nature of the Mass that was celebrated, saying “It was an ad hoc mass for the two of them.” In support of the claim, they provided the contents of the WhatsApp invitation of Pietro to his friends for the event:

On Saturday 11 June 2022, barring unforeseen circumstances, Giacomo and I will be civilly united at Budrio Town Hall. Immediately afterwards, in the church opposite, we will celebrate a mass of thanksgiving/entrustment for our life together

The archdiocese claimed that the Mass was celebrated instead for the group “In cammino”, and that the group had been there for 30 years.

“It was a Mass of Thanksgiving for the ‘In cammino’ group, present in the diocese for thirty years, which aims to accompany and support in the Christian life even people with homosexual tendencies.”

However, it is clear that both the priests and the same-sex couple understood the Mass to be more than something offered generically for “In cammino.” The diocese also passed over in silence the fact that the group was not allowed by Zuppi’s predecessors to operate openly, only becoming a diocesan ministry when Cardinal Zuppi came to Bologna.

Davalli, the celebrant, told La Nuova Bussola Quotidiana that Cardinal Zuppi was aware of the June 11 ceremony. He had “informed him myself.”

Zuppi’s support of the LGBTQ lifestyles and agenda was noted when in 2018 he wrote a preface to Father James Martin’s book Building a Bridge. According to the National Catholic Register, the book was “criticized for its failure to stress the importance of celibacy and chastity, and to acknowledge same-sex attracted Catholics trying to live in obedience to Church teaching.”

Again in 2020, Zuppi wrote another preface to a similar book titled The Church and Homosexuality, edited by Luciano Moia, a book advocating a “new attitude of pastoral responsibility” concerning homosexuality.

LifeSiteNews has contacted the Archdiocese of Bologna for comment, but is yet to receive a response.