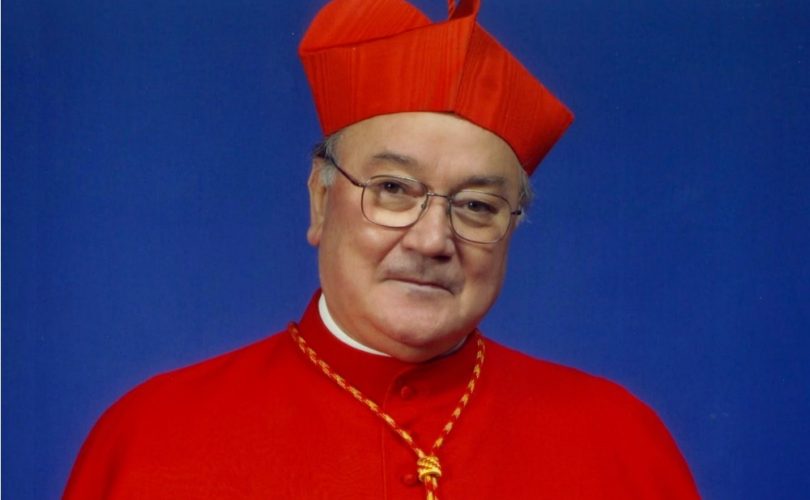 December 19, 2016 (LifeSiteNews) – In a new interview, Italian Cardinal Renato Raffaele Martino defended the dubia four of his fellow cardinals sent to Pope Francis asking for clarification about whether Amoris Laetitia is aligned with Catholic moral teaching.

Speaking to La Fede Quotidiana, Martino, who is the former head of the Pontifical Council for Justice and Peace, said that he sees nothing bad about the dubia and that it is “legitimate” to ask the pope these sorts of questions.

When Martino was asked about the dubia, he said, “I do not see anything bad here. It is legitimate in terms of doctrine to turn to the pope and express an opinion – and it is also just that he would respond.”

He also defended the unchanging nature of doctrine about the indissolubility of marriage, explaining, “The doctrine has not been changed and cannot change. The Sacrament of Matrimony is indissoluble.” He said cohabitation and divorce and remarriage are not the same as sacramental marriage.

Futhermore, “the case-by-case approach mentioned in Amoris Laetitia can lend itself to dubious interpretations,” said Martino.

Some dioceses have embraced the “case-by-case approach” the controversial exhortation seemingly approves in Footnote 351. Such an approach allows for those living in states the Church teaches are objectively sinful to sometimes receive the Sacraments–without a firm purpose of amendment, or desire to correct and cease the sinful behavior.

Other dioceses have issued guidelines for implementing Amoris Laetitia that reaffirm the Church's teaching and ensuing practice on marriage, conscience, sexual sin, and Holy Communion.

This led 45 theologians to ask the college of cardinals to petition the pope to rebuke errant interpretations of Amoris Laetitia.

Then, Cardinals Raymond Burke, Walter Brandmüller, Joachim Meisner and Carlo Caffarra sent Pope Francis a dubia, or formal request, asking him to clarify that Amoris Laetitia doesn't go against Church teaching. When he didn't respond, the cardinals went public with their concerns. Pope Francis has yet to respond. Twenty-three pastors and scholars have expressed their support of the dubia in a joint letter, and two famous moral theologians asked Pope Francis to renounce “misuses” of the exhortation.

Although Pope Francis hasn't publicly responded to such concerns and requests, he sent the bishops of Buenos Aires a letter approving their implementation of Amoris Laetitia, which allows the divorced and remarried to receive the Holy Communion in some circumstances. The Vatican confirmed the letter as authentic.

Papal confidante Father Anthony Spadaro suggested in a recent interview that the pope's response to the dubia can be found in the Buenos Aires letter. Burke responded to that claim in an EWTN interview Thursday, saying, “It is the role of the pope as the pastor of the universal Church, as the guardian of the unity of the bishops and of the whole Body of Christ, to respond to such questions.”

The pope has “given his own opinion” on Communion for the divorced and remarried, but “the question can only be answered in terms of what the Church has always taught and practiced,” the cardinal said. “It’s not a matter of…some speculative idea I may have about how to approach these questions, but how does Christ in His Church address such questions? …until that answer is provided, we remain in a confused state.”

Other prelates, like Bishop Athanasius Schneider, Cardinal Paul Josef Cordes, and Bishop Józef Wróbel, have expressed their support of the cardinals seeking clarity.