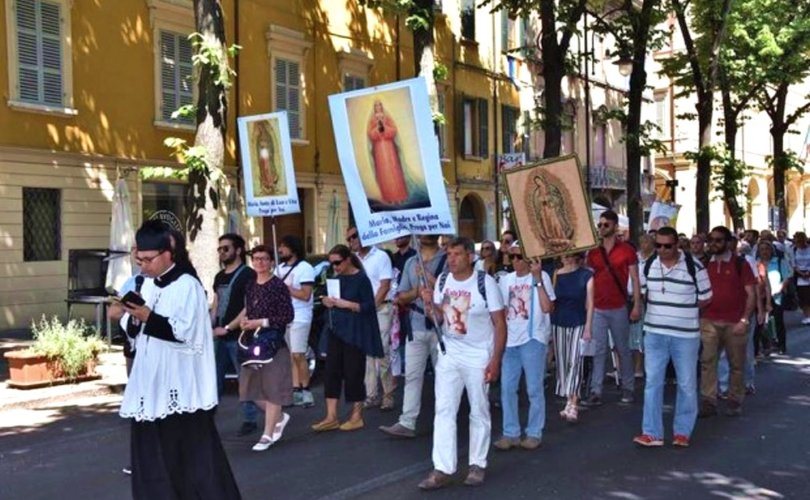 REGGIO EMILIA, Italy, June 14, 2017 (LifeSiteNews) — About 300 Catholics marched in reparation for what they called the “public sin” of a Gay Pride parade that took place in their northern Italian town.

“Our march is not a protest against Gay Pride, but a prayer that does penance for public sin,” Don Luigi Moncalero, a Catholic priest, told Italian journalists.

“From the moral point of view, homosexuality is a disorder strongly deplored by Sacred Scripture. Celebrating homosexuality means not only contradicting the Bible that says, ‘Male and female God created them,’ but it reverses the natural order,” he added.

The march of reparation, which took place earlier this month, was headed by five priests who wore traditional clerical dress as they led the faithful in Latin-language rosaries and other prayers. Among the penitents were representatives from pro-life-and-family associations.

The June 3rd march began at 10:30 AM and lasted an hour. A police presence at the event guarded participants from potential LGBT harassment.

The event was sponsored by the Blessed Giovanna Scopelli society.  The Society describes itself as a “without-any-other-adjectives Catholic society.” Its sole purpose is to make reparation for sin. The Society says it is “animated not by the opinions or the sensibility of its members but by the unmistakable teaching of the Church.”

The march was not supported by local clergy or the bishop of Reggio, Massimo Camisascra.

Gabriele Colosimo of Radio Spada told reporters that the march had gone well, regardless of its numbers, because it had achieved its objective of “reparation for the scandal of gay pride.”

“Those who have homosexual tendencies are welcomed by the Church,” he said, “but they must not practice sodomy. That is a real sin.”