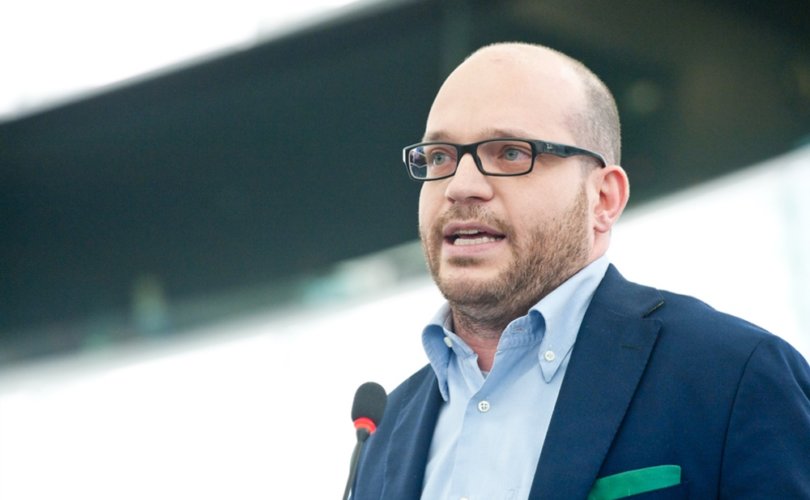 ROME, May 31, 2019 (LifeSiteNews) — Italy’s Minister for the Family has openly endorsed a “Procession of Reparation to the Sacred Heart” being held in the northern Italian city of Modena on Saturday, June 1. The aim of the procession is to atone for a “gay pride” event being held in the city the same day.

Asked about the event in a recent video interview, Lorenzo Fontana, Minister for the Family and vice-secretary for Italy’s Northern League party, said he “absolutely agrees” with the procession.

“I am happy that you all are doing this, and I wish you good luck,” Fontana told organizers. “Let’s hope that no one thinks he can prevent a public demonstration, which is democratic. I hope that you will be able to do your best, because certain Christian values are the foundation of our history, our identity and our tradition, and we need to uphold them.”

LifeSite spoke to one of the key organizers, Cristiano Lugli, ahead of the procession. Lugli, a young layman, talked about the importance of this public act of reparation, particularly in light of the “LGBT” lobby’s tightening grip on Italian school children through the promotion of gender theory in the classroom.

Lugli also discussed the need for the Vatican to speak out. “The Holy See sometimes speaks against gender theory,” he said, “but then it receives ‘LGBT’ activists. This is a very serious matter.”

He said that he and other organizers have received “every kind of insult” and “even death threats” for organizing the procession.

“We are not surprised by the gays or atheists who insult us,” he noted, “but by those ‘Catholics’ who tell us that we will burn in hell for having organized a reparation procession.”

Many people, he said, have even invoked Pope Francis’s words to criticize the procession, telling organizers: “Who are you to judge?”

“Unfortunately,” Lugli said, “the Church of Rome also has a great responsibility, since it has stopped teaching the Catechism and opened itself to the ideas of the world for fear of being judged. But it is the Church that has always judged the world, not vice versa.”

“If the Church no longer stands as the guardian of the one Truth who is Jesus Christ, then everything becomes relative.”

Here below is our interview with Cristiano Lugli on the Procession of Reparation.

LifeSite: Cristiano, tell us about the Procession of Reparation.

Lugli: The public procession of reparation will be held in Modena on Saturday morning, June 1, at 10:00. It has been organized by the Committee of Saint Geminiano, a group of Catholic faithful from Modena and Reggio-Emilia who place themselves under the protection of the city’s patron saint: the fourth century bishop of Modena, San Geminiano.

The Procession of Reparation is being held on the same day as a “gay pride” event in Modena.

We believe that “gay-pride” is a very serious act against God, against Our Lady and against the Saints, because it tends to subvert the natural order willed by God himself. It is a public sin against nature, and the Magisterium of the Church teaches that a public and manifest sin must be met with a public act of reparation. This is the purpose of the procession.

The gay pride movement and “gender theory” have taken stronger hold in Italy, haven’t they?

Unfortunately, yes. “Gay pride” events have been organized to take place all over Italy early this summer. The “LGBT” lobby in Italy, as in the rest of the world, is very powerful. The “gay pride” march being held in Modena, for example, is being sponsored by the city: this means that it is also paid for with our taxes. This is absurd!

“Gender theory” is now widespread throughout the Italian school system, with children being exposed to it at a very young age. In recent years, a left-wing government introduced Law 107 (also known as “Good School” Law) insidiously injecting gender theory into academic curricula. There are also many “LGBT” associations that have gained ground in the schools through projects passed off as “sex education.”

Have similar acts of reparation been organized in the past, in Modena or in other cities?

Yes. Modena’s procession is the 4th great act of reparation since 2017. The first was held in Reggio Emilia and two others took place in Rimini. Other small acts of reparation for “gay-pride” events have been held in other cities as well.

I understand this procession has the support of the local archbishop of Modena, His Excellency Erio Castelluci. As far as you know, have local bishops shown support for processions of reparation in the past?

In the case of the Reggio-Emilia and Rimini processions, the local bishops were substantially opposed to such acts of reparation. In the case of Modena, the Archbishop received us in a private audience and, although he specified that the initiative is not strictly speaking being organized by the diocese, he has nothing against the fact that this procession is taking place, and he shares our motivations for holding it. I believe he also lent support because the organizers of the “LGBT pride” event used a symbol of the Cathedral of Modena to create their logo: a truly blasphemous act, and I do not think the bishop liked it at all.

The “LGBT” group also committed another blasphemous act by photographing two young women kissing beneath the photo of our poster of the Sacred Heart.

In today’s secular and ecclesial climate, it can be risky for a bishop to show such support. Were you surprised?

In fact, it is somewhat surprising that the archbishop of Modena has taken this position, but I also believe that his stance is very valuable. A bishop is called to be a shepherd who is willing to defend the sheep and the Church in all things. But in times like these, we must also be content with those small gestures that give us hope…

You spoke about how “gender theory” has made its way into Italian schools. Italian children and adolescents are therefore at stake. Would you like Pope Francis, the Holy See and the Italian bishops to do more to fight gender theory?

Absolutely. The problem is that, so far, little has been done. Indeed, in Modena, in a “Catholic” school called “Scuola Madonna Pellegrina,” [School of Our Lady the Pilgrim] parents discovered that teachers had spoken to the children about gender theory. They started a collection of signatures to report everything to the bishop, but the bishop effectively denied that the problem existed. The Holy See sometimes speaks against gender theory, but then receives “LGBT” activists. This is a very serious matter.

Italy is a traditionally Catholic country, but secularism has taken hold to a large extent. How have Italians generally responded to the idea of a procession of reparation?

We have received insults of every kind, even death threats. Italy’s problem was the Christian democracy party, which governed for many years and turned Catholics into cowards. These “democratic Catholics” are democratic even when it comes to the Gospel. They profess to be Christians, but when you tell them, for instance, that God created marriage to be between one man and one woman, they say times have changed and the most important thing is to give the same rights to all.

Therefore, we are not surprised by the gays or atheists who insult us, but by those “Catholics” who tell us that we will burn in hell for having organized a reparation procession. They say, “Jesus loves everything and everyone.” Unfortunately, the Church of Rome also has a great responsibility, since it has stopped teaching the Catechism and opened itself to the ideas of the world for fear of being judged. But it is the Church that has always judged the world, not vice versa.

If the Church no longer stands as the guardian of the one Truth who is Jesus Christ, then everything becomes relative. Many people, in fact, use the words of Pope Francis and say: “Who are you to judge?” Unfortunately, there is also a lot of confusion on the subject of homosexuality.

Have you received any other notable support? And do you have any new hopes after the recent European elections?

The Saint Geminiano Committee has received the extremely important support of Italy’s Minister for the Family, Lorenzo Fontana. He is one of the few Catholic ministers. We interviewed him during a recent visit to Modena, and he absolutely agrees with our procession and supports it. Minister Fontana added that, contrary to what some people believe, it is important publicly to display Christian symbols, which he said are at the “foundation” of “our identity” and “our tradition.”

Although the sovereign front in Europe is still rather weak, even following the European elections, we hope that something will change. Particularly in Italy, it is important that political forces such as Matteo Salvini’s and Lorenzo Fontana’s League Party finds the strength to fight especially murderous laws uch as the legalization of abortion. They also will need to forcefully oppose the “LGBT” lobbies that aim to destroy the natural law and the purity and innocence of children. We’ll see, but in the meantime we trust in Divine Providence which will surely assist us on Saturday during the procession of reparation in Modena.