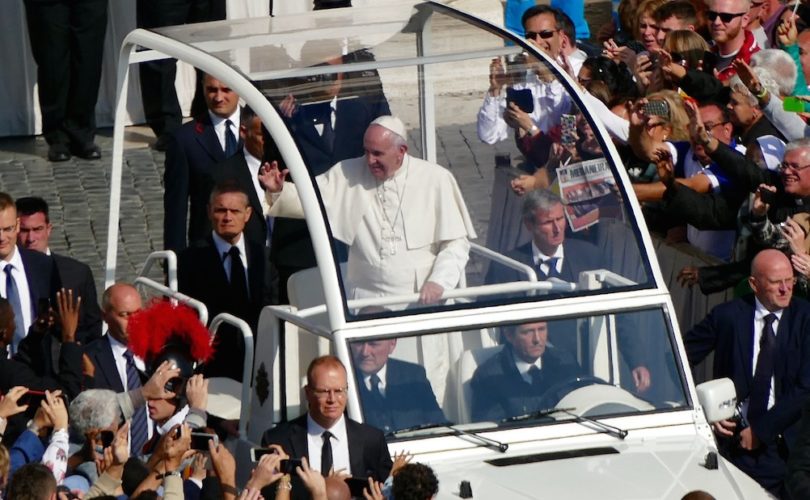 ROME, November 2, 2015 (LifeSiteNews) — Italian atheist Eugenio Scalfari has released yet another bombshell interview with Pope Francis, and this time he is claiming the pope told him that “all the divorced who ask will be admitted [to Communion].”

When asked about the conclusions the recent Synod on the Family had reached, the pope allegedly told Scalfari that the family “changes continuously” and the way it is conceived in modern society “contains some positive aspects, and some negative ones.” He then went on to speak about the situation of the divorced and remarried receiving Communion.

“For that which regards the admission of the divorced to the Sacraments, [the diverse opinion of the bishops] confirms that this principle has been accepted by the Synod. This is bottom line result, the de facto appraisals are entrusted to the confessors, but at the end of faster or slower paths, all the divorced who ask will be admitted,” he said in the Sunday edition of La Repubblica, according to a translation by Rorate Caeli.

“Obviously the report of Mr Scalfari is not correct,” he told LifeSiteNews today. “As it already happened in the past, Scalfari attributes sometimes to the Pope precise words, with quotation marks, that the Pope has never pronounced, but are only his interpretation. He has publicly declared that he has never recorded the words of the persons that he has interviewed, and this is well known by the Italian press… Therefore the words of the article of Scalfari absolutely cannot be considered as the mind of the Pope.”

Given the Vatican press office’s ongoing claims that Scalfari’s stories on the pope are inaccurate, many Catholics are asking why the pope continues to give him interviews. The National Catholic Register's Edward Pentin, for example, asks: “Why does the Pope continue to speak to someone such as Scalfari, and discuss such sensitive subjects with him, when he knows he is unreliable but likely to report his words without reference to a recording or transcript?”

The Rorate Caeli blog goes further, however. They argue that the pope’s continued relationship with Scalfari, and the fact that the Vatican has actually published previous papal interviews, lends credence to the accuracy of the Italian journalist's latest report.

In a September 2013 article, Scalfari reported that Pope Francis told him that youth unemployment and loneliness among the elderly are the “most urgent” problems facing the Church, and the “most serious of the evils that afflict the world these days.” The claim perplexed and alarmed many observers given the gravity of issues facing modern society, including the loss of faith, the widespread slaughter of the unborn, the destruction of the natural family, and the martyrdom of Christians by Islamic extremists.

The Vatican eventually pulled the interview from its website, but only after Scalfari received widespread criticism for admitting he did not use a recorder or take notes and that his writings were reconstructions from memory. The Vatican never offered clarification on the controversial remarks attributed to the Pope. Instead, Vatican spokesman Fr. Lombardi said at the time: “One may consider the interview to be reliable in a general sense but not word for word. This is not an official text of the Holy Father.”

Despite this, the Vatican Publishing House published a book in 2013 called Interviews and Conversations with Journalists that included what it called the “recognized interviews” with Pope Francis. The pope is listed as the author of the book. Included in the book was the September 2013 interview with Scalfari.

In a March 2015 interview, the pope was quoted by Scalfari as denying the existence of hell. “There is no punishment, but the annihilation of that soul. All the others will participate in the beatitude of living in the presence of the Father. The souls that are annihilated will not take part in that banquet; with the death of the body their journey is finished,” the Pope allegedly said at that time.

As in the previous case, the Vatican downplayed the interview. Fr. Thomas Rosica, English-language assistant to the Holy See Press Office, said the remarks “should not be considered official texts” since Scalfari “reconstructed the interviews from memory.”

The Synod on the Family’s final report was supported by leading opponents of Kasper’s Communion proposal, such as Cardinal George Pell, but it also pleased progressives who believe it allows an opening.

Some critics argued that the final report contained a number of “time-bombs” that could be exploited in the future to undermine Catholic teaching on marriage, divorce, adultery, and reception of Holy Communion while living in an objectively sinful state.

Cardinal Raymond Burke was among them, saying it was misleading and lacked clarity on the indissolubility of marriage. Noting the report’s call for the “integration” of the divorced and remarried, Burke said that “integration” is a “mundane term which is theologically ambiguous.”

“I do not see how it can be ‘the key of pastoral accompaniment of those in irregular matrimonial unions.’ The interpretative key of their pastoral care must be the communion founded on the truth of marriage in Christ which must be honored and practiced, even if one of the parties of the marriage has been abandoned through the sin of the other party,” he said in an interview after the Synod’s final document had been released.

At a press conference on the day the final report was approved, leading progressive Cardinal Reinhard Marx, archbishop of Munich, stated: “I am very happy that we made a step ahead. … There have been doors opened, especially for people in difficult situations. … I am very, very happy.”

Also on the same day, Cardinal Kasper stated, “I’m satisfied; the door has been opened to the possibility of the divorced and remarried being granted Communion.”

The sixth commandment given to Moses in the Old Testament, and later affirmed by Christ in the New Testament, states: “You shall not commit adultery.”

The Catholic Church teaches that adultery is an objective mortal sin which has the effect of cutting off the individual who commits this sin from the sanctifying grace of God. The Church also teaches that those in a state of mortal sin must not present themselves for Holy Communion, since this would add the further sin of sacrilege by receiving Jesus unworthily.