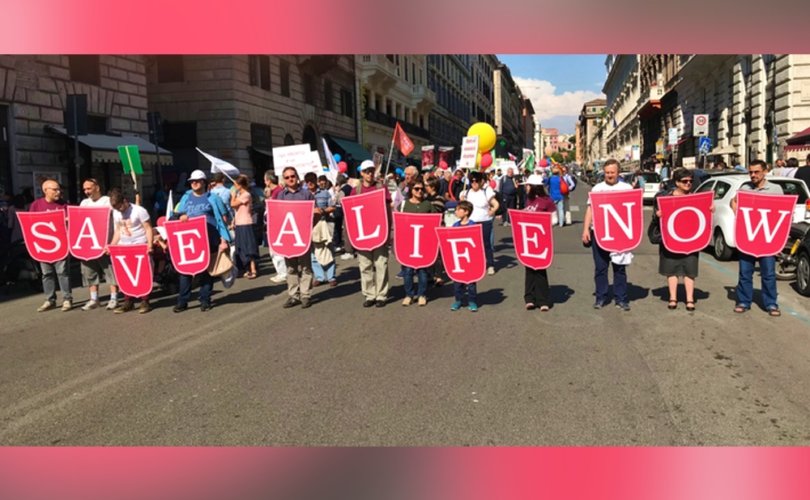 The Rome March for Life remembered UK toddler Alfie Evans by switching the letters of his first name to spell "A Life." Rome, May 19, 2018. Steve Jalsevac / LifeSiteNews

ROME, May 22, 2018 (LifeSiteNews) – Thousands of people participated in Rome’s March for Life Saturday, filling the streets of the ancient city with music, dancing, and prayer. The annual event was organized by March for Life President Virginia Coda Nunziante and her team of volunteers.  Along the cobblestone streets and amid buildings and structures thousands of years old, young and old marched to reject abortion without compromise. LifeSiteNews was on hand to livestream much of the event on FaceBook.

The Rome March for Life, the most important pro-life event in the nation, was a great success despite a weather forecast which threatened rain. In addition to countless young people, there were numerous priests, religious, and seminarians who joined Vatican Cardinal Raymond Burke, former US nuncio Archbishop Carlo Vigano and Archbishop emeritus of Ferrara-Comacchio Luigi Negri for the march.

Over 100 pro-life leaders from around the world gathered for the annual Rome Life Forum organized by Voice of the Family were also on hand to lead the march.

The banner of the March carried by enthusiastic young people was immediately followed by nearly 15 local mayors who wore a three colored sash. Several politicians were also present

The march was distinguished this year by many signs held up to remember baby Alfie Evans – the two-year-old in England who was granted Italian citizenship so as to allow his parents to provide him with alternative medical care offered in Italy but refused by the British authorities. The Rome march is also unique for its “Train of Life” which is a vehicle made to look like a train which drives along the route with many children, babies and mothers allowing participation which might otherwise be too burdensome.

As the march ended its journey in the historic Piazza Venezia, the marchers gathered around a large stage, to listen to testimonies beginning with Janet Morana of Silent No More, an organization of women who have had abortions and warn of the devastation abortion causes. Although from America, Morana spoke in Italian to the delight of the crowd.

Margherita, a young Neapolitan woman, mother of two children, recounted how she was convinced last January to abort her third child, because her baby had Downs. Today, thanks to the help of her parish priest, she has transformed her pain and remorse for her abortion into a determination to fight abortion so that other women will not make the same mistake she made.

Federica, a Roman girl with Downs, touched many hearts as she explained how her life is happy, beautiful and how grateful she is to be alive.  She was affirmed in the love she felt by the cheering of the crowd.

Viviane Lambert, the mother of Vincent Lambert a 41-year-old man in France threatened with euthanasia by withdrawal of nutrition and hydration also spoke.

March for Life President Virginia Coda Nunziante, noted that the day commemorated the 40th year of the legalization. “There is a book of life and there is a book of death. In this book of death, the date of May 22, 1978 is written in letters of blood, the blood of nearly 6 million victims,” she said.

Finally, a human banner of young people spelling out the name of Alfie Evans came on stage and launched hundreds of balloons into the sky as a tribute to the little soldier for life who according to his father Tom fought valiantly.