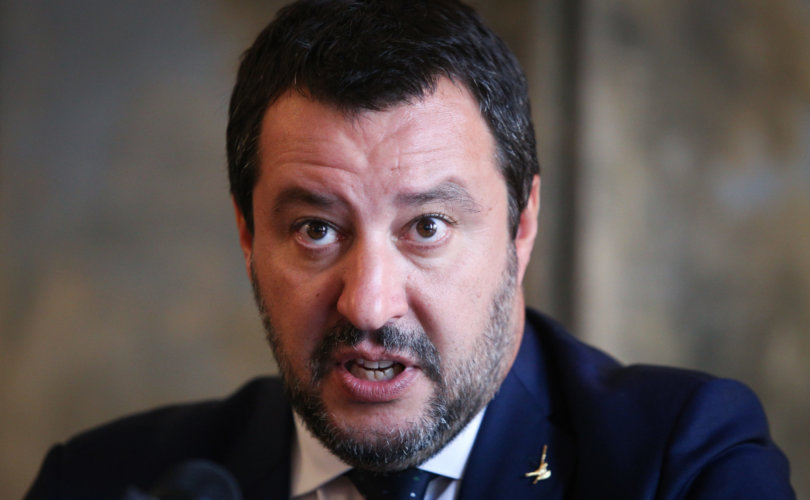 In an interview on Italian national television, he said he supported the request made by many Italians to have small groups enter churches for Mass “in an orderly, composed, and sanitary way.”

“We are approaching Easter, and we also need the protection of the Immaculate Heart of Mary,” said Salvini, who served as Italy’s deputy prime minister in 2018 and 2019.

“I can’t wait for science – and also the good God, because science alone is not enough – to defeat this monster so we can go out again,” he explained, according to a transcript provided by La Repubblica. “Holy Easter, the resurrection of our Lord Jesus Christ, can be a moment of hope to live for millions of Italians.”

On March 19, Catholics in Italy had issued an Appeal for the Holy Mass, asking “for the recognition of the personal need of every member of the Catholic faithful to participate in the Holy Mass so that each person can actively worship while respecting the current legislation.”

“Therefore, we urgently ask of the competent authorities, both ecclesiastical and civil, to resume liturgical celebrations with the participation of the faithful, especially Holy Mass on weekdays and on Sundays, adopting the provisions appropriate to the directives for the COVID-19 health emergency,” the appeal continued.

Virginia Coda Nunziante, the main organizer of the March for Life in Rome, told LifeSiteNews that “it will be the first time in history with no Easter Triduum. Not even during the last world wars (were) religious celebrations abolished.”

Even during war time, she explained, “all churches were open and pastors encouraged people to pray, to increase devotion to Our Lady, to the Sacred Heart, to all saints, to the angels.”

She encouraged that “all efforts should be made to ensure the sacraments of penance and the Eucharist” are available. Every faithful “has the right to receive and every priest has the duty to give” these sacraments.

Catholics in the United States had created a similar initiative, urging bishops “to do everything you can to make the sacraments more available to us” during the COVID-19 pandemic. The open letter, titled “We Are An Easter People,” was released April 1.

“Something is terribly wrong with a culture that allows abortion clinics and liquor stores to remain open but shuts down places of worship,” the open letter pointed out. “While safety and cooperation with civil authorities is necessary, we must do everything we can to have access to what is essential for our spiritual lives.”

LifeSiteNews collaborated with “We Are An Easter People” by launching an “urgent appeal to bishops” on the LifePetitions platform. Both appeals have been signed by about 12,000 people at the time of this writing.

However, not everybody is happy with lay Catholics taking the initiative and demanding access to the sacraments, especially Holy Mass, which the Second Vatican Council called “the source and summit of the Christian life.”

Cardinal Matteo Zuppi, the archbishop of Bologna, Italy, called Salvini’s proposal “dangerous,” arguing that “rules must be obeyed and so the Church must do so also.”

“We bishops were hoping that the Easter celebrations would coincide with the end of the emergency, but unfortunately this is not the case,” the cardinal said.

In 2018, Zuppi contributed an essay to the Italian translation of pro-homosexual Jesuit Fr. James Martin’s book Building a Bridge. He endorsed it as “useful for encouraging dialogue, as well as reciprocal knowledge and understanding, in view of a new pastoral attitude that we must seek together with our LGBT brothers and sisters.”

Meanwhile, Cardinal Raymond Burke had on March 21 called for churches to be open.

“Just as we are able to purchase food and medicine, while taking care not to spread the coronavirus in the process, so also we must be able to pray in our churches and chapels, receive the sacraments, and engage in acts of public prayer and devotion, so that we know God’s closeness to us and remain close to Him, fittingly calling upon His help,” the cardinal wrote.

“Without the help of God, we are indeed lost,” he warned.

Archbishop Carlo Maria Viganò said in an interview that just as governments “have the right to pass measures for things affecting our bodies, so the Church authorities have the right and the duty to worry about the health of our souls. They cannot deny the faithful the spiritual sustenance they receive from the Eucharist, not to mention the Sacrament of Confession, Mass, and Viaticum.”

“When so many shops and restaurants were still open, the various bishops’ conferences had already suspended all sacred functions, even when the civil authorities had not asked them to do so,” the former Apostolic Nuncio to the United States pointed out.

“This is further proof that the hierarchy is in a dreadful state and shows that bishops are all too willing to sacrifice the well-being of souls to pacify the power of the state or the dictatorship of ideas,” he said.

Bishop Athanasius Schneider had argued that as long as grocery stores “are open and accessible and as long as people have access to public transportation, one cannot see a plausible reason for banning people from assisting at Holy Mass in a church. One could guarantee in churches the same and even better hygienic protective measures.”