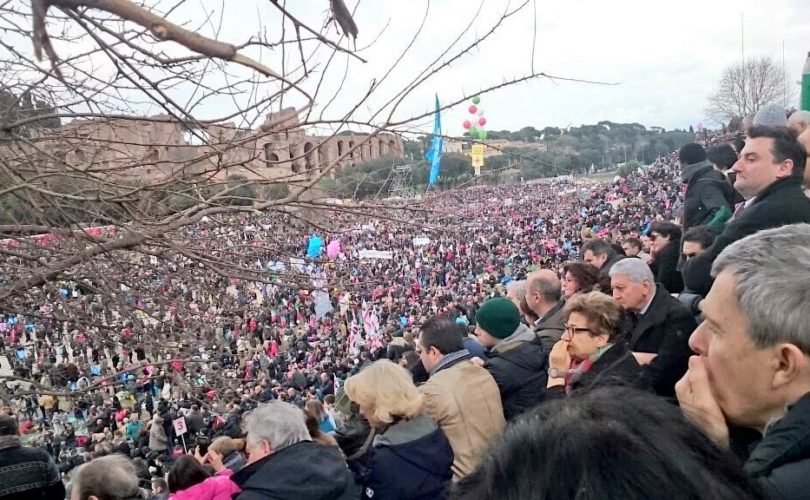 Massive crowds protested in favor of the natural family and against the civil unions bill on Family Day on January 30 of this year.

May 13, 2016 (LifeSiteNews.com) – Italy’s Chamber of Deputies voted this week to approve a bill instituting homosexual civil unions, despite massive protests against the bill by the nation’s Catholics earlier this year.

The bill, which passed with 369 votes in favor and 193 against, was already approved by the Senate in February, and will now become law unless it is vetoed by President Sergio Mattarella on Constitutional grounds, an outcome seen as unlikely.

Although the unions will not be called “marriage,” they will confer many of the rights and privileges of marriage, with the exception of the right to adopt, which may still be awarded by judges on a case-by-case basis.

The requirement of permanent fidelity has also been removed from the legislation. Studies indicate that high percentages of homosexuals live in “open relationships” without fidelity requirements. According to the 2010 Gay Couples Study by San Francisco State University, fifty percent of homosexuals in the San Francisco Bay Area said their relationships are non-monogamous.

The legislation’s approval came despite lack of popular support. A poll in January indicated that only 46 percent supported such legislation. Even fewer, 15 percent, support homosexual adoption. In January hundreds of thousands participated in a massive rally called “Family Day” to support traditional marriage, but to no avail. Days later, the legislation was passed by the Italian Senate.

While the country’s ruling socialists and their allies in the gay lobby rejoiced over the legislation, Catholics and conservative party leaders expressed concern and opposition.

Monsignor Nunzio Galantino, secretary-general of the Italian bishops’ conference, called the vote a “defeat for everyone,” and added that there is “a need for politicians that are more attentive, and who truly acknowledge the centrality of the family, made up of a mother, father, and children.”

The secretary of Italy’s Northern League party, Matteo Salvini, called on League party mayors to refuse to cooperate with the law, declaring, “Mayors of the League, disobey!” “It’s a misguided law, the anteroom to homosexual adoption,” he told the Italian news agency ANSA.

At least three right-wing parties, including the Fratelli di Italia (Italian Brotherhood), Lega Nord (the Northern League), and Unique Italy (Italia Unica), have indicated that they are working on initiating a referendum to reform the constitution to prohibit homosexual civil unions, according to the Italian newspaper Il Fatto Quotidiano.