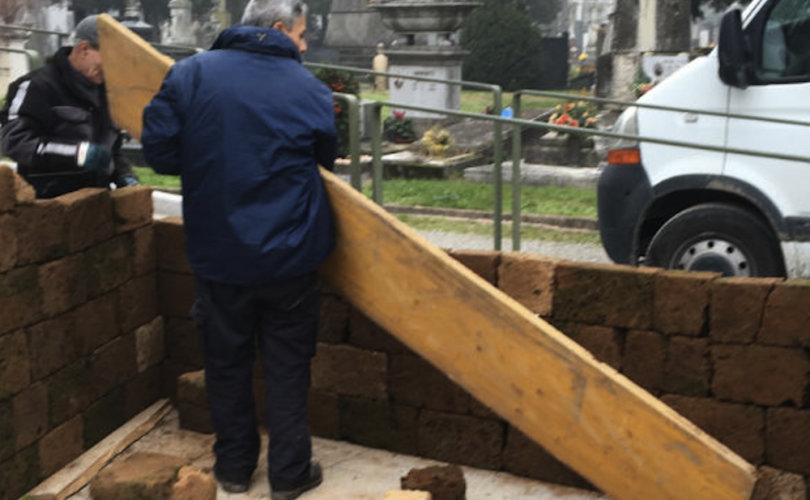 Workers begin to erect a Nativity scene at a Catholic cemetery in Cremona, Italy.

CREMONA, Italy, December 16, 2016 (LifeSiteNews) — The northern Italian town of Cremona will get its Nativity scene in the cemetery after all after the Catholic priest who refused to put it up for fear of offending Muslims was overruled by his diocese.

By the time Breitbart and Fox News told North Americans that Fr. Sante Braggiè was not going to permit the Nativity scene in Cremona’s cemetery, the diocese countermanded him, the municipality offered to help, and the work had already begun.

According to the vicar general of the Cremona diocese, Sante Braggie’s words were “falsely attributed” and the Nativity scene was to be installed. “The right integration and fraternal encounter among people of other faiths does not imply the cancellation of their roots and identity, but it demands respect, mutual exchange and knowledge of different religious traditions, especially when they — as the message of Christmas — transmit a message of peace and unity among all peoples.”

The controversy, commented Virginia Coda Nunziante, president of the Association for the Defense of the Family, demonstrated “the fear of the Islamic threat” of violence felt by many in Europe as well as ongoing secularist pressure for “the elimination from the public square of all symbols and evidence of Christianity.” Finally, she feared, it showed “a loss of faith” among priests.

The fuss arose when the local municipality tried to economize by foisting the job of putting up the nativity scene in the town cemetery (one of several the town government erects) on the Catholic church via the cemetery’s chaplain Fr. Sante Braggiè .

Father Sante Braggiè refused, stating, “The cemetery is a place of piety and remembrance, not of political confrontation. I must and will respect the sensibilities of those who think like us obviously from the religious point of view. … A small corner of the cemetery is reserved for Muslim graves. … A crib positioned within sight of them could be seen as a lack of respect for followers of other faiths, hurt the sensibilities of Muslims, as well as Indians and even atheists.”

The Corriere della Serra tracked down Fr. Sante Braggiè’s predecessor, who had presided over many installations of the cemetery Nativity. Fr Oreste Mori strongly criticized the decision, saying: “Seriously? I can’t believe it!”

“We cannot renounce our culture and traditions,” he said. “That would be an unpardonable weakness. I am, for the time being at least, in Italy, not Saudi Arabia.”

Civic and regional officials echoed the priest’s response and spoke out in defense of Christianity and tradition. Cristina Cappellini, the regional cultural minister, urged Fr. Sante Braggiè to “make a mea culpa … and apologize to the community.” She not only dismissed the idea that members of other faiths would take offense but invoked the persecution of Christians in the Middle East by Muslims.

“Reconsider,” she urged the priest, “think of all those Christian children still under the yoke of the Islamic State or under regimes practicing state atheism or not guaranteeing freedom of worship. Think about those families and those children who are not allowed to make the crib, and even the sign of the Cross, to those people going to Mass not knowing if he will return alive to their homes, those people for whom wearing a cross neck means signing their own death sentence, often after torture and abuses of all kinds. Think about the Christian cemeteries being desecrated in the Middle East, as happened just a few days ago in the Galilee, due to religious intolerance that destroys us in our humanity if we show ourselves weak and subject to those who reject our civilization.”

The municipal government declared, “The crib is neither right nor left [and] cannot be exploited for political propaganda. Let alone the crib and Merry Christmas to all!”

Nunziante told LifeSiteNews that the Cremona controversy is not isolated but expresses a spirit “dhimmitude” or subjugation to Islam found in “many of our pastors and bishops.” She noted Cardinal Reinhardt Marx’s November visit to Jerusalem to meet with Muslim leaders in front of the Temple Mount, where they all hid their pectoral crosses.

“In the spirit of ecumenism, they are avoiding every way of offending,” Nunziante said. She noted that many Italian schools no longer have Nativity scenes.

Nunziante added that it was understandable to be afraid of Muslim attacks but not to cover it up with “an ideological explanation. … Priests and bishops should defend our Christian roots.” When they don’t, she fears the basic reason is “they have lost their faith.”