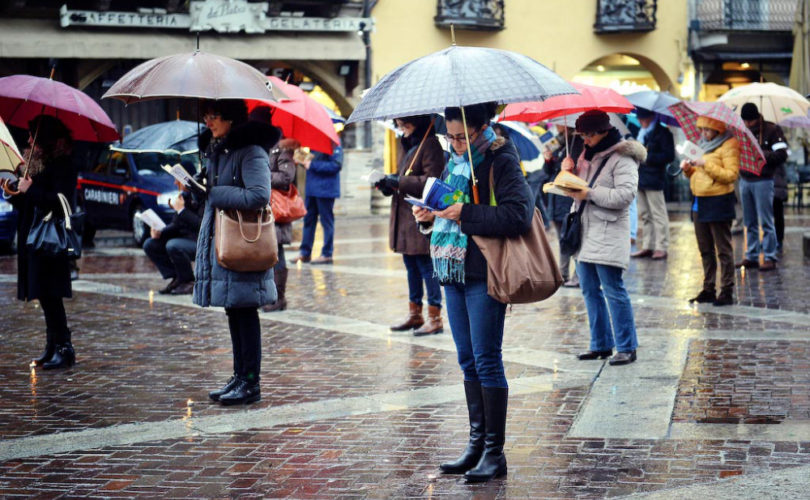 ROME — This weekend a priest was injured as hundreds of silent pro-family demonstrators were verbally abused and even violently attacked by homosexualist and anarchist counter-protesters at different venues throughout Italy. In Bologna, Turin, Genoa, Aosta, and Rovereto on Sunday, homosexualists and anarchists stepped up their attacks on the increasingly popular Standing Sentinels (“Sentinelle in Piedi”) demonstrations against “gay marriage” and the “LGBT” agenda. In 100 cities, organizers said about 10,000 people participated in the events.

In the northern city of Rovereto, although the Sentinels had obtained a permit for the use of the piazza, a group identified as anarchists arrived and demanded that the Sentinels leave. After destroying the Sentinels’ publicity materials, screaming threats and throwing eggs, the anarchists attacked, reportedly punching, kicking, and pushing participants. Despite being warned of possible threats of violence, police were not present when the assault began that resulted in two being taken to hospital: a priest, Fr. Matteo Graziola, and a young woman who has not been identified.

One policeman suffered bruises and a police spokesman admitted they should have arrived sooner on the scene.

Scenes of violence and verbal abuse are increasing against the Sentinel demonstrations, with participants requiring more police protection just to get to the events. In Bologna the scene was chaotic as Sentinel participants, described by Corriere della Sera as “ultra-Catholics,” to get to the event’s location were forced to run a gauntlet of screaming, swearing, and shoving demonstrators barely held back by police in riot-gear. The activists had been called out to demonstrate against the event by the national homosexualist organization Arcigay.

Bologna police were later forced to relocate the 100 or so Sentinels from their original venue of the Piazza San Francesco to the Piazza Galvani, where, still under police protection, they carried out their vigil surrounded by noisy protesters. A Sentinels spokesman told Tempi.it that the demonstrators were throwing bottles, spitting and screaming profanities, even though there were children in the group. At least one of the radicals appeared to have let off a smoke bomb.

He said, “About eighty people were unable to reach the square for the chaos, while many families with children were forced to leave. A mother pushing a pram with a one year old baby was covered with insults and spitting: this is the fact that has saddened us most of all.”

Instead of dispersing the shouting and threatening radicals, however, Bologna police decided to remove the Sentinels. At that point, local media reports, the radicals broke through crowd barriers and began to attack police, Sentinels, and some members of the rightwing party Forza Nuova. The altercation ended when police pursued the attackers who began to flee the scene.

An earlier “peaceful” demonstration against the Sentinels featured Bologna Municipal Councillor Kathy La Torre, executives of Arcigay, and people carrying the flags of the Communist Refoundation Party and Communist Youth.

In Turin the Sentinels were met with chanting crowds who shouted insults and threats and used a megaphone to try to shut the event down. Police with riot shields held them back and the demonstration continued, though at one point counter-demonstators tried to push down the crowd control barriers. Similar scenes were played out in Aosta where counter-demonstrators shouted during the Sentinels’ opening speech.

“A part of the area covered by the guards was completely invaded by counter-demonstrators. Even in that area, although surrounded, participants remained unmoved, without retaliating.” The Genoa group praised the local police “for their professionalism and dedication with which they avoided further degeneration.”

Toni Brandi, who helps organize and promote the Sentinel vigils, told LifeSiteNews on Monday that there are plans to launch a “denunzio” or legal action against police in Rovereto who, he said, did nothing as radical activists attacked the peaceful Sentinels.

Despite the description by the Italian press, the Sentinels are a non-partisan, non-denominational organization started in Italy last year in response to the pending “anti-homophobia” bill put forward by the gay activist Deputy, Ivan Scalfarotto. In the demonstrations, participants, who are from all walks of life, religions and ages, stand in a public square in evenly spaced rows silently reading. Opponents of the bill have said it will criminalize any expressions of moral or sociological objections to homosexual activity.

The group calls themselves not a movement but a “citizens’ resistance method,” and insists that the issue is about freedom of expression and the right of children to be raised in a family of a “mum and a dad.” They “watch over society” and “denounce every occasion in which [attempts are made] to destroy mankind and civilization.”

“Standing, silent and still awake for freedom of expression and the protection of the natural family based on the union between man and woman,” the group says. “Awake in the Italian squares in front of the places of power, with our large and silent presence we reiterate that it is not possible to silence the conscience of those who have their eyes open.”

Brandi said the homosexualist movement is growing increasingly enraged by the events and that police must protect the peaceful demonstrators from those who appear to have no qualms about violence, even against children.

“It’s quite worrying,” he said. “Very often the police, notwithstanding having been warned, do not do their job.” He said the pro-life and pro-family legal association Jurists for Life intend to launch a legal action against the police in Rovereto. “They came late and didn’t do anything about it.”

Brandi said Jurists for Life are also preparing an “exposto” or a briefing for the minister of the interior. “They threaten and attack us,” he said. “We don’t react. And we have to stop our demonstrations early for public order, while the police do not intervene and do nothing about the assault.”

“Just imagine the result if by any chance someone like me were to say a bad word to a lesbian. They would be immediately arrested,” Brandi added.

He compared the scenes to those similar situations in the 1970s when Italy’s political unrest was at its peak and far-left agitators staged regular riots. Brandi related having been involved in anti-communist demonstrations in the 70’s and said that the current situation is going the same way, particularly with the media supporting the left.

“In those days,” he said, “they were assaulting us, and if we reacted, we would be arrested, and the media would say it was we who were causing the unrest.”

He said that the response by anarchists, communists and homosexualists to the Sentinels this weekend was “not a coincidence.” “In seven, nine or ten places there is violence in the square? Of course it is not an accident. These are professional activists. They do it intentionally, trying to goad one of us to react.”

“And you can be sure if one of us does react we will be the ones arrested. These groups are rich, definitely well funded, and have strong support in government and the EU and Council of Europe.”

The Genoese Sentinels’ statement raised similar concerns, saying, “An event that is duly authorized heavily is disturbed and cannot be conducted in the normal situation? What would have happened if roles were reversed? It is cause for concern that there is a claim of new rights that create a restriction of the fundamental right of freedom of expression.”