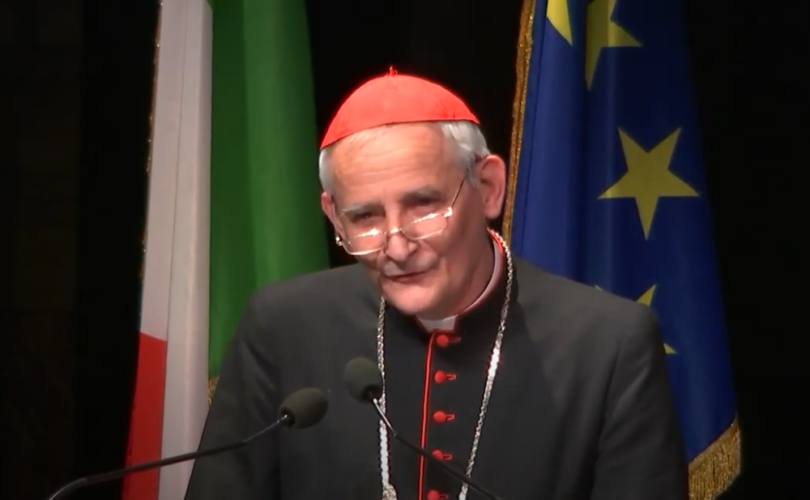 “First, the civil union at the registry office, then the blessing in church. It’s the first time a gay couple has been blessed in public in an Italian church,” reported the Daily Compass on Friday.

“What’s more, it took place in Bologna which is the diocese of Cardinal Zuppi, the president of the Italian Bishops’ Conference. An act which is in open violation of the Responsum of the Congregation for the Doctrine of the Faith which forbids such blessings,” lamented the outlet.

According to the report, the heretical event took place on June 11, the same day the homosexual couple was “united” in a civil ceremony.

After the civil union, the “couple” went across the street to the Catholic church of San Lorenzo where Fr. Davalli celebrated a so-called “Mass of thanksgiving” for the men.

When pressed by the Daily Compass about how a Catholic priest can offer a “Mass of thanksgiving” for a homosexual couple who lives in direct defiance of Church teaching, Davalli responded, “Because every Mass is a thanksgiving.”

“If you’re referring to the two young men, Giacomo and Pietro, who contracted their civil union, they participated just like all the other people who were in the church,” added the priest.

When asked if Cardinal Zuppi was aware of what occurred in his diocese, Davalli told the outlet, “Yes, I informed him myself.”

The blessing of homosexual couples has never been permitted in the Catholic Church, and the Vatican’s Congregation for the Doctrine of Faith reiterated this point as recently as March of 2021, as the number of heretical prelates who attempt to perform such blessings has been on the rise, particularly in Europe.

The apparent endorsement of homosexual relations among high-ranking prelates such as Cardinal Zuppi has become a pattern during Francis’ pontificate.

Earlier this month, Francis promoted pro-LGBT San Diego Bishop Robert McElroy a Cardinal, while promoting the equally pro-LGBT auxiliary bishop of San Diego, John P. Dolan, to be the Bishop of the Diocese of Phoenix, Arizona.

Reacting to this trend and in particular the recent event in Bologna, the Daily Compass writes:

It is here that all the pharisaical hypocrisy of certain pastors emerges, who are then quick to accuse others of pharisaical formalism. What people do not want to see is the objective disorder of these unions and the sinful nature of homosexual acts. And the shepherd, instead of calling the sheep back, proudly leads them on the road to perdition.