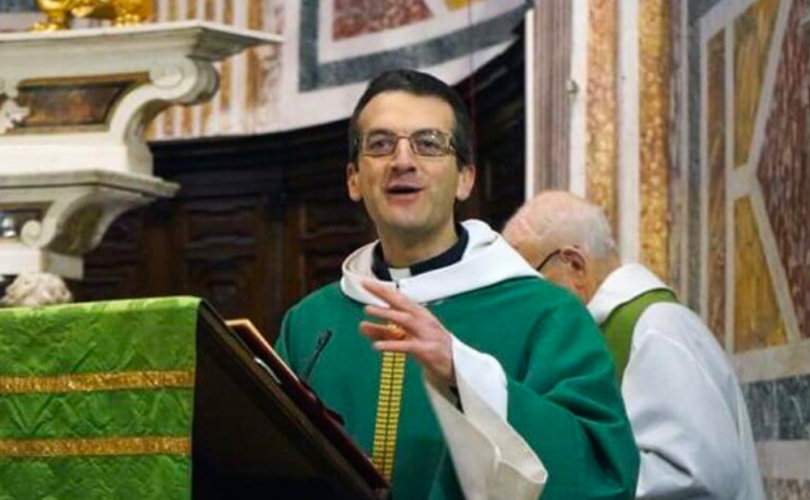 Bishop Luigi Ernesto Palletti of the northern Italian Diocese of Spezia-Sarzana-Brugnato issued his decree against Father Giulio Mignani on October 3.

Palletti’s statement referenced Mignani’s repeated “public utterances not in conformity” with the Church’s Magisterium, which had led to his incurring the latae sententiae suspension from public ministry. The statement read:

Don Giulio Mignani, as a result of the repetition over the years of a series of his public utterances not in conformity with the Magisterium of the Church, had in December 2021 already been recalled by the bishop by a formal act to the observance of the pastoral and canonical commitments freely assumed by sacred ordination and by the exercise of the office of parish priest, establishing that if this was not observed he would incur, latae sententiae, suspension from the public celebration of the sacraments and sacramentals, and from preaching.

The statement further noted that Mignani had not heeded this warning from his bishop, and had continued his public opposition to Catholic teaching:

Unfortunately, Fr. Giulio, in recent months has continued to make further externalizations and, therefore, it has come to be declared that he has incurred the aforementioned suspension.

Mignani’s public heterodoxy became widely known in spring 2021 when he refused to bless palms on Palm Sunday in an act of protest against the Vatican’s March 15 affirmation of Church teaching regarding the prohibition of blessings for same-sex couples.

“If I can’t bless same-sex couples, then I don’t bless palm trees and olive branches either,” Mignani said.

At the time, Italian news outlets reported that Mignani clearly used the liturgy as a protest regarding the ban on blessings for same-sex couples, declaring how he was happy to decline to bless palms in the face of the recent document. “In the church everything is blessed, not only the palms but sometimes, unfortunately, even the weapons have been blessed, but you cannot bless the true and sincere love of two people because they are homosexuals,” he said.

“But even more serious is the fact that their love continues to be called ‘sin,’” Mignani continued in his 2021 Palm Sunday address. “It is certainly not homosexual people who lose out, who can easily do without the blessing of the Church, because in the meantime there is God to bless them. It is rather the Church that loses.”

After his 2021 protest, Mignani was strongly criticized by the diocese, who said “it is reprehensible to omit or perform a liturgical gesture by linking it to a personal protest, all the more so if it is directed against a pronouncement of the Congregation for the Doctrine of the Faith, which the Holy Father has given his consent to publish.”

The diocese’s March 2021 statement added that the matter was “being assessed in the appropriate forums, in accordance with current canonical norms.”

— Article continues below Petition —
Join Bishops in calling out Pope Francis' statement for contradicting the faith
Show Petition Text
5688 have signed the petition.
Let's get to 6000!
Thank you for signing this petition!
Add your signature:
Show Petition Text

What Palletti’s latest statement reveals is that Mignani received a more severe warning in December 2021, advising him that a continued promotion of such views would incur the automatic suspension of his public ministry.

‘I don’t think I will’ change

Speaking to Vanity Fair Italy after receiving his notice of suspension, Mignani said that he had already received rebuke from Bishop Palletti for supporting abortion and euthanasia. The Church’s prohibition of these “is now dated,” he said.

“To quote a parable of Jesus, today we do not have a lost sheep and the other 99 in the enclosure, but the opposite. People realize that these are outdated things,” said Mignani, arguing for a change in Catholic teaching.

Despite being barred from public ministry and ordered to a period of quiet reflection, Mignani told Vanity Fair that he did not anticipate changing his position.

If I went to the bishop with a different soul, I would repent, he would probably readmit me, but I don’t think I will. I am not one with dogmatic positions, but the choice I made has profound reasons, it seems difficult for me to be able to change my mind.

The dissident priest referenced that he was supported in his pro-homosexual views by a number of clergy, even “prelates.”

“I have been approached by several prelates who totally agree, for example, on same-sex couples,” Mignani said. He added that “the majority” keep their support for same-sex couples quiet, afraid of being suspended. Mignani continued:

They say then that they help quietly, person by person, without taking a public position. “If we are in we help, if we are out we don’t,” they say. Yet sometimes you have to take a stand in front of everyone, to give a new direction.

“I have a dream: that one day the acceptance of homosexual love would be said by a Pope,” Mignani declared. “How powerful would it be?”

The 52-year-old priest’s public advocacy for non-Catholic views is by no means a recent development. Vanity Fair Italy noted that his support for same-sex blessings dated to 2017, when he promoted them in his church.

At another of his previous violations of ecclesial teaching in 2018, Mignani organized and held an event advocating euthanasia and the withholding of nutrition toward the end of life. On that occasion also, the diocese issued its own public response, clarifying what is taught by “the official documents of the Church.”

Mignani told Vanity Fair this week that although he had previously planned to leave the priesthood, he intended to remain a priest as “there are so many ways to have faith.”