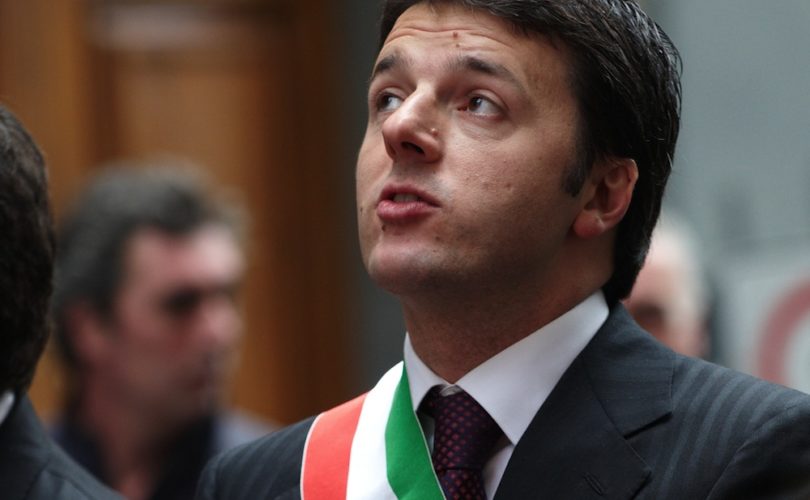 ROME – Italy’s recently-elected prime minister announced last week that his government will bring forward the long-expected same-sex civil unions bill and it will debated in the Chamber of Deputies by September. Matteo Renzi said that the bill will create a complete equivalence to natural marriage for purposes of tax, inheritance, and social welfare programs like health care insurance.

“The rights will be the same as married heterosexual couples,” Renzi told La Repubblica. The only difference, he said, will be that same-sex partners will not be allowed to adopt children outside the union, though the bill will include a provision for “stepchild adoption.” The bill will also recognize same-sex partnerships contracted outside Italy.

“We have brought together the various proposals in two texts ready to go in the chamber,” said Monica Cirinnà, a senator and the rapporteur of [Italy’s] Democratic Party in the Senate Judiciary Committee.

Ivan Scalfarotto, vice-president of Renzi’s Democratic Party and the promoter of the anti-homophobia bill, said, “In a perfect world I would like to have gay marriage in Italy, but I would rather have civil union immediately.”

“But I believe that together with civil unions we should return to the discussion of homophobia, and [to have] all the marriages of gay couples celebrated abroad directly registered in Italy as civil unions,” he said.

Scalfarotto’s bill passed the Chamber of Deputies in September after many amendments, but remains stuck for the moment in the Senate committee.

Some homosexual activists see Renzi’s as a compromise with what they regard as entrenched “homophobia” in Italian culture. Francesco Lupo, a political activist and candidate from Palermo with the populist Movimento 5 Stelle (Five Star Movement), which threw its support behind the homophobia bill, wrote on the Facebook page of ILGA Europe that there is little trust Renzi will do more than pay lip service to the LGBT movement’s goals.

Lupo wrote that the skepticism grows considering the failure of the homophobia bill to pass in the Senate this spring and noted that the new government has yet to appoint a new Minister for Equal Opportunities. “This could be the right sign to understand how much Mr. Renzi cares for Civil Rights = Zero,” he wrote.

Lupo, whose portfolio in his party is to “raise awareness of LGBT issues,” said that a civil unions bill would create “something like a ‘bus only for whites’ and a ‘bus only for blacks’.”

He said his party has promoted “marriage equality” since March 2013, noting that same-sex “marriage” has been approved in countries across Western Europe. “It means half of Europe has stopped marriage discrimination. Why is Italy running on the wrong side of the History?” Lupo wrote.

Those opposing the civil unions bill, who have already set up a petition against the proposal,  warn that the progression from civil unions to “gay marriage” will simply match the pattern of other countries.

The sociologist and religion expert Massimo Introvigne called the bill a ruse, the “pill of Mary Poppins” that puts a sugar coating on “gay marriage” to make it more palatable to Italian politicians with Catholic constituents. Introvigne, one of those warning that the Scalfarotto homophobia bill will be used to bludgeon Christians into silence, wrote in the Catholic paper La Nuova Bussola Quotidiana that Renzi’s proposal is a “trap for Catholics.”

The proposal will provide an out for politicians playing both sides, Introvigne warned. Catholic politicians who accept “civil partnerships” would be able to maintain the appearance of continuing to support traditional marriage and the family.

Renzi’s proposal, Introvigne continued, “has the taste of British sugar.” If it is modeled on the British method as well as the law, the outcome is inevitable. Britain’s civil partnership law, step by step, created an exact legal equivalency to marriage.

“There remained only the final touch: adapt the laws to language and reality, and change the name from ‘civil partnership’ to ‘marriage.’”

“In England, many were convinced that ‘homosexual marriages’ were already there, and for years. So it will be with us: first ‘civil unions’ will be made ​​for the Catholics to digest the sugars with the help of Renzi, then the newspapers will begin to call the ‘civil-united’ husband and husband and wife and wife and eventually will stealthily put an end to the hypocrisy, calling the ‘marriage’ what in fact it already was.”